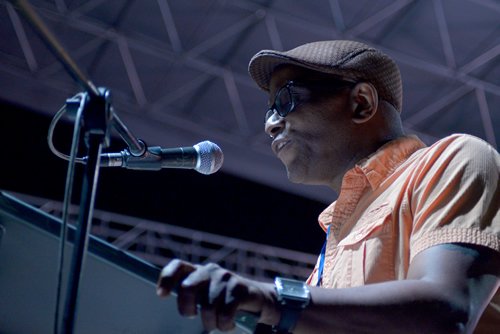 Tyehimba Jess in the inauguration of the 29th Medellin International Poetry Festival. Photo by Sara Marin

Once burst loose from human bondage,

do our songs still tow our pain like a mule?

Tell me, if we done burst loose from bondage,

do our songs still carry hurt like a mule?

homeward, pulling our lost cargo through.

If this freight of psalm should hit a rock

we’re gonna do just what the old folk do.

If this load of song ever strike on rock

we gone do what we was born to do-

till all of heaven bleeds out of blue.

Every time we split our mouths to song

We boil the air with hallelujah’s balm

‘cause each of us got a story to yell

out in song. Mine starts with my lonesome

crying in the dark. Pa’d whispered: They gone sell

me in the morning, son. By five years old,

I was orphaned. By eight, it was war.

I got conscripted by the Rebs. They told

me Yanks weren’t fit to live. That they fought for

raping and pillaging nigger skin. That

free will was just a trap. A deck of cards

stacked against black. Well, now I full see what

they ain't want me to believe. It’s a far

sight better than those chains that held us hostage-

Ma’s singing would make our slave shack a palace.

In the night’s soft pitch, her voice would outshine

any moon – moaning with a wanting way

that broke winter’s hold to warm us. Oh yes... I

can still feel her woolen hum.  ‘Specially when

bought us free.  He’d earned cash by keeping the freeze

of winter stored in summer. It turns out

Nigger ice gets just as froze as Whites'! he'd

declare. We rose from slave house to icehouse

thanks to southern heat. See, I’ve got daddy’s cool, steeled

by mama’s blazing hymns. When we sing, I feel

them songs getting freed up from tangled cane fields.

tangled up in the work of the dirt with

the hurting of the lash. Now, I was real

lucky. I was a tailor’s 'prentice.

But then I got sold to a slave trader.

on, someone slipped me that  Proclamation

each tongue spinning spirituals into tens and ones

to buy Fisk its spellers and bricks. Here we are,

John William "Blind" Boone caught encephalitis at six months.
The treatment was removal of the eyes.

Bless the fever in that night
in the sixth month of my life.
Bless the fever, for it gave me sight;
it swole my brain to fit God's gift.
It brought the hand that would lift
each eye from my infant skull.
Bless the sweat; my baby bawl.
Bless the horse that hauled
the surgeon through dusk's dark,
half drunk and swearing, into mine.
Bless the flame - it sterilized
the metal of the spoon.  Bless
the path between lid and bone,
slipped and slid by that instrument
of my deliverance from sight.  Bless
the handling of the knife.  Bless
that night that gave me night,
wrapped it 'round my bloody
face, whispered how I could be
grace notes, arpeggios, a piano roll
of sound copying each note
from everything around me.
You see, I'm sure at first
there was the hurt
and the scalding pain.
But then again, bless
an infant's too short
memory. All I know is
what lies beyond light.
I've learned this is what's right
for this one right here.  Yes, bless
the fever, then listen close.
Spare an ear to this piano
and shut your eyes closed...

Tyehimba Jess is the author of two books of poetry, Leadbelly and Olio. Olio won the 2017 Pulitzer Prize, the Anisfield-Wolf Book Award, The Midland Society Author’s Award in Poetry, and received an Outstanding Contribution to Publishing Citation from the Black Caucus of the American Library Association.  It was also nominated for the National Book Critics Circle Award, the PEN Jean Stein Book Award, and the Kingsley Tufts Poetry Award.  Leadbelly was a winner of the 2004 National Poetry Series. The Library Journal and Black Issues Book Review both named it one of the “Best Poetry Books of 2005.”

Jess, a Cave Canem and NYU Alumni, received a 2004 Literature Fellowship from the National Endowment for the Arts, and was a 2004–2005 Winter Fellow at the Provincetown Fine Arts Work Center. Jess is also a veteran of the 2000 and 2001 Green Mill Poetry Slam Team, and won a 2000–2001 Illinois Arts Council Fellowship in Poetry, the 2001 Chicago Sun-Times Poetry Award, and a 2006 Whiting Fellowship. He presented his poetry at the 2011 TedX Nashville Conference and won a 2016 Lannan Literary Award in Poetry. He received a Guggenheim fellowship in 2018. Jess is a Professor of English at College of Staten Island.