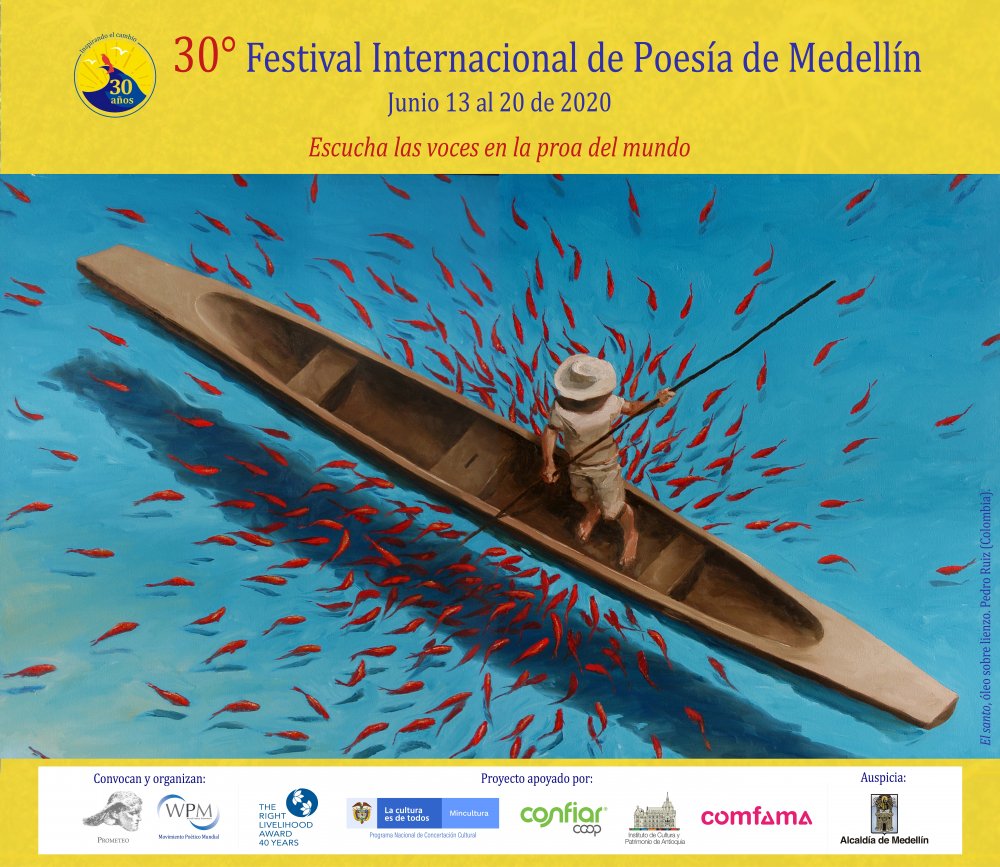 With the participation of 100 poets and invited from more than 45 countries, 125 activities will be held, including poetry readings, concerts, workshops, conferences, conversations, panels and artistic interventions.

The essence of the Festival and the training processes that it has generated establish close links with the community, in order to move forward together for the construction of a new culture, for humanity freed from the thread of violence, so that lasting peace could be possible, democratic participation, cultural rights, while respecting their free expression, life and caring for the planet.

Amongst the 130 scheduled activities of the Festival, these include those programs related to the 24th International Poetry School of Medellin as its pedagogical component.

It is significant that by 2020, the 30th Medellin International Poetry Festival has been chosen by the organizers of the Alternative Nobel Prize (Right Livelihood Award -RLA-), headquartered in Stockholm, Sweden, to jointly celebrate the thirty years of the Festival and the forty years of existence of this prestigious global award, which promotes the defense of human rights, to protecting the environment of our planet, the fight against nuclear war and defuse conflicts.

In this perspective, the International Conference Inspiring Change through Culture (June 14-16) will be implemented, with the goal of increasing awareness worldwide to promote change, the conversion of history with ongoing coordinated and permanent powerful actions between participating delegates and organizations contributing to a  culture of peace and for the protection of the planet.

At the Conference Inspiring Change through Culture, will participate 20 laureates, from different parts of the world, who have received the Alternative Nobel Prize, with acknowledged mastery for their contributions on a variety on global issues, dealing with social conflict resolution, related to human rights and committed to the preservation and caring of the planet.

Jointly with the Alternative Nobel Prize laureates, 30 guests will participate in the Festival, including poets, philosophers, scientists, peace and environmental activists, indigenous leaders in stewardship of the land, anti-nuclear activists, statesmen committed to change and representatives of organizations demanding the end of war and the preservation of the planet.

The Conference will also feature the presence and participation of representatives of the World Poetry Movement, a global network that integrates poetry festivals, poetic projects and poets from the five continents, joined for a common cause through campaigns and actions contributing to world peace, the defense of life on the planet, for the sustainable development in a new world, for the restoration of beauty, dignity and truth, as part of a continuous assessing process for strengthening the presence of Poetry in our contemporary society. Its coordinating committee that is led by the Medellin International Poetry Festival is made up of poets and directors of international poetry festivals from India, Nepal, Turkey, China, Kuwait, France, Sweden, South Africa, Morocco, Ghana, Kenya, Colombia, Chile, Panama and the United States of America.