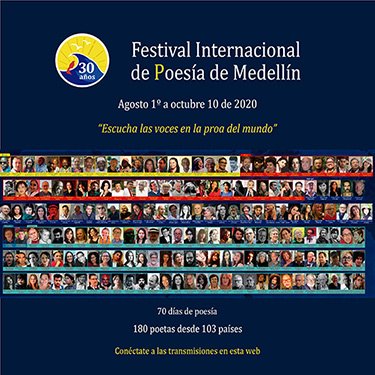 With more than 200 poets and speakers, this year’s Medellín International Poetry Festival, which is currently being held online, is set to be the largest virtual poetry festival ever to take place, the festival’s Co-founder and Director Fernando Rendón has said.

The annual Colombian poetry festival, which was awarded the 2006 Right Livelihood Award for creating a safe space for communities ravaged by violence to come together through art, is going ahead online against the backdrop of severe social and financial insecurities brought on by the COVID-19 pandemic.

Rendón started the festival, which was first held in 1991, as a beacon of hope in the city of Medellín, which had been overrun by terrorism, political violence and drug-trafficking, keeping residents off the streets after nightfall. The festival’s aim was to organise poetry readings in public spaces to re-establish cultural life and help residents reclaim their city.

Today, the festival is among the most prestigious poetry events drawing people from around the world to celebrate art, democracy and freedom of expression, and discuss solutions for some of the world’s most pressing problems.

However, with COVID-19 raging around the world, the poetry festival’s future came into serious doubt as the organisers faced diminished funds and wide-ranging social insecurities in Colombia.

“Our work has been severely impacted,” Rendón said in a recent interview. “We have lost almost all the financial support.”

This has put the festival into “a very, very difficult situation,” he added.

However, the organisers decided to reshuffle their plans and move the festival completely online. The festival is now being held from August 1 to October 10. Over the course of 70 days, 180 poets are set to participate from more than 100 countries. There are a total of 130 online activities planned.

“This will be the largest virtual meeting of poets in the history of culture,” Rendón said. “It is of even greater significance that such a vigorous presence of poets comes in a time of large-scale human confinement.”

For Colombians, the festival comes again at a crucial point in time when tensions are rising and many people are struggling.

“Social discontent is enormous and is persistently repressed in a brutal way,” Rendón said. “There is currently no way out of this situation and the social struggles are continuing.”

Before the pandemic, Colombia had just begun to emerge from a decades-long civil war following a 2016 peace agreement with the leftist guerrilla group Revolutionary Armed Forces of Colombia (FARC). With the already fragile peace agreement threatening to unravel, the country is now also suffering from painful financial and social setbacks due to the pandemic.

He said that it was clear that the current economic system, compounded by widespread corruption and continued violence, was tearing Colombian society apart.

“This shows that only solutions of mutual collaboration on a large scale and of a collectivist and profoundly democratic orientation can guarantee the survival of human society and nature,” he said.