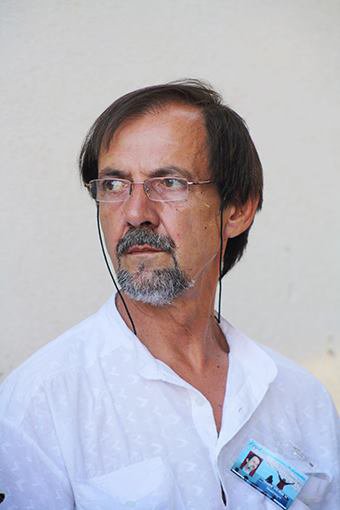 Not Of This World

Another place
Does it exist
Beyond waned Time
Descriptive senses
Self-consciousness in the
framework of chaos
lies in problem,
without him
Freed from
the fate of self-punishment
which are so needed by the Master
We are drowning
Into Eternal peace
and without It we persevere
if bad blood
replaces faith

Sreten Vujović was born in Cetinje, Montenegro, in 1957. He is a poet, essayist, translator, storyteller - even for children -, a primary and secondary teacher in his country and abroad, and a sculptor. In his production, he gives voice to life's experiences: love, fatherhood, exile and the commitment to freedom. In particular, his love poems compose an unprecedented journey that is still angelic while remaining carnal, a path with a wide horizon and high intonation, where the aerial breath of the impulse to good opens with paradoxical tenderness the door to the mystery of love.

He is the author of the poetry and prose books: The song of the forgetful bird, 1982-1983; Decapitated Round, 1983; Special Room (Room for Special People), 1986; The Book of Genesis, 1991; How the horizons sink, 1995; How to return (Memories of exile), 2001; Love Poem, 2006; Devilish round in front of the monastery, 2008; Big Brother, 2009; Leader, 2010; Prayer, 2010; Selected stories and Tommy, my friend-monodrama, 2011; and The Great Diabolic Cloak, Trilogy, 2015. His poems and prose have been translated into English, German, Italian, Polish, French, Galician, Romanian, Macedonian, Albanian, Slovenian, Ukrainian, and Belarusian. He is a member and one of the founders of the Association of Independent Writers of Montenegro and the Montenegrin Center of P.E.N.