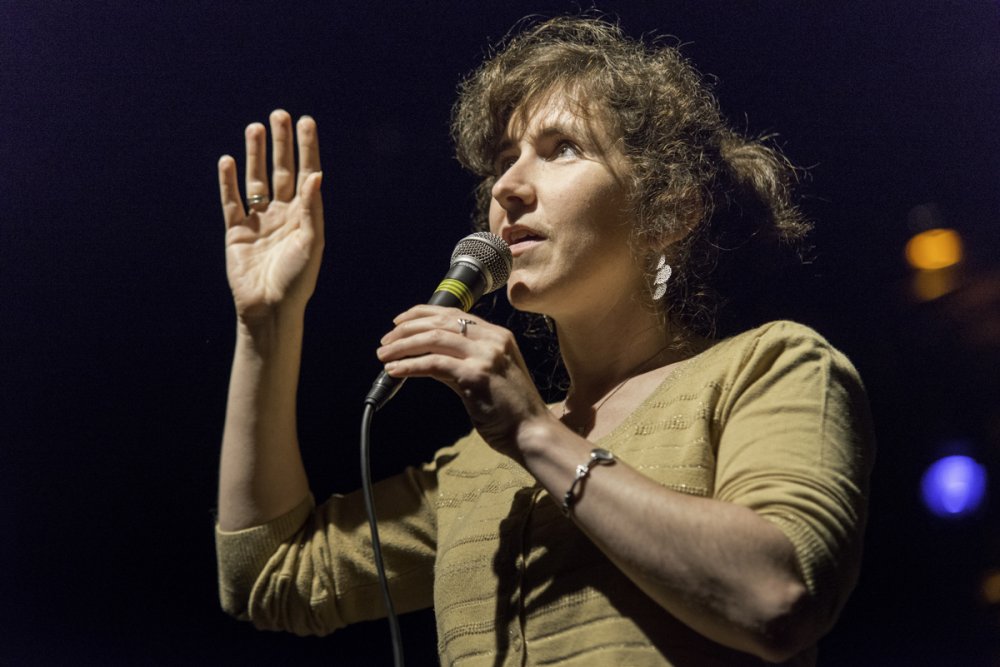 I grew up as the daughter of parents who worked hard. My father was a bricklayer and my mother maintained our farm. We had cows and pigs and land on which we cultivated corn. My elder sister was a real out-of-door child. In her little boots, she’d trot along to the stables beside our father or help out in the vegetable garden, and she loved nothing more than to pull up the weeds that grew between the cobblestones. I, on the other hand, always preferred to curl up and read a book in some corner or other of the house. We didn’t have many books at home, but my grandmother once gave me an encyclopaedia that I really liked. We also had books of fairy tales and comics lying around and we regularly went to the library with our class at school. While my parents kept busy keeping the real world going, I would go off into a completely private world of my own.

I’ve often felt guilty about that. Not so much from any feeling from within, but because my mother often called me to order if I disappeared too long from the face of this planet. “Come on”, she’d call, “No more books, let’s go outside!” I’d struggle into my boots and traipse after her. As a child, I was terribly clumsy, tripped all over the place, bumped into everything, and let easily breakable things slip through my fingers. I wasn’t much use outside either, and my mother was constantly grumbling about the fuss and bother I made about it, but she must have thought that getting me out and about was more useful and worthwhile than leaving me to sit inside turning pages. She often said that ‘going out’ was something I needed to learn if I was to get along in life at all. Then, when I turned into a teenager and discovered I could sing quite well, some boys in my class invited me to be the lead singer in their band. For the first time ever, I caught a glimpse of a somewhat different interpretation of ‘being useful’ and ‘functioning more or less effectively’. But when I tentatrively tried out this new enthusiasm of mine on my mother, she would have absolutely none of it and refused point blank to let me join any band. “You’re not going to end up mopping the streets,” she said. “There are more important things to do.”

Later, as a student, in addition to reading a lot, I also started writing intensively. As a teenager, I’d kept a diary, but doing so hadn’t really had much impact on my daily life. But once I’d installed myself into my own room in Ghent, I found myself perfectly capable of spending all day long in my pyjamas, stuffing myself with the unhealthiest available junk food while tapping away at my computer. At that time, I joined a website for amateur writers and the regular feedback on my texts gave me a good deal of encouragement. The chance to chat to other website-members also meant I was prone to falling in love with those who were as deeply into reading and writing as I was. As things turned out, I even married one of them.

Today I live with a writer and earn my living by writing and giving writing courses. I no longer spend whole days wallowing in my pyjamas, perched in front of my PC.  I’ve children of my own, to whom I have to set an example. But whenever I get down to writing, I still have the sneaking suspicion that what I’m doing isn’t particularly ‘useful’. In my head, I keep hearing a voice that sounds like my mother’s reminding me, “There’s still a pile of dirty dishes in the kitchen.” “You really ought to vacuum the house.” Or “Levi’s coat’s got grubby and could do with a wash.”

And yes, it’s true, when I do the dishes, I know that in half-an-hour or so I’ll have clean plates and glasses again. Whenever I get the vacuum cleaner out, the house feels a good deal fresher and more welcoming, and if I do get round to washing my son’s coat, I can even find myself beaming with satisfaction. But as for deciding to sit down at my PC to write something, whether it’s a piece of prose or a poem, there’s absolutely no guarantee that anything worthwhile will take shape, even in a day or half-day, let alone half-hour. Writing simply can’t be approached as any kind of chore. When you aim to create something new, you take the risk that nothing interesting may come out of it, that you may be wasting your precious time on something useless, that you perhaps won’t achieve anything at all.

Writing without reservations involves being prepared in advance for such scenarios, but I regularly struggle with this attitude. I know I’m not the only one. For ten years now, I’ve been teaching people who entertain the ambition to write, and each and every one of them comes across the same obstacle: being uncertain whether they’ll actually produce anything. A constant struggle with ‘value’ emerges, and of course in this predicament, ‘economic value’, ‘worthwhileness’, and one’s own sense of self-worth are all inextricably tangled up together. Unfortunately, devoting oneself to writing almost always means being doomed to lose the financial battle.

All the same, writing poetry is still a fairly ‘cheap’ art. I don’t need many materials for it, I don’t exploit or use up too many of the earth's precious resources, and I can get into it and do it all by myself. Making a poem is an entirely solitary activity. Nor can I imagine for a moment how high the threshold of genuine ‘doability’ would be for me if I were to set out to make a work of art out of anything less flimsy or more durable than a piece of cardboard – for example, by composing music,  writing a play or directing a film – for all or any of which activities I’d need to involve hordes of other people. And anyway, how would I get started in the first place, without still being able to make time to do the washing up?

If making art is such a burden, what then motivates me, or any poet or artist? What makes an artist dare to make things that often involve not knowing either where to start or to go next?  This is the paradox: the tricky thing about creating art is also precisely what brings the artist the most satisfaction. It’s just because the creating process is so 'difficult' that it gives such a sense of fulfiment. It’s about the unique combination of tranquility, ideas and emotions. And it’s about being fully absorbed by something, and the challenge of inventing something new. This last factor is unique to art and involves stepping out of your comfort zone, exposing yourself, going deep into yourself, into the otherness inside yourself, and bringing out something you never even knew was there. And then – in the end, after much effort and doubt – sometimes something unexpectedly gets delivered. Something that enables a poet or artist to rise above herself. Something that may even survive all the washing-up routines, menial mending jobs and chores for children. And this, exactly, is what gives the artist courage. And this is what drives me not to give in.

This brings me to something the American actress Phylicia Rashad said: “Before children talk, they sing. Before they write, they draw. As soon as they stand, they dance. Art is fundamental to human expression.” This perfectly expresses my belief that, far from being merely part of ‘culture’ that’s ‘removed’ from ‘nature’ – as is conventionally thought to be the case – a person lucky enough to be able to lose herself in art and poetry is actually the closest to her natural state: that is, to her own inner natures. Art and poetry seek out and often find the very deepest points of contact within a person and between persons. I often notice a soft, disarming, disarmed look in the eyes of a person who has been ‘touched’ by a poem, by any poem. What's more, if this poem happens to have been made by (and through) me, that person will have understood me too, and on a very deep level, even though we may not know each other at all. And not only that: that person will have undertstood herself/himself too on a deeper level.

In fact – and without getting too technical here – scientists have shown that in the early stages of life, a person’s brain will build more connections if s/he is stimulated – and even challenged – through and by art. The more synapses are created, the more complex the brain becomes, and the thicker the cerebral cortex. And a thicker cerebral cortex developed early on in life in turn means that a person is able to think and perform more clearly and effectively: for example, in speaking and calculating, and in many other essential functions and activities. And apart from this direct enrichment, a thickened cortex will even protect a person against age-related diseases. I once read that looking at a work of art can make a person as happy as gazing deep into the eyes of a loved one. If you take this as a starting point, then you immediately know how poetry – and here I mean the entire culture of art and poetry – can release human potential. And can even, perhaps, ultimately contribute to peace and justice.

That a poet like Fernando Rendon – despite the many headwinds and the constant struggle to free up resources – is able to organize meetings among poets and artists and, above all, to bring art and poetry to very large numbers of people, is wholly admirable. I believe that every heart that’s touched during the many events that go to make up this huge Festival of Medellin is a heart that’s been won forever. And this is also why it’s an equally huge honour for me to be part of Medellin’s thirtieth International Poetry Festival. Opportunities like this not only encourage me to dedicate myself more deeply to what I love spending my time doing, but also give me the right to speak with increasing pride about it. Above all, being here makes me enormously grateful.

Sylvie Marie (b. Tielt, Belgium, 1984) is a Flemish writer/poet living in Ghent, Belgium. She is the author of four poetry collections: Zonder(Without), Toen je me ten huwelijk vroeg (When you asked me to marry you), Altijd een raam (Always a window) and Houdingen (Positions). As for prose, Speler X(Player X) was published in 2013, a football-novel she co-authored. Very regularly, she publishes in literary magazines and her poems are translated into quite a few languages. She has won several poetry slams and likes experimenting on stage and interacting with the audience. She has performed on attics, in cellars, in castles and stables, on boats and on islands, on the stages of rock festivals and in intimate rendez-vous hotel rooms. In 2017, she was awarded the Literature Prize from the province of East Flanders, Belgium.

Marie teaches writing courses in the art academies of in Ghent, Tielt and Ypres and is editor of the Flemish literary magazine Deus ex Machina. For the moment, she's busy writing her second novel and publishing cut-up poetry on Instagram.

Of Houdingen the Dutch critic Erik-Jan Hummel wrote: “Sylvie Marie is a piece of jewelry for  poetry”, the Herman De Coninck-prize jury report for Toen je me ten huwelijk vroeg stated: “Sylvie Marie writes poetry for readers. A lot of readers.”, and of Zonder, the Flemish popular magazine Humo wrote:  "Great talent can give voice to the mystery without killing it. Sylvie Marie is a great talent."