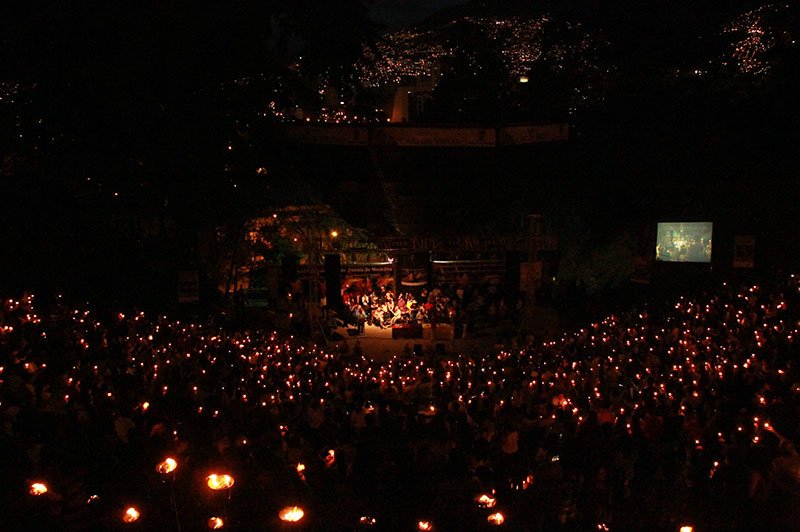 The Legendary Poetry Against Universal Suicide

In order to maintain its strength against the background of the already tumultuous political, military, economic and social situation in the country and worldwide, which clearly endangers the survival and future of life on Earth, the 31st Medellin International Poetry Festival will celebrate the wonder of existence between 1 and 29 August 2021, with the participation of 185 poets and guests from 100 countries, from all continents, among them the most important poets of our time.

The Festival, that will have as main theme for 2021 Memory, Survival and Future, embodies an active historical confluence of poetic forces in the world, which will express as a whole the voice of the human spirit rising from the ruins and ashes from wars and the desolation caused by barbarism, which plunders and excludes peoples and species, through the progressive destruction of nature, the mother of all living beings.

The severity of the crisis of the pandemic that lashes the human species, which affects about 195 million people, also adds to the problem the serious nuclear, military, political and economic tensions, as well as deaths and massacres that could have been avoided. 1,400,000,000,000 people in the world living in extreme poverty and another 900 million suffer from hunger and lack access to safe drinking water, health and education.

Poetry is the spiritual heritage of mankind, since the first civilizations in Sumer. It is the primeval art and the common substance to all the fine arts. As Cardoza y Aragón said, it is "the only concrete proof of man's existence", its sense of living, its confidence, in the certainty in the survival and future of humanity and our people against the hard trials of history.

Despite the fact that the Festival is recognized as Cultural Heritage of Colombia and that the Ministry of Culture of this country announced to have the highest budget in history for culture, the Government arbitrarily reduced the budget for the Festival by 50%, thus reflecting its reluctant attitude against poetry and against the Festival, so highly and universally valued as one of the meeting place, a capital of the world today.

The Festival expresses solidarity with the struggles of the Colombian people in its search for democratic freedoms, truth and peace with social justice. For more than three decades, year after year, the Festival is carried out to provide victims with assistance, those who are silenced under the extreme cruelty of the conflict, the excluded ones, the dispossessed and all those who struggle and are dreaming of a profound social change and a new life after the emergence of a fraternal and equitable country.

A group of personalities make up the special list of guests who will take part in the academic activities of the Medellin Poetry School, which will celebrate 25 years since its foundation, within the framework of the Festival. Among them, the indigenous activist Sheila Watt-Cloutier, governor of the Arctic Circle, and the human rights activist Jacqueline Moudeina (Chad), both recipients of the Alternative Nobel Prize (Right Livelihood Award), and who already have confirmed attendance; the philosophers Juan Arnau (Spain), Sergio de Zubiría (Colombia), Miguel Hernández (Mexico), as well as Sun Xintang (People's Republic of China), Fritz Ostermayer, the Artistic Director of the Vienna Poetry School (Austria), Anne Waldman, the Former Director of the Jack Kerouac Poetry School, and the journalist Daniel Coronell (Colombia).

Among the musicians that will participate we will count on the presence of DaGenius (Comoros Islands), slam pioneer in his country; the Iranian singers Reza Yazdani, pop-rock musician and Sahar Ajdamsani; the Cuban composer and musician Marta Isabel Campos Morales, and the Colombian singer and poet Carlos -Pala-, Miguel Hernández International Poetry Prize.

We expect a larger audience than in 2021, when the Festival reached 394,000 views from 110 countries. The 31st Medellín International Poetry Festival will be staged virtually and broadcast to the world through its social networks on Facebook (festivalpoesiamed) and YouTube (Revista Prometeo). The day-by-day schedule can be viewed here

The program will include, as in previous years, poetry workshops and stories of myths of the whole world for children in Latin America, through activities developed by the Gulliver Project, read here.

The 31st Medellin International Poetry Festival is organized and convened by Revista Prometeo y the World Poetry Movementl. It is sponsored by invaluable support of the Major´s Office in Medellin, the  Global Campus for Human Rights, as part also of the educational initiatives of the Right Livelihood Award Foundation and the Ministry of Culture. It also has the support of the Cooperativa Financiera Confiar, Comfama (Caja de Compensación Familiar de Antioquia), the Heinrich Boll Foundation in Colombia, Comfenalco Antioquia and Teleantioquia.

Several embassies accredited in Bogota have also been involved, among which we highlight the commitment of the Canadian Embassy, the Netherlands Embassy, the Ireland Embassy, the Spain Embassy, Norla (Norwegian Literature Abroad), the Goethe Institute in Colombia, Nederlands Letterenfonds (Dutch Foundation for Literature) and Flanders Literature.

All the information about the Festival and articles by invited poets