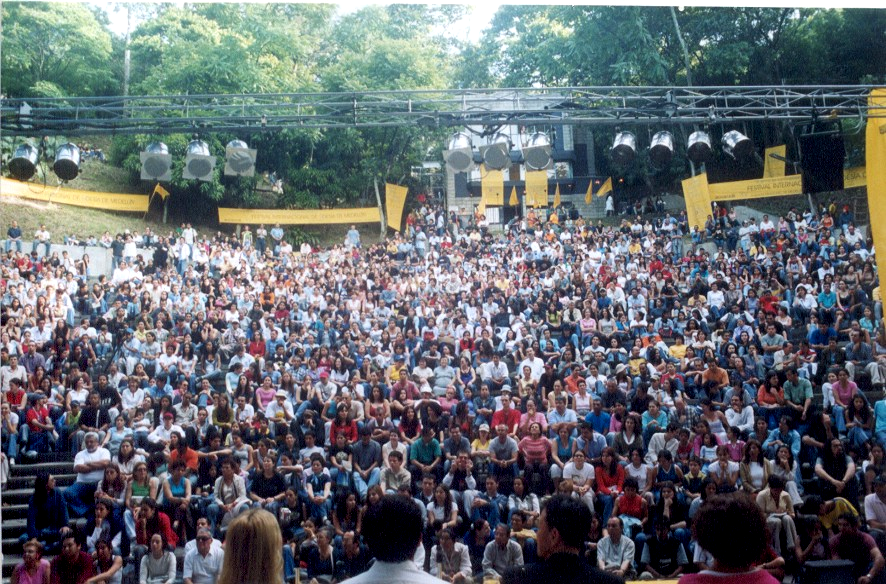 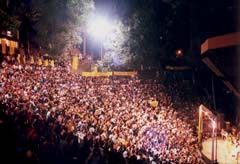 The famous phrase of Borges in his short story "Ulrika", "being a Colombian is an act of faith", has become very popular in Colombia. Is it really being a Colombian an act of faith? ¿Couldn't it be something more? ¿What is being a medellinense then? What is being in and belonging to a city that came to be classified as the world capital of drug trafficking, whose inhabitants saw children die by bullets shot from war helicopters, a city that the paramilitary have gradually taken through intimidation and blackmail?

But we are not and have not being just that. And we will not be just that. Asked about the Festival and the city, the Argentine poet Esteban Moore --who had already attended the event in 1995, a year in which he was miraculously saved from the bomb that destroyed "Bird", the sculpture by Fernando Botero- answered: "…today, June 23 of 2005, I return to the Poetry Festival of Medellín. The debris of the bombed bird is still there, as a testimony of the madness of those years; near it, Botero put a replica. Past and present meet in that very place… Medellín today is a city reborn, emerged from pain and madness. A city transformed by poetry. In the memory of that festival, the fifth one, the editorial stated: "this crowd is avid of life and not of death, of peace and not of war, of beauty and not of horror, of justice and not of misery, of communion and not of bombs."

"In this XV Festival, realized under the motto "For a peace more active than all wars," I find Medellín transformed in a city where you can leisurely walk on the streets in the company of a multitude that daily celebrates life." 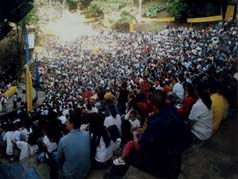 And how was the city and the country in 1991, the year in which was founded what is now considered the most important poetry festival of the world? It hurts to remember. The fear in which we lived. Under the rule of crime.

In the meantime, from 1991 to 2005, more than 700 poets (80 this year) from 125 countries of the five continents have come to the city, and hundreds of thousands of persons could get near to the best poetry written in the world during the last fifty years.

How do you explain this fervor? We don't know, but we do know that poetry has been a fundamental element in the changes that have taken place in the city. We also know, and this has made us stronger, that the space of our solitude has been reduced, just as we know, without the least shadow of a doubt, that although some somber forces have put their sinister arm on the city, the sense of justice and beauty that the young people of Medellín have demonstrated will finally make them move back. 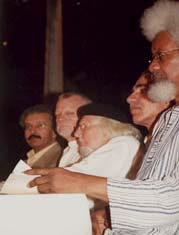 Medellín, of course, is not paradise. But some sort of miracle has been happening in these last fifteen years. An evident demonstration that reality, no matter how adverse, can be transformed. But, what is more, it can also be transformed with the help of the most unsuspected but maybe the highest means: that of poetry.

In conclusion, there is no profound analysis -and certainly this is not one- of the reasons that in this city subject to a long situation of poverty and violence, in which the phenomenon of drug trafficking reached levels of violence that even today are astonishing and in which the fight for local power has taken unsuspected proportions, there is such passion for poetry. One certain thing is that International Poetry Festival of Medellín has brought to light the enormous potential of its young people to oppose barbarity and to show its leaders that the option of life, justice, dignity and beauty, amply represented by poetry, are the only alternative left to us to find an integral way of development.

Because being a man or a woman in any place of the earth is much more than an act of faith, because poetry is something more than the testimony of the changes of humanity and of history, because poetry must be, and can be one of the forces driving these changes, nothing for the time being makes us think that the experience of Medellín cannot and also should not be repeated and replicated in any place in the world, because "we are one from the bottom of the centuries", and there is one only soul of the peoples that love liberty, beauty and justice. 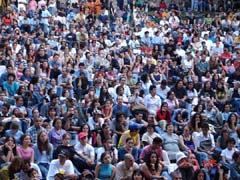 There are three questions that we would like to write about in this report on the XV International Poetry Festival of Medellín. The first, an extraordinary increase in the size of the audience in comparison with previous years, in which it was already very large. The second, the evident and ever greater qualification of the audience, doubtlessly achieved after its permanent contact with the best and most up-to-date world poetry, the nine consecutive years of the International School of Poetry of Medellín, and the regular publication of the review PROMETEO, with 72 issues since 1982. The third, the participation of new and key figures of contemporary poetry in the 2005 Festival, such as the winner of the 1986 Nobel Literature Prize, Wole Soyinka, the South Africans Antjie Krog and Breyten Breytenbach, the Briton James Fenton, the Japanese Shuntaro Tanikawa, the American Rita Dove, the Portuguese Casimiro de Britto, the Dutch Gerrit Komrij, the Iraqi Adnan Al-Sayegh, the Jordanian Ibrahim Nasrrallah and the Nicaraguan Ernesto Cardenal, among others.

The increase of the audience as well as its finer grade of appreciation of poetry is connected with several characteristics of the event: on the one hand, its open, plural and democratic character, and on the other, a careful and intense work of propaganda. Indeed, if you look at the program of the Festival you will notice that all social sectors were included: public and private universities, labor unions, private sector institutions, internal refugee's settlements, slums, libraries, prisons, streets and parks and Metro stations.

You cannot get around the fact that a good part of the success of the Festival is due to the strong and deep sense of local pride with respect to the event of the people of Medellín, because among other reasons the Festival has served the purpose of reducing our sensation of isolation, since in a certain way it has put the city in the world map of culture, and during these fifteen years it communicated its inhabitants with poets of 125 countries, a number that no other festival of poetry of the world can match. 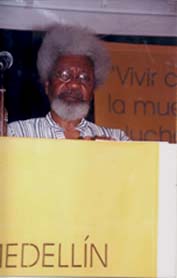 We must emphasize that the Colombian press did not properly cover the event. Except for some scant information about the opening of the Festival and the honest contribution of some columnists, the papers kept a shameful silence to such an extent that they even ignored the presence of the Nobel prizewinner Wole Soyinka, who was not interviewed by them.

The International Poetry Festival of Medellín has before itself a long way to go and much to do. Poetry has an enormous future, because without it there will be no reborn world, nor will a mother country for life on earth be built without its superhuman energy.

And our persistent call to the poets, the international festivals of poetry of the whole world, the poetry publications and associations of all continents, will always be the interchange of points of view, and greater, shared efforts to make the world a luminous and habitable place, thus contributing to the materialization of that old and new dream of a fraternal humanity free from its material and spiritual needs. 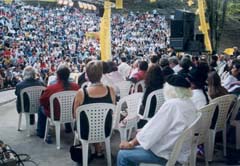 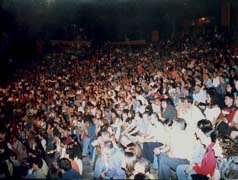 The XV International Festival of Medellín was held between June 24th and July 2nd of 2005, with the participation of 80 poets of four continents.

Supporters of the Festival