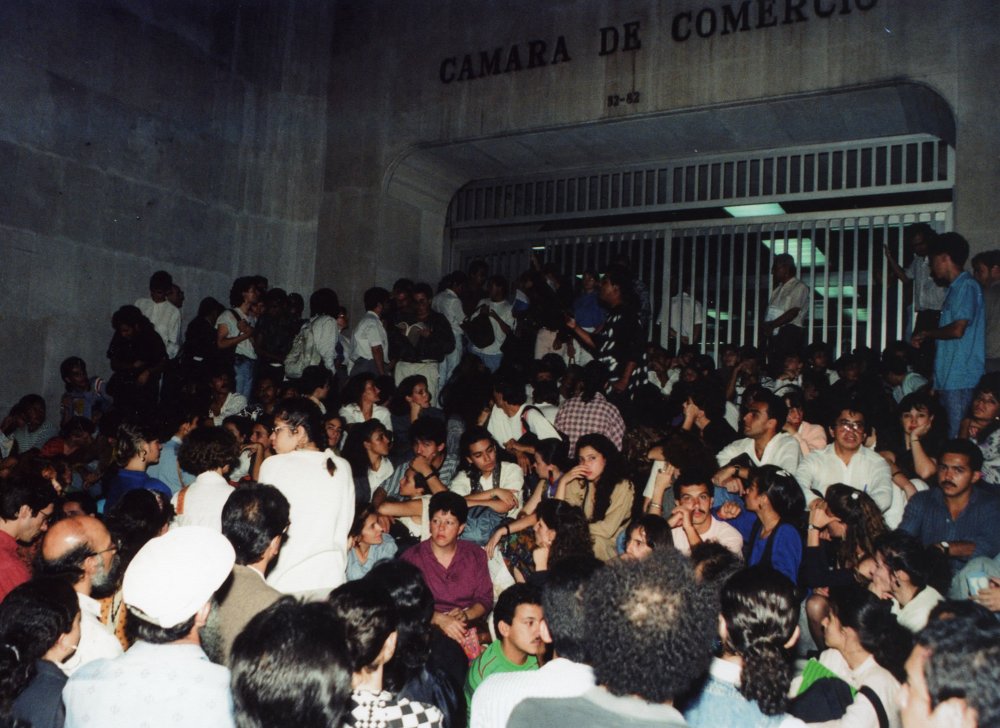 There are 16 poetry readings. The musical group Clave de Luna from the Taller de Artes de Medellín takes part. There are also lectures and movie and video cycles. The festival has the support of the Instituto Quirama.

It is something unprecedented in Colombia, in regard to the participation of international poets, as well as the considerable number of Colombian poets that are invited. But most surprising is the massive assistance of people, and their open attitude toward the signs that constitute the poetic image.

It is certainly a most surprising event given the immense audience (20,000 persons in the different venues). It is necessary to stage poetry readings in the streets, with loudspeakers, for the people who can not get in the venues, and who press against the doors. The readings take place in different packed houses at the same time.

Thus is initiated, according to the organizers plan, a new moment in which poetry unexpectedly grows in our lives, blocks the way of violence and waits for youth in its own body. It escapes from books and museums, from the aristocratic disdain of scholars, and meddles in the tortured sensitivity of the streets, taking by storm the heart and the senses, as one reads in the inaugural statement.

A territory is thus opened to reveal the dignity of poetry, its liberating action and the conscience of the other. A restoring oxygen to live is generated. A new style of resistance is made possible facing the conflicts that go against the spiritual and cultural life, whose expression suffers the blows of a widespread panic. This aspect is basic to understand the further and growing development of this event, whose characteristics establish it as a new form of assuming the proposals of possible worlds through the language of poetry.

The attitude of countering social as well as spiritual decline with the language of poetry, and that with this purpose a representative sector of the population takes part, is the cause of the International Poetry Festival not being lived as one more spectacle. In those days, the organizers declard in their announcement: By its very nature, poetry becomes an antidote to barbarity and a fundamental means of knowledge, a new vision and a new attitude that renews the spirit of a deeply shocked city, without which a new language and firm hope in the communion between men and women would not be possible.

They are truly splendid days, when something that had long ago been forgotten is made visible: our capacity of making symbols, our marvelous and magic condition of having a voice that becomes a unity in multiplicity, through the silence that allows us to listen and which is the very nature of our heart of hearts.

One of the participants, the Mexican poet Adolfo Castañón, said in an interview something that reveals one of the multiple ranges of the Festival:

In Latin America we are more concerned to talk than to hear, more concerned about writing than about reading, more concerned to appear on the stage than to be spectators. And a Festival like this is a sort of great challenge to pay attention. The value of this is to suspend for a moment the world and to allow us to hear it in its innocent, original, forms. And these are forms of attention. We not only live fast, we also live without knowing what we want. What we need is attention The important thing about this Festival, though it sounds paradoxical, is that it makes us pay attention to silence.

This aspect underlined by the poet is essential to understand the atmosphere generated in the readings, where the dimensions dug into by each poet make it a collective reality.

Experience has confirmed that the Festival is more than a literary gesture, that it has the dimension of a catarsis, that it achieves a liturgy in its deepest silence, so that the poetic voice can resurrect images. There one perceives that, facing violence, it is possible to build a protective membrane of imagination. The liberating effect of the II Festival allowed us to project it in a wider scope, with the aspiration of having a larger coverage in a city deeply affected by fear.