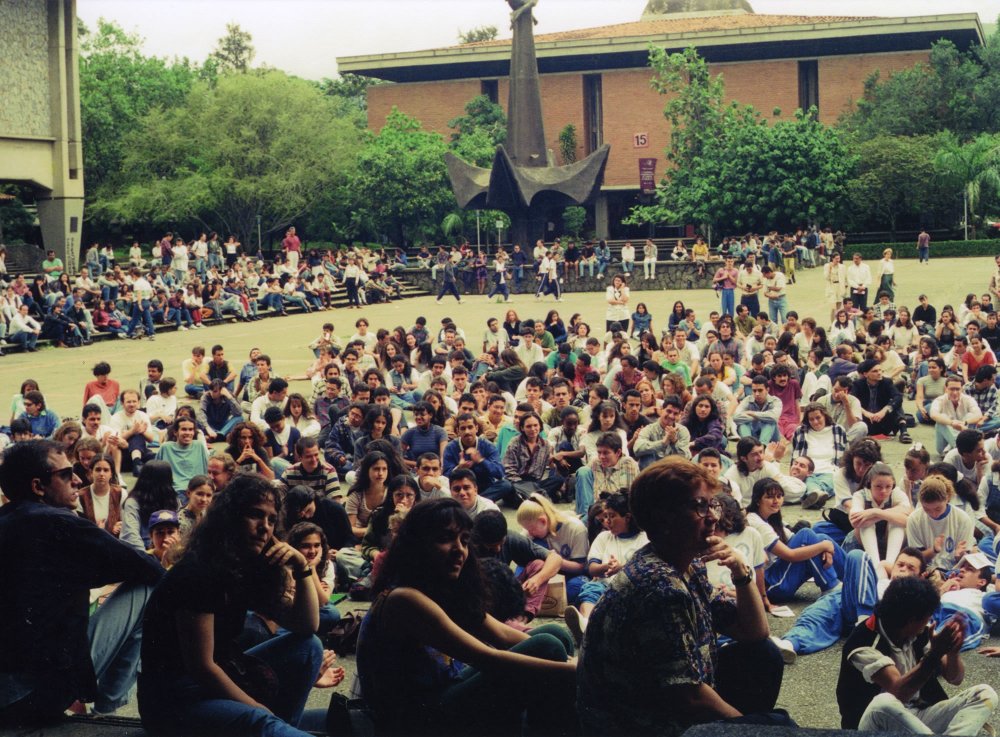 The V International Poetry Festival of Medellín is held between June 7 and 14, 1995. The opening and closing readings take place in the Cerro Nutibara, an open amphitheater that since then became an emblematic venue of the Festival. It is in fact the venue with which the Festival is more identified, due to the fact that 8000 persons fill the amphitheater each year in the opening and closing readings.

Almost 60,000 persons assist to 32 poetry readings, four lectures and three exhibitions, including the French exhibition of photographs, Poetry in the Paris Metro.

Gonzalo Rojas is the symbolic figure on this occasion. This Chilean poet is perhaps one of the most important poets on a world level and one of the most representative poets of the great Latin American tradition. His readings are essential to spread a message of vigor and dignity of life. As he said during his stay in Medellín: Poetry is a seed of freedom in our heads, a way of breathing, it is a new air, not only to inhale it but to live it. It is a child, a baby that is being born who writes, we are always being born. We are a shadow that is born. These lucid words reaffirm the renewing character of poetry for which the inhabitants of Medellín love it.

With the V International Poetry Festival of Medellín the dislocating energy of poetry becomes one of its permanent features: some poets participate with sound or non-alphabetic, gestural or performance poetry. This new experimental factor gives the Festival a new versatility and reminds us of primitive poetry, before writing.

The Austrian poet Ide Hintze is one of the invited poets. He introduces a new method of poetic expression, sound poetry, at the heart of the poetic vanguard. We thus widen the range of expression and manage to present in our milieu a novel context of references. It is the first time in the history of poetry in Colombia that this type of exploration is presented, thus showing a kind of polemic creation, in contrast with the conventional structure of lyric poetry.

With Ide Hintze are laid down the combined bases for the creation ot the Poetry School of Medellin, which is founded in June, 1996.