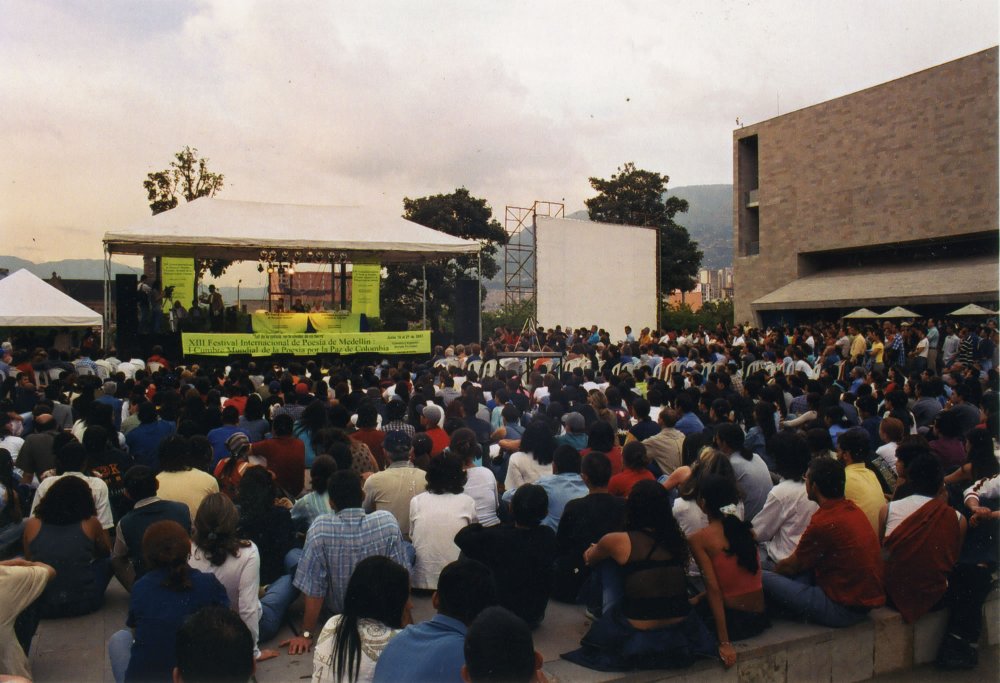 Apart from some press articles about the Festival in all these years, which have been no more than brief items or descriptions, we dont know about the existence of a serious study or an analysis of the Festival as a cultural phenomenon. Numberless are the reports by poets in the sense that what happens in Medellín with respect to poetry has no parallel in any other part of the world. On the other hand, works studying the phenomenon of violence are plentiful, so much so that this may be the only country where the profession of violentology exists. What explains that in a city classified as one of the most violent in the world, there are young people truly enthusiastic about art and in particular about poetry, in a way without parallel in the world?

With 77 poetry readings, the XIII International Poetry Festival of Medellín, was held between June 14 and 21, 2003, before packed houses. And one cannot assert, without being disrespectful to it, that the audience is ignorant or insensitive. Any one that has attended the readings of the Festival can confirm that we are talking about listeners who select and choose, who absorb poems deeply, who know that poetry is also about them. It would seem that the traditional rhetoric, the academia rhetoric, the political rhetoric, the rhetoric of the media, are not enoug to answer the questions or satisfy the needs of our young people (one must not forget that 80% of our listeners are young people aged 15 to 25). Poetry then appears here as an alternative, not to give definite answers to each one of the listeners, but for these to think about themselves and their environment with a new and renewing perspective.

The International Poetry Festival of Medellín has proved that if one conceives projects of an open and popular character for all, the impact, although its immediate effect is intangible because it acts on the spirit, is also positive and direct. And we are sure about something else: The International Poetry Festival is not a mass performance or aimed at an amorphous mass, or to ignore the darkest aspects of our reality. Poetry arises precisely from a conscience of darkness and from the necessity to throw light on reality from the perspective of beauty.

In its alternative program, the following events take place: The VII School of Poetry of Medellín; the V Display of Poetry Books and Reviews, of 2,300 titles of 34 Colombian and foreign publishers; several exhibitions; a filmfest of five poetic Soviet movies, and another one of thirteen anthological videos, realized by Prometeo, as visual Memories of the International Poetry Festival of Medellín.

The I World Poetry Summit for Peace in Colombia

It was is held between June 16 and 19, 2003. In the opening round table take part Messrs David Best (Ambassador in charge of the Switzerland); Guillermo Segura (Undersecretary of Culture of the Municipality of Medellin); Julián Malatesta (Colombian poet who was the moderator of the Summit); Gabriel Jaime Franco (Colombian poet who was the general coordinator of the Festival and the Summit); Francisco Sesto (poet and deputy Minister of Culture of the Bolivarian Republic of Venezuela), and Gonzalo Rojas (Chilean poet).

The themes dealt with are:

Invited to participate with papers or in the discussions were the participating poets in the event, the national government, the diplomatic corps accredited in Colombia, the most representative political Colombian forces, cultural institutions, national and foreign Human Rights agencies, social organizations of displaced persons, NGO, artists, writers, journalists, scholars and public figures whose opinions may be heard and taken into account, because of their influence on public opinión and among the direct actors of the conflict.