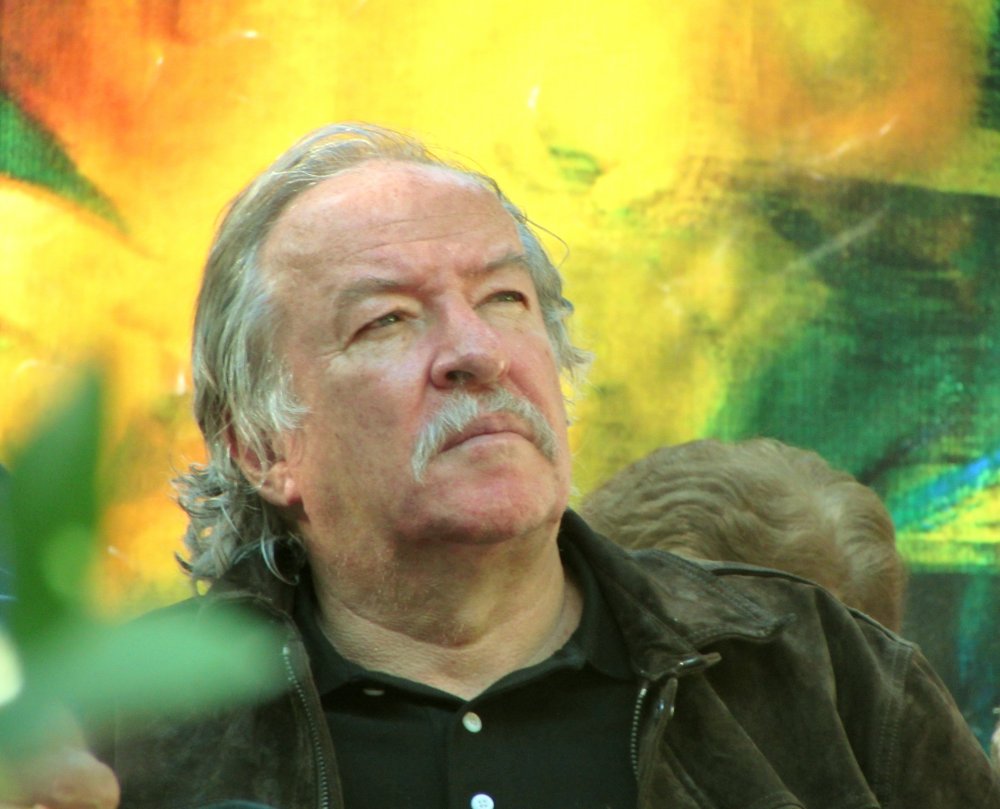 The unwary Margarita cried terrified when she dipped her foot in a gelatinous swamp that called her by her name.

She was howling for eight endless hours while she carried an invisible child.

It rained and the only one of her words you could understand was hell.

The wind and the spring, jurors, condemned in silence her executioners.

The trees jumped cursing and then fell back to their roots.

Pain twisted and turned eroding the edge of the waters.

Faraway: the age of earth.

The nerves were pinched by the stem of the poppies. And we waited between patience and impatience.

Maddened vegetables, as in nightmares we could not run.

After the supreme effort, we hardly kept life on the last step of human ridiculousness: a clockwork drunk.

The next day the battered body, the wings more vigorous than ever.

Lying like pieces of wood, the red bark wrinkled, some rotting buffaloes melting on the green prairie.

But also due to an inexplicable act of fate, lying like mushrooms in the grass we explore all millennia, we run away from prehistoric beasts, we fought all the wars, we are millions of beings stretching under the arch of eternity, while dragon and longing engage in combat in the clouds.

The sun calls and to hesitate is to die. Fly, fly beautiful swan of desire, everything can be achieved.

Walking on the white dew, take your shoes off: the age of a man is that of his look at the legendary wood.

I inhabit a zone of light rays and revelations. The oracle still speaks. I for my part do not listen to it. I do not follow its warnings.

I refused to be initiated. I never repeated aloud what I heard from the mouth of the torment. I fought against the angel. Because they chained the human spirit to the abyss, I looked down on religions. Because of the devastating massacres that without respite brought down the naked certainty in life, I put myself on guard against the nature of the states. Because I saw thousands fall, I knew that the pact of human indifference triumphed provisionally.

No doubt this is the time of the end, they proclaim, something as formidable as its emergence: the sinking of the continents.

I endure the pressure of the darkness forged by the human imagination in the rapture of an age already without a heaven. I already know I will be invisible. And even though a while ago a flash of lighting unloaded its anger of white roots, filling my log cabin with dense energies, I will unflinchingly turn a deaf ear to the oracle, for I will still love the men that suffer and the peoples that resist, I will hear the sweet voices of the stones and the trees that call us to the return, the secret language of the birds of the first day to which the states and the gods have been deaf for many centuries.

When we set out on the grueling march from the Apocalypse of the Shadow of Man, among the yells of the warriors, under a panic sky that mortally wounded all of our hopes, all our desires.

When we renounced ourselves to load our hope on the back of the brother, fleeing to the margins of delirium where you can no longer see the cities of hell.

When we knew that the doors of Spring would open and would not open only to us, that we would miss without fail the Shadow of Man, which we had loved since the beginning, when there was no death in the flowery prairies and the quagmires had not yet emerged from the human mind.

To return then, again, to undo in the heart the knot of our sweet wounded country, the nothingness of our lost dream of a life shared floating.

The sea of shadows of the man arriving swoops on the shadow of the man that was. The always sleepless, the astonished one howls. It is night upon the brook of light, that flows into the pupil of the Shadow of Man, sticking the shadow to the light.

"The stones shall cry."

Stone, talisman that chose its princes, bone of the presence and the beginning, I recognize your sacred spirit.

Our ancestors dug in the stone of the enchantments, went into the stone house of the spells, where the invisible life speaks.

A prehistoric clock of light, the shadow turns round the stone, which listens to the heartbeats of man.

The lyre of Anphion raised the floating stones of Thebes. Voices that surged from the stone go about the labyrinth of the ear.

Descended from the stone of the sun and drowned in shadows, the man no longer listens to the stone that sings.

V Lapidaries reveal secret transformations of the solids, new emanations from the urge of dawn, from the heart of the stone that the lightning inhabited one day, before a shoreless water emerged under the floating light, forging the interweaving of flowers and animals to make a mother country of the wood.

Delegates of the centuries arranged to meet around the ruined table, and at cards "with contrary sentiments" they play the destiny of the kingdoms of life.

The magician has made himself invisible. The lovers have a good star even though they are trapped. It is the Devil with the cards of the crown and death who has engendered anxiety in the game. Outside, the tower is still crumbling down. Not one civilization could have raised itself up without the obstinate vision of madness.

Time advances toward its end. The players look at each other, hostile. There is a mortal struggle for, at cards "with contrary sentiments" they play the destiny of the kingdoms of life.

And the emperor and death again take all the chips by the side of their owner.

However there are reserves left. Nature sings its deposits. The moon becomes bigger. The hanged man smiles, always invulnerable. The trial goes on transforming the solar province into a universe without restrictions. The constellations descend near the heads of the players.

Poetry takes out the events from the sleeve of its tunic. The world thus understands it. And it gets ready to purify itself for the demanding activity of resurrection.

There is no poem

My love without songs

You will always have reasons

You will draw out the sword
like an angel

And when you have unsheathed it
you already are a demon

The beast is the cage

When you grow up help us open all the cages. 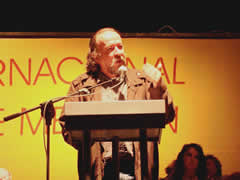 Fernando Rendón was born in Medellín, Antioquia (Colombia), in 1951. He gained his first experiences writing poetry and having it published in journals as a teenager. His debut work “Contrahistoria” (1986), a visionary idea of the future in complete opposition to the realities of apocalyptic excess in his country, was published in the 1980s. He has published another poetry books: “Bajo otros soles” (1989), “Canción en los Campos de Marte” (1992) “Los motivos del salmón” (1998), and “La cuestión radiante” (Venezuela, 2006; Egipto, 2007; Costa Rica, Francia (2008).

He has founded the poetry magazine “Prometeo”. The Latin American poetry journal has issued 83 numbers to date. The creative journal sparked off the establishment of many poetry initiatives in the cultural metropolis of northwest Colombia and in the country as a whole. This helped provide an ethical and aesthetic counterweight to the terror of the civil war, which has now been raging for 40 years.

In 1991 he and a team of three poets founded the The International Poetry Festival of Medellin (Alternative Nobel Prize in 2006), which takes place every June. It regularly attracts crowds of over 160,000 and has become the biggest event of its kind in the world. So far around 850 writers from 143 countries all five continents have participated. The large number of visitors is, however, not the main reason why the festival in Medellin is such a remarkable event. It has become such an extraordinary phenomenon due to the frankness, intensity, enthusiasm and directness of the mainly young audience from all sectors of society, who come together in a true celebration of poetry at the free event. Fernando Rendón believes that the persistent and overwhelming fascination for poetry can be explained by the perilous times the people are enduring, as well as their hopes that they will see the end of them. Pain sensitizes us. Poetry enables us to cope with the crisis and to identify with our city despite the hostilities and the war.

People welcome poetry because it is a way of living life again. It also reminds us of the past, when poets spoke directly to a community rather than through the print media. Poetry is a real test: the search for the unknown and the resurrection of humankind. It also provides certainty that life has not been completely lost or destroyed. That is why the people who live in and around Medellin heed the call of poetry. In 1993 the first of the international poetry series “Colección Prometeo” appeared, now numbering 13 volumes. During the poetry festival of 1996 the “Poetry School of Medellin” was founded at the Universidad de Antioquia. The first Latin American school cooperated in this with the “Schule für Dichtung” in Vienna.

He is the director of “Time of Poetry -In Spanish-” (Tiempo de Poesía), serie of 16 poetry documentaries. They were premiered at the XIII International Poetry Festival of Medellin and were shown on Venezuelan television in 2004.

His poetry has been translated into several different languages, including French, Italian, Croatian, Hungarian and Portuguese. It sometimes alludes to myths, sometimes to centers of art. He questions the fate of humankind in times of sudden, earth-shattering catastrophes; he restlessly and rebelliously seeks the original sources of lost dignity, intellectual diversion and creative freedom. His poetic language is sonorous, quasi Dionysian, vivid and dynamic. The poem “The Storm” considers the natural cathartic power of poetry in itself. “The rain/washes the blood away,/washes the memory clean of cruelty”.