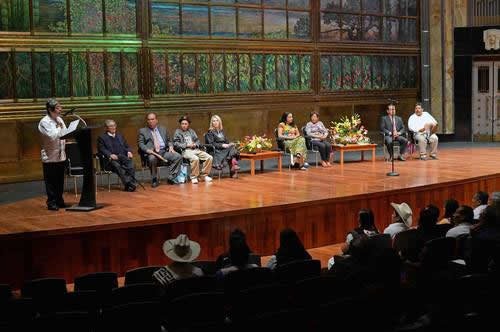 Poetry is, for the indigenous cultures of the world, the word that enlightens and inspires towards the encounter with beauty, towards the understanding between human beings, towards the harmony with Mother Earth.

Facing the failure of the rationalist project, facing the absence of the gods who have been exiled by line productions and alienation, facing the great emptiness that makes its way through human condition and earth, the human being seeks shelter in the place where the sacred is still possible: this place is poetry. Poetry is the strength that is able to bring us together, in times of extremism and deceit, branded by simulation, the fetichism for merchandise, the permanent threats to life and the devastation of the Earth.

In the context of the First World Meeting of Indigenous Peoples´ Poetry: Colorful Voices for Mother Earth, the representatives of the indigenous cultures of Europe, Asia, Oceania, Africa and America, from the Sacred Temple in Mexico City, have knit from our native languages, the Flowery Word, around the huge pain originated by intolerance and injustice. In the way of our great hope of a better world, we manifest:

We summon the intelligence and heart of the Nordic governments to respect the sacrality of the lands that belong to the indigenous Sami people. We sing a plural chant of solidarity with the Syrian refugees in Europe; a claim for the end of war in Syria; a prayer for the understanding and definitive agreement of peace in Colombia; a chant of respect for Mother Earth to stop the project Dakota Acces in Standing Rock which destroys the Sioux reservation and sacred places in Dakota; raise a chorus of “Stop now!” Stop the extractions in fragile ecosystems in Central and South America, stop the violation if the human rights in Mexico.

The bearers of the flowery word from all the cultures in the world, have initiated an unstoppable quest of strengthening the human rights to achieve the fraternity of mankind beyond the cultural, religious, and political differences between all nations on planet Earth.

We invite the poets, artists and the rest of the community, to convey in a common will to transform the horrors and wounds, to build a world where at last peace will reign and everyone, everywhere, can share the joy of existence.