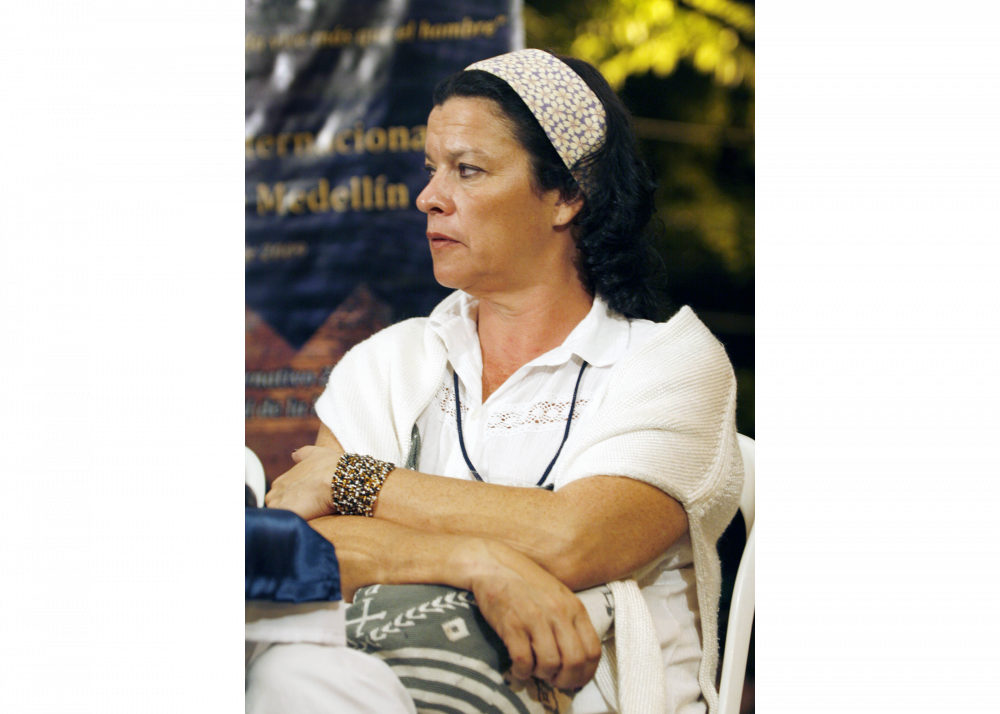 My father was a novelist and jazz critic; my mother, a publicist and Journalist. In such a way that my childhood landscape was always intervened with the image of the typewriter, the sound of the keyboard, the noise of the line space lever, and those personal and abrupt silences that I began to associate very soon with doubt, and made me feel the astonishment at the blank page, the printed word, the book.  For what it was not by chance, but fortunate, to have received the first typewriter at the age of ten to start an adventure that would mean to recognize me in other rhythms, new ways of breathing, and encouragements that led me to unthinkable reasons to play with images and words. So I belong to the generation of writers and poets that although we felt yesterday and we feel today the need to continue extending our hand to dip the pen into the ink or scribble on a piece of paper, we also assumed with greater or lesser dexterity the ingenuity that it was the mechanical writing machine, that at the beginning of 1990 we were already replacing by the computers which proposed us new ways of navigating the world.

If the notion of the nearness or remoteness can already be mediated by new roads and virtual routes that lead us to other representations of the real.  If the term chat was accepted as a neologism, and we don’t always associate it with the traditional, physical, friendly and light conversations, or with the image of the yellow-chested bird known as the only one that in spring it delivers its whistle jets, and thrills and laughs and gurgles as a splendid jazz improvisation. If a well-organized classroom receives us with an optical pencil that changes into a hand, a finger, a pencil when it moves over some graphics or highlighted words. If we prefer to make use of a virtual plane rather than request the gesture of human benevolence on having felt lost in a strange city. So, if and only if, generally speaking, we could say that we act like who we are, some ordinary inhabitants of the territory of the Age of Media.

However, although it would be easy for us to join that global choir that expresses today satisfaction at being included in the so-called Fourth Revolution, which some others name more carefully as the Age of the Computer Science or the Media because they resist to consider it as a revolution, we cannot do it because questions, hesitant after all, have been opened to stay. The question mark knows that something is hiding behind words.

Not to see the practical values when we communicate to one another regardless of the geographical distances, the provision of texts, libraries, virtual galleries, and the audiovisual and musical universe provided by network it would be clumsy. But the matter goes much further for those who have their sights and their imagination on a global phenomenon that has impacted in a negative and vertiginous manner the relationship between mankind and society and the environment. So, let me borrow some ideas of one of the major scholars that addresses the subject, Joseph Esquirol, who points out in his book The respect or the attentive look that although the technique is as old as man, what has been lost is the reference of Nature as the essence of life. Old certainties and beliefs, habits and customs had conceived Nature as a paradigm. This is not the case today, he says with emphasis.  Nature has been replaced by technology, by the technical universe that has brought other fears and fascinations as well as a homogenous social behavior that comes from an unmentionable power.

But we have not yet reached, with innumerable fortunes, the Apocalypses, and we recover our breath with images as this of the French art historian and philosopher, Georges Didi-Huberman, collecting pieces of bark from the birches while visiting the Auschwitz concentration camp, to take them home where, as he tells us, he saw each one of them as letters, floods, roads, time, meat. As it was expressed so beautifully by a young journalist, the crust was used by Didi-Huberman as a springboard to the meditations that he transformed into a book that even though it was based on history and memory, it should be seen as a poetic act that transcended erudition.

Just a few days ago, passing by one of the tunnels of the Beijing subway, life gave me the beautiful image of a young mother who was pointing with her finger each of the words printed on a huge poster to be read out loud by her child.  They were reading together.  And as those teachers that cannot escape feelings of pride, she encouraged him to complete the sentences with her glances and smiles. Then, by the effect of a miracle, through some gestures rather than words I was part of the scene that is imprinted in my memory. My fingers almost touched the mother's fingers, so mines replaced hers and the signs revived with the voice of the child that read the whole text for me. The territory and the dialogue of our bodies were imposed on new techniques.

Our relationship with imagination, therefore, will depend not only on the permanence and insistence of the memory upon the perceptions amassed in the dialogue between human and cultural landscapes that cause happiness or distress, but also on the echoing voices of the future that we are obliged to anticipate. The Australian writer and media scholar, McKenzie Wark, winked in collusion with Bradbury, clarifies the concept: the prediction emitted by the large technological companies, who profess the dominion of our future, is that the coming civilization will only change as far as the substitution of drivers is concerned -cabbies and truckers who will lose their jobs- by robots... mutation because machines will crash into us on the roads.

As witnesses or victims of banalization, we are exposed to the manipulation of images.  We know it even without a complete awareness of the disaster. About this issue they deal with vigor the specialists who alert us all the time.  But banality, says Didi-Huberman, is not in the technique but in the gaze. In fact, he celebrates the dialogue between the world of visual arts and cinema like a prolongation of rebellions. The question then lies in how to see, how to maintain what already exists behind the physical planes and the created images.

The Contemporary culture and cyber culture somehow arrive to our thinking schemes. The mental representations of the external reality (an open and alive book, or closed  and dusty;  a placid body under a tree or another agonizing one on the asphalt); and of the abstract (hatred or love, good or bad taste) that can only be evoked by the mind of each individual, they seem to be intervened by the precepts of the world that dehumanizes us for the benefit of the neoliberal global economy, providing us a cooperative gaze, if it does not steal from us - in its defect- its transparency and clarity in order we can ignore the physical planes of our most genuine victories and joys, wars and its  gestures of pain, the shout and the silence of our peoples.

In every line I write, I always deal with greater or lesser fortune, to invoke the elusive spirits of poetry and leave my word, my testimony on devotion for its virtues of divination, and for its permanent victory against the deaf powers of death, said Garcia Márquez in his Nobel acceptance speech.  Many years before, in 1928, at the Students´ Residence in Madrid (the place loved and shared with Buñuel and Dalí), Federico García Lorca put it another way: the mission of the poet is to animate, in its exact sense: to give soul.  Imagination is an aptitude for discovery that brings with it our little light into the living gloom where all the infinite possibilities, shapes and numbers exist. Poetry sets and gives a clear life to those fragments of visible reality where man moves.

In such a way, artists, poets, and writers touched with fortune by poetry must continue the fight, the revolution of their gaze, maintaining the combative spirit that has always characterized them.  But why poets in times of shortage? Asked Holderlin, convoking us to find the answer in the background of his tentative question.

Latin American poets struggle to consolidate or rediscover an aesthetic language aligned with their poetic-historical time, recreating a plural world from a multiplicity of styles and structures while we reconstruct our common history. The meetings and the private and public discussions take place around the posture of actual poetry as the fragile or strong heiress it became from the literary proposals of Modernity, and its eye that donated us the critical Reason. From Romanticism and its revolutionary concept of imagination that managed not only to kill God but also taught us new ways to love and to think, to die, and to return to our own myths. From the avant-gardes which modified the structures and typographical dispositions of the verses, giving a new virtual meaning to the page, appearing during three periods of time, as a fortune or misfortune for poetry.

We celebrate what is happening in much of Latin-American poetry as a kind of concern for that need that becomes a genuine exercise to adjust itself to the future in a time in which globalization annihilates our looks, and exposes our peoples to all kinds of violence and wars.  Therefore, as children of our land, of our indigenous, African and European ancestors, and as the critical and revolutionary young people of the sixties and seventies that still we are, our hands are ready to take the branches of the almond trees and willows that will tell us about what happened since then.

So, we will continue walking towards communities desolated by violence and death to embrace with them in the reality that has been imposed on us to give a little light into the living gloom as García Lorca told us. We will navigate the waters close to life to fight the traps that take place in the media territory.