A statement on nuclear weapons 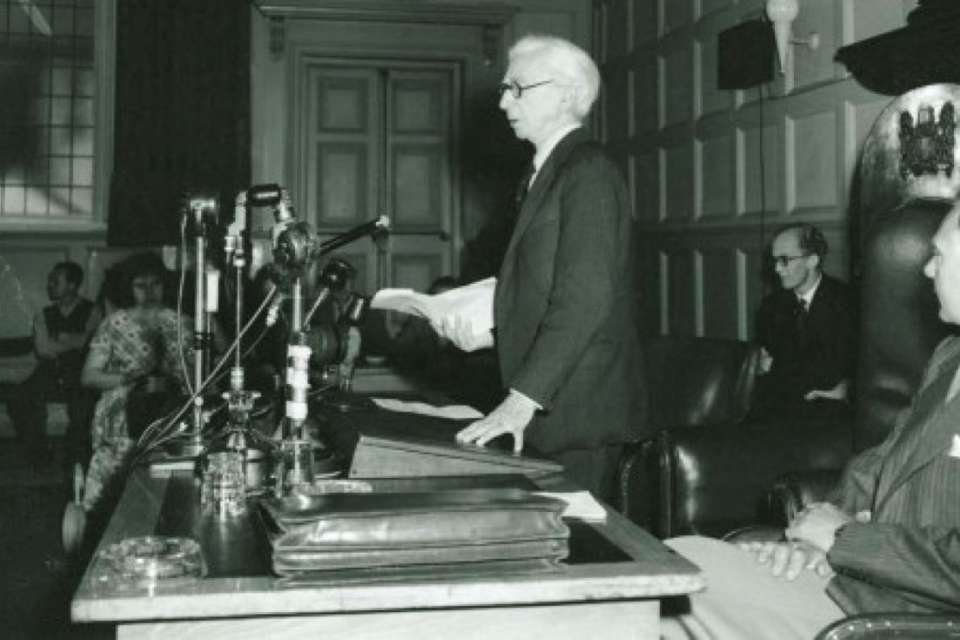 The accompanying statement, which has been signed by some of the most eminent scientific authorities in different parts of the world, deals with the perils of a nuclear war. It makes it clear that neither side can hope for victory in such a war, and that there is a very real danger of the extermination of the human race by dust and rain from radio-active clouds. It suggests that neither the public nor the Governments of the world are adequately aware of the danger. It points out that an agreed prohibition of nuclear weapons, while it might be useful in lessening tension, would not afford a solution, since such weapons would certainly be manufactured and used in a great war in spite of previous agreements to the contrary. The only hope for mankind is the avoidance of war. To call for a way of thinking which shall make such avoidance possible is the purpose of this statement.

The first move came as collaboration between Einstein and myself. Einstein’s signature was given in the last week of his life. Since his death I have approached men of scientific competence both in the East and in the West, for political disagreements should not influence men of science in estimating what is probable, but some of those approached have not yet replied. I am bringing the warning pronounced by the signatories to the notice of all the powerful Governments of the world in the earnest hope that they may agree to allow their citizens to survive.

Letter to Heads of State

I enclose a statement, signed by some of the most eminent scientific authorities on nuclear warfare, pointing out the danger of utter and irretrievable disaster which would be involved in such warfare, and the consequent necessity of finding some way other than war by which international disputes can be settled. It is my earnest hope that you will give public expression to your opinion as to the problem dealt with in this statement, which is the most serious that has ever confronted the human race.

A statement on nuclear weapons

In the tragic situation which confronts humanity, we feel that scientists should assemble in conference to appraise the perils that have arisen as a result of the development of weapons of mass destruction, and to discuss a resolution in the spirit of the appended draft.

We are speaking on this occasion, not as members of this or that nation, continent, or creed, but as human beings, members of the species Man, whose continued existence is in doubt. The world is full of conflicts; and, overshadowing all minor conflicts, the titanic struggle between Communism and anti-Communism.

Almost everybody who is politically conscious has strong feelings about one or more of these issues; but we want you, if you can, to set aside such feelings and consider yourselves only as members of a biological species which has had a remarkable history, and whose disappearance none of us can desire.

We shall try to say no single word which should appeal to one group rather than to another. All, equally, are in peril, and, if the peril is understood, there is hope that they may collectively avert it.

The general public, and even many men in positions of authority, have not realized what would be involved in a war with nuclear bombs. The general public still thinks in terms of the obliteration of cities. It is understood that the new bombs are more powerful than the old, and that, while one A-bomb could obliterate Hiroshima, one H-bomb could obliterate the largest cities, such as London, New York, and Moscow.

No doubt in an H-bomb war great cities would be obliterated. But this is one of the minor disasters that would have to be faced. If everybody in London, New York, and Moscow were exterminated, the world might, in the course of a few centuries, recover from the blow. But we now know, especially since the Bikini test, that nuclear bombs can gradually spread destruction over a very much wider area than had been supposed.

It is stated on very good authority that a bomb can now be manufactured which will be 2,500 times as powerful as that which destroyed Hiroshima. Such a bomb, if exploded near the ground or under water, sends radio-active particles into the upper air. They sink gradually and reach the surface of the earth in the form of a deadly dust or rain. It was this dust which infected the Japanese fishermen and their catch of fish. No one knows how widely such lethal radio-active particles might be diffused, but the best authorities are unanimous in saying that a war with H-bombs might possibly put an end to the human race. It is feared that if many H-bombs are used there will be universal death, sudden only for a minority, but for the majority a slow torture of disease and disintegration.

Many warnings have been uttered by eminent men of science and by authorities in military strategy. None of them will say that the worst results are certain. What they do say is that these results are possible, and no one can be sure that they will not be realized. We have not yet found that the views of experts on this question depend in any degree upon their politics or prejudices. They depend only, so far as our researches have revealed, upon the extent of the particular expert's knowledge. We have found that the men who know most are the most gloomy.

Here, then, is the problem which we present to you, stark and dreadful and inescapable: Shall we put an end to the human race; or shall mankind renounce war? People will not face this alternative because it is so difficult to abolish war.

The abolition of war will demand distasteful limitations of national sovereignty. But what perhaps impedes understanding of the situation more than anything else is that the term "mankind" feels vague and abstract. People scarcely realize in imagination that the danger is to themselves and their children and their grandchildren, and not only to a dimly apprehended humanity. They can scarcely bring themselves to grasp that they, individually, and those whom they love are in imminent danger of perishing agonizingly. And so they hope that perhaps war may be allowed to continue provided modern weapons are prohibited.

This hope is illusory. Whatever agreements not to use H-bombs had been reached in time of peace, they would no longer be considered binding in time of war, and both sides would set to work to manufacture H-bombs as soon as war broke out, for, if one side manufactured the bombs and the other did not, the side that manufactured them would inevitably be victorious.

Although an agreement to renounce nuclear weapons as part of a general reduction of armaments would not afford an ultimate solution, it would serve certain important purposes. First, any agreement between East and West is to the good in so far as it tends to diminish tension. Second, the abolition of thermo-nuclear weapons, if each side believed that the other had carried it out sincerely, would lessen the fear of a sudden attack in the style of Pearl Harbour, which at present keeps both sides in a state of nervous apprehension. We should, therefore, welcome such an agreement though only as a first step.

Most of us are not neutral in feeling, but, as human beings, we have to remember that, if the issues between East and West are to be decided in any manner that can give any possible satisfaction to anybody, whether Communist or anti-Communist, whether Asian or European or American, whether White or Black, then these issues must not be decided by war. We should wish this to be understood, both in the East and in the West.

There lies before us, if we choose, continual progress in happiness, knowledge, and wisdom. Shall we, instead, choose death, because we cannot forget our quarrels? We appeal as human beings to human beings: Remember your humanity, and forget the rest. If you can do so, the way lies open to a new Paradise; if you cannot, there lies before you the risk of universal death.

We invite this Congress, and through it the scientists of the world and the general public, to subscribe to the following resolution:

«In view of the fact that in any future world war nuclear weapons will certainly be employed, and that such weapons threaten the continued existence of mankind, we urge the governments of the world to realize, and to acknowledge publicly, that their purpose cannot be furthered by a world war, and we urge them, consequently, to find peaceful means for the settlement of all matters of dispute between them.»