Poetry in the era of globalization

Poetry in the era of globalization 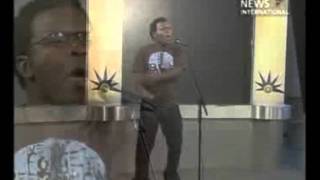 Poetry has without doubt, played a major role in the fight against evil systems in different countries around the world; this includes the fight against apartheid system in South Africa. As the result, many political leaders used poetry written by known and ghost poets to change the world. Great poets such as Angola’s AgostinoNeto became presidents of their countries. The essence of poetry has from time memorial been a hook to fish hearts of the people, meaning poetry is in itself power. But power not constructively used is as good as nothing.

In this era whereby the entire universe is compressed into a computer, poets from different parts of the world can easily form solidarity through the use of internet and start utilizing poetic power to conquer global burning issues. In the spirit of accepting that one eye can see yet not as clear as two eyes, poets from different parts of the world can share views from different dimensions in order to gain a deeper understanding of challenges and tangible methods of resolving them. Our collective voice could move mountains like a child peeling off banana’s leaves. We can portray Somalia’s starvation in bright colours to such an extent that blind nations could be dazzled and start stretching their helping hands. Together, we can televise oppression in Israel until those who are responsible could get overwhelmed by the weight of the collective voice and get obliged to demolish their system. Taking an instance of South African apartheid system, it was abolished due to a collective voice from within the country and voices from exile. As much as any country will request other countries to send their troops of soldiers during war, poets in any country need poetry from outside their countries to back them up in during their bloodless war.

Knowledge should be distributed amongst poets across the globe. For instance, it is not every country that has a Poet Laureate. Poets from countries that have Poet Laureates need to share with those without on the importance and procedure of having a Poet Laureate. This will encourage poetry development in those countries. When poetry grows in every country, it will strengthen the global poetic voice, which in return will increase the number of poetry gatherings, movements, publications, impact of the international poetic voice and of course quality poetry throughout the world.

Poetry should become an international reliable google search in documenting what is happening in every country, every city, every town and every village. This cannot only be achieved when poets write without fear or favour. Formation of the likes of World Poetry Movement should catalyse accessibility to these on-your-face voices, which will be packaged into a single and effective voice called world poetry. All we need to do is to sharpen each other’s brains as poets through talks and debate, then what we write could reflect the world from different outlooks. Power is poetry that aims to chisel off sharp edges within the society so that the world could better a better place. Poets unite!