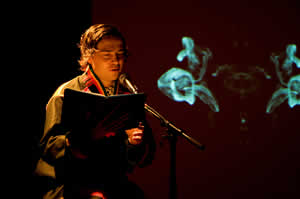 By Sigbjørn Skåden
Written to Prometeo

The concern with the word and the sentence, the ambition to form the perfect phrase, the inclination to invent and reinvent language; these are all descriptions that suit the poet, and these are all matters that become increasingly important in a globalized world where a myriad of influences constantly cannonades the language and culture from all sides. The poet tugs and tears at the language, refusing it to lose self-awareness.

I have always thought of globalization as my friend. For a stateless people such as the Saami, a minority population of four different countries, globalization has been liberating. The Saami people and Saami culture and arts have always been suspicious of external influences, we have always resisted change. The reason for this scepticism was the minority status of the Saami and the hundreds of years’ long smothering pressure from the majority cultures that drew borders through Saami land and divided it between them. For generations this was the only influence the Saamis knew, an influence that threatened to wipe out our culture. As a result the Saamis became a nation of purists. All that was un-Saami had to be resisted.

This was to a great degree relieved by globalization. The smothering pressure from one single majority changed into a steady bombardment from all sides. In a global world everybody is a minority. The Saami art scene has realised this. It resists influence less than before.

To maintain Saami particulars yet make use of the global scope. This is what I have wanted to do with literature. The language I write in is one of the most inaccessible languages in the World. Therefore the language must access the World. We who use the language have faith in it. We tug and tear in it, we invent and reinvent it, we never let it rest.