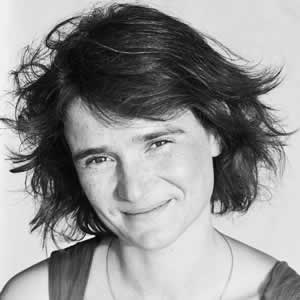 By Dostena Lavergne
Written to Prometeo

May poetry walk as if she knew nothing
of walking and even less of “as if”
then she couldn’t complain
of the wounded soles
of the patent leather shoes
she wouldn’t be able to fly
to fall
gathering speed and clenching the iron in her teeth
the math of childhood, they say
they’d seen her on the street humming to herself
and wearing dark glasses
and then it occurs to you that the metaphor is a dress
of tulle, hang it this way,
that way, snap
wrap a red thread around your finger
but she doesn’t feel like talking to strangers
she looks through you and in her eyes
a sad city hatches
with bridges stretching ellipses.

At first writing broke out like sap in the channels along the scar of the bark, then I wrote
as I was making the bed in a lonely room, but at thirty, I can’t breathe anymore
like I used to, smiling or crying in front of the mirror, and I feel like hitting the highway,
like taking the pen by the horns to write…
about the nations and their roots blossoming, all in blood, to take down words
that are about to go extinct: cerulean, sorcerer…
to write about the exodus of the soul from Auschwitz, from Belgrade and Kana, relearning
how to eat, dance, make love… and because I’m not good enough yet,
and because I’m still a bad archer, I don’t dare believe, lest I betray Him.

They used to tell me poetry is not (an easy job) (isn’t child’s play)
but they didn’t tell me the whole story
and so I enlisted
in the army without suspecting
they had drafted me for the third world war.