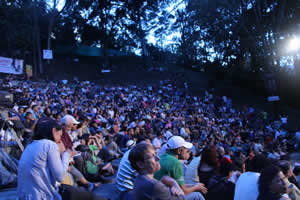 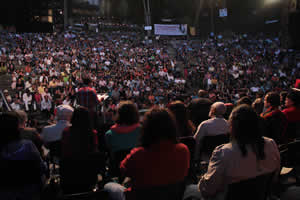 Held from 23 June to 30 June 2012 at 150 venues in Medellin and its districts, in six municipalities of the metropolitan area, 10 Antioquean municipalities and four Colombian cities, the XXII International Poetry Festival, faithful to its origins, consolidated its continuity as a messenger in collective spaces, a generator of dignity that illuminates the resistance, from poetry, song and celebration, up against the adversities of our fratricidal history.

With the participation of 70 poets from 45 countries on five continents, there were 150 events of which 128 were poetry readings and 22 were educational activities.

The festival paid homage to the spirit of indigenous peoples, claiming their remembrance and culture through poetic expression. This gesture was a message to the global population in the sense that now more than ever, the words and thoughts of Indigenous people are relevant and wise, reaffirming their love for the living, and the sanctity of life and its beings.

The Festival has grown stronger because, thanks to its persistence and perseverance, it has become a spiritual and cultural core of a population that has given meaning to its existence, because its background is not just to be simple amusement to satisfy the immediate anxiety of a population through entertainment. What drives this poetic action is encrypted in its historical genesis: poetry and art as factors of social transformation, as elements that are essential to protect the dignity of a people who have been threatened by violence, exclusion and social injustice.

This new experience confirmed that progress is being made in the right direction, following the path of sensitivity, the human heart and its social projection through an ancient ritual celebrating life, using poetry as a cohesive force among human beings, as light that purifies the spirit and weaves individual intelligences within the purpose of transforming the city into a real space for ​​growth and the expansion of consciousness.

The dynamics of the 22nd International Poetry Festival of Medellin made it possible to visualize a field of action that will have to be strengthened to exert direct and permanent actions in the neighborhoods of the city, conducting educational activities with key issues in the light of poetic expression.

With this version of the Festival, the cultural context of Medellin was consolidated as a plural and open field to experience the full exercise of freedom of expression and love, joined by the development and qualification of both social and artistic sensibility as well as peaceful coexistence, all reformers of socio-cultural fabric.

This time, after twenty years of organizing great events of poetry for life, we observed a strong willingness with spiritual fervor expanding so authentically, in a large audience of people who attended to realize the Promethean mission of sharing the sacred fire of poetry. All this has been possible because of the solidarity in their lucid and loving company, because of the fraternity among them, expressed as a social group, and towards the poets, who traveled from all corners of the globe, to meet this call.

The International Poetry Festival of Medellin has become the largest Poetry Festival worldwide, feature confirmed by the visiting poets and directors of other festival. This is another reason to continue promoting the gathering of Poetry Festivals, poetry organizations and poets from five continents, in the World Poetry Movement (WPM). 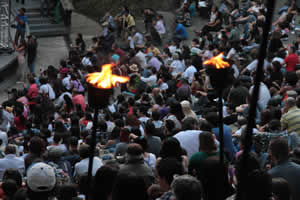 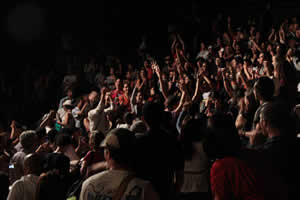 The structure that gave support to the 22nd International Poetry Festival of Medellín consists of five lines of action:

1. Poetry readings: These are the main and essential acts. They were organized as recitals -with a large diversity in expression-, in which poets with important backgrounds, from the five continents, participated. With two categories: Group Readings with three to five poets and Individual Readings with dialogue or discussion with the audience.

The most symbolic acts were the opening and closing, due to the large turnout, the amazing exercise of the art of listening, imbued with a thrill similar to that of an epiphany, achieved by generating a beautiful polyphony of voices from all over the world, synchronized to the ear of a wide attending audience.

The poetry readings have refined many aspects of the audience and we highlight the good level, regarding their knowledge of poetry performed nowadays. This again put the partaking population in a privileged position regarding audiences from other cities.

These acts allowed the cultural and human enrichment of the urban environments where they were held. These interventions, infused with warmth and great sensitivity, sank deep into the spirit of their audience and participants.

2. Educational events. These are poetic actions that have educational purposes, which had poetic creation as a core theme. Developed in the 16th School of Poetry of Medellín, which consisted of 24 activities including courses, workshops, and conferences.

The writing workshops produced significant results, embodied in texts produced by participants. Guest poets, planned, designed and implemented activities to be shared with those interested in exploring the issues in question. These activities were directed to students, teachers, poets, children, cultural managers, directors of poetry creation workshops, people who have not had access to alternative forms of education and culture. The target population for the activities of the School is part of the heterogeneous population of the Festival. Usually it is a social group that survives in circumstances of economic liquidity, which implies that Prometeo must acquire resources so that assistance is subsidized.

3. Publishing line - information and communications: This line was prepared and running ten months before the Festival. It includes the publication of the 22nd Festival memoirs, issues 91 and 92 of the Prometeo journal, the creation and distribution of promotional material: 150,000 programs (booklets), 5,000 posters, videos for television, urban advertising and promotional material for radio stations.

Also, there is ongoing work being done on the website, that gathers contents on thought and poetry, where there are essays and conceptions of participating poets, who submit their writings in which they share their thoughts on poetry and the globalization of poetic actions.

There is presence on social networks such as Facebook, Twitter, YouTube and LinkedIn. This line of action was essential, because it is a vehicle that has had a massive response.

4. Team of Readers, Translators, Interpreters and Logistics. Our team of readers is a highly skilled group, made up mostly by people with experience in the performing arts and who contribute, with their professionalism, in a proper understanding of the texts that were translated from the poets’ original language (other than Spanish). This year their intervention facilitated an ideal connection between poets and the public. The group of interpreters also showed an amazing level of expertise, which was apparent as the poets who did not speak Spanish were actively incorporated into the social context of the Festival, enabling integration and fraternity that effective communication promotes. Also the logistics organization and staff worked well for all events. 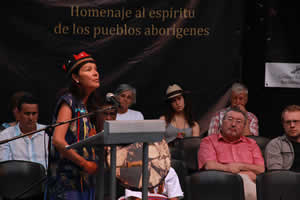 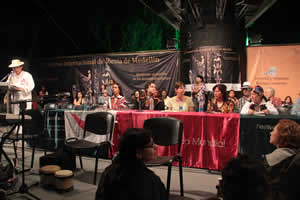 5. Tribute to the spirit of Indigenous people. A great confluence was achieved at the gathering for the spiritual and cultural cohesion of Indigenous peoples, represented by 14 poets from 14 ancient cultures. They spoke of the need for joint action in response to the results that emerged in the gathering between Indigenous poets, experienced world poets of important backgrounds and people invited to participate with their audience. In this 4-day gathering of Indigenous poets the following issues were discussed: Defense of the Land, Identity, Language and Culture, Globalization of poetry, debates and conclusions.

This experience reflected the maturity of Indigenous people represented by these poets. The development of this gathering was magnificent and splendid because these topics were spoken of from the view of ancestral thought. It was beautifully moderated by the poet of the Wuayuu nation (Colombia), Vito Apushana, who, at the closing ceremony of the Festival, shared the following commitments in a poetic, formative and lucid manner:

"The defense of the land is the foremost duty of every human being, of every indigenous community, of every destiny of flesh, bone and breath. The commitment is given ... we want to live with the land and die with it. It is the relation: Seed Coat and Flower.

The World Poetry Movement ventures into the quake of the defense of the Earth. At each World Gathering of Poets there must be a ceremonial act of protection over natural heritage in the territory of the venue that acts as host. 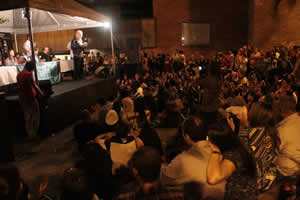 From its inception, the International Poetry Festival of Medellin has found the essential contribution made by poets that represent ethnic minorities to be of vital importance. This way, the festival in 2012 was defined as an event to experience the resurgence of myth as the essence of poetry. It was possible to connect the audience with the ancestral voice.

The above achievements allowed progress in the consolidation of the objectives of the Festival, which are:

Objective: To contribute to the improvement of congregation and gathering, that build social fabric, through the unifying and inclusive capacity of poetry and art.

Main objective: To reduce levels of social inequality in a heterogeneous audience, convened in 150 public settings distributed all through the city, its metropolitan area, municipalities of Antioquia and cities in Colombia.

The perception that is revealed is that the actions of the Festival allow their organizational, educational and cultural practices to be seen as a model for the development of consciousness, which aims to strengthen the spirit and offer a humanistic dimension and a true practice of peace, in a social environment in need of activities that educate and nourish consciousness, that may project its light to create a society that is more inclusive and capable of life, in its bright and uplifting dimension.