In Search of Poem’s Future Role and Image. By Hrant Alexanyan /Armenia/ 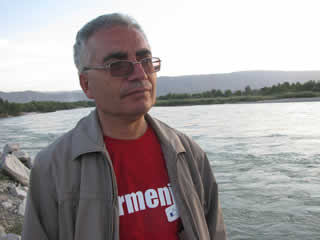 By Hrant Alexanyan
Translated from Armenian by Christina KOCHARIAN

In its full sense the poem’s mission has remained the same for all times, just on its further way it becomes more complicated and hard workable. The poetry is going to face a series of severe competitions with other branches of art, it has to maintain not only its leading position among the other literary genres but also to be visible and demanded in the circle of other types of art and media, especially of internet. I’m sure that the tomorrow’s poetry with its principal manifestations, literary high and emphasized qualities will need to include also factual, significant information and interpretations which is urgently necessary for the 21st century man. So the poetry has to be replenished with such documentary and art materials which will satisfy the intellectualizing reader. This does not mean, of course, that the whole poetical field should be characterized in such a way, but it’s clear that the intellectual and actual poem will have the dominant position in the literary filed.

With its central tendencies the Armenian poetry is also ’’condemned” to integrate into the world-class poetical streams, to become one of the unique performers of the international poetic ensemble. Being endowed with national and traditional qualities the Armenian poetic word has an inner strength to transmit some peculiar creations into the other poetries. And it also grasps much better the foreign poetry which have even not striking characteristic features. At the same time, the usual classic poetry will play an important and unique role as before, but I think it won’t be among the vanguards that show the face of tomorrow’s poetry. Perhaps there will also be surprising revelations which will take the verse art to the new horizons.

In restricted society, no matter how paradoxal it may seem, the role and importance of poetry are much greater: being a unique way of expression the poetry is capable with its metaphorical, allegorical and symbolic language to transfer to people the cherished ideas, thoughts and feelings which the other genres of literature or other means of fine arts can do separately  or partly.  Often one or two poems influence on the progress of spiritual and national society more than other national development objectives and ideological forces of that period of time. The poetry builds up not only personality with the healthy inner world, but also makes the social atmosphere at the same time, sometimes it even prompts to the social and political revolutions. Poetry helps people and nation to find their own identity, to move in spiritual and creative way. A lot of poems, such as “A tragedy’s Book” /Grigor Narekatsi/, ”The Arax’s Tear”/Raffi/,  ”I love my sweet Armenia”/ Eghishe Charents/,  ”The Unceasing Belfry” /Paruyr Sevak/, “The Pool” /Petros Duryan/  and such kinds of other works, have radically changed the Armenian’s soul and mind, made him the concerned representative of his nation and humanity. Like a lot of civilized societies the history of Armenian nation is the history of its poetry full of creative achievements and failures. The freedom of work and speech in democratic society is not favorable for poetry no more: It’s come the time to compare the art of poetry with the new realities in different way.

However during the democracy the biggest concern for poetry is not only being modern and actual (which is impending for every new era) but also keeping its sole significance and finding realization in the society in desired portions. It is obvious, that nowadays the poetry hasn’t such demand and popularity than it had up to the democracy. “What should be done to keep the poetry in the first lines of the social and spiritual interest?” perhaps this is the main concern of the present, which refers to the poetry and its further fate.

From the spiritual and cultural pioneers the poetry has turned into an object of “narrow guild’s” interest, it has almost escaped public’s attention, it is used only during jubilee celebrations, anniversaries, festivals and such kinds of measures. For the strong, new-faced, heartfelt, muscular and elegant poetry the natural manifestation’s requirements and invitations seem to become excessive, the doors of public consciousness and places, i.e.: the press, the club-halls, the audio-video studious, libraries, various assemblies haven’t always been open for it. But some time ago there wasn’t held any ceremony without the poets and recitations. There were even such cases when during a not poetical measure was suddenly recited an exciting and fine poem which gave to the event a new spiritual sense.

Unfortunately there are inferior quality works in the poetry filed too, which are, however, easily perceived and preferred by the mass of listeners and readers, consequently the low-quality works receive a high appraisal and deserve a high use value at the poetry’s expense. This process threatens the poetry with the fate of appearing out of game, which would mean the beginning of the great spiritual crisis. And its end is not predictable at all: there are spiritual and cultural decadent periods that last not decades but centuries, even millennia.
…A new era has begun, thus creating and consuming values get new form and sense like a modern man’s psychology and interests. The poetry needs to be in relations with the reader newly and on a large scale, and this problem can only be solved by the poetry creators and masters together with the sensible mediator-organizers.

The re-popularization of poetry should be done by the exclusively qualified works, otherwise the situation will be worse. From the viewpoint of spiritual and cultural interests, it is unacceptable to publish, to spread out and to preach materials in the name of poetry which are neither poetic nor aesthetic, anyway, which are worthless and unusable for the popularization. Of course, it’s not the situation when the worst works can take the place of valuable ones. Adequately providing good poetic materials, the cheapest, tasteless and not aesthetic verse (in which our literature is rich today), which creates an illusion of a rich poetic atmosphere today, will be pushed to the background automatically.

Preventing my possible opponent, I’d like to mention that under the popularization I don’t mean the evaluation of popular poetry and the support of its expansion. At the same time I do not have a negative attitude towards the poetry which is considered as popular: like the other art branches it’s also a birth of present with all its regularities and aesthetic principles. One of the characteristic phenomena of current artistic developments is that the elite, high-quality Art closes to the popular one so much that it is difficult to differentiate them. Not going into the details of this problem (other study material), I’d like to emphasize only that the above-mentioned phenomenon is not only for satisfaction of the interests of a modern man but also a consequence of the artistic standards’ some recessions and a consequence of trying to protect or to save partly the high-elite works (almost equivalent to the new classic ones).

In the nowadays Armenian poetry are stressed two poles: good modern poetry and low-dull verse. None of them are characterized by the feature of popularity. Indeed, not to manifest adequate attitude towards the poetry we can face the sensible danger: first, the dullness may rule over the poetry, and then the indigenous poetry may lose deeply its prestige, and this “artistic miracle” created by people may be extruded out of the spiritual and cultural needs and interests of the new generation. So the main question is: what should be taken in order to overcome the current situation of crisis to the glory of poem…

There are countries where this or that bird or animal are declared as a national value, e.g. Japan, India, China, Australia and others. In Armenia the poetry has been a national value for a long time, but not declared. For Armenians poems are much more characteristic than any other spiritual and cultural manifestation. However, its supremacy shouldn’t be adopted and implemented at the expense of other forms of art, on the contrary, it should be the best example among the other branches of fiction and art, the leader among equals. From the viewpoint of an intelligent and intellectual person the current situation and future of the poetry hence of the art is much more troubling and important than politics and economics, other fields of social activities. How many concern themselves with that!

National, public, social, economic and other kinds of crisis and disasters begin first of all with the decadent situations of poetry. The national progress depends profoundly on the rise of poetry. It improves the language of time, ennobles human soul and prevents his disastrous behavior. Living in a country which is under the wings of poetry the florescence is more scented, the solidarity is undisputable, and the progress of civilization is stable and encouraged.

Let the poetry be a national value for everyone.

Hrant Alexanian is invited to 2014 International Poetry Festival of Medellin. He  was born in 1961, in Artsakh, Armenia. Has received the higher technical education in Yerevan. Since 1983 is occupied in exclusively literary and journalistic activity. Is the author of  1 scientific and 12 poetic books. His literary works were published in translation into the Russian, English, Persian, Serbian, French, German, Ukrainian, Chinese, Romanian, Polish, Bulgarian languages.

The author of numerous essays and journalistic articles. Has carried out voluminous translations of modern writers of the world poetry. Is the winner of the award of the Writers Union of Armenia named after D. Varuzhan. Is the editor-in-chief of literary and art translation magazine "Gegharm".