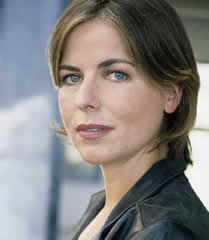 The poet looks at a wall. On his desk – a working surface that should offer access to the wide world and all the unbridled fantasy that lies behind it, or should I say 'within' or 'above' it, for who knows in what way fantasy moves itself – stands the wall, angular and irrefutable.

From my room, I look out at a wall. There is a tree between me and the wall. The stone wall reminds me that everything that I see, everything that I think, is a projection. The wall lets this happen. The wall is a surface on which I project everything I write: the window, the tree, the city of Berlin, which I know lies behind those stones; the city of Amsterdam, which I also suspect lies there. It is snowing in these cities. I see the snow falling.

It is snowing in the mind of the poet and snow is falling from his mouth. Is the wall on the table an imaginary wall? It is very possible. It is as if the wall has grown legs. They are narrow, these legs, but they stand apart, sturdy and self-assured like the limbs of a man who is prepared for anything. The typewriter floats between the concrete and the imaginary.

I would not dare to write with this typewriter. I might fall, in between reality and fantasy. I have always suspected that such a space exists, like the floating, bottomless shaft of a lift. When the world is too much to take in, I need that space. When I cannot get a grip on reality, the space frightens me.

Or is that space imaginary? It is very possible. The poet is open to anything, shuts nothing out. Only now does he see that for a stone wall, this wall is extremely thin. It is a wall made of strawboard. He could knock the wall off the table with a single punch, if he were someone who dished out punches.

From the stage that I have built for myself as a poet, I see a reality. In it, a poet passes by. He moves slowly, held up by a thick blanket of snow. I also look at a story when I think the writer is approaching, is leaving, his office. He is frozen in a moment, a moment that exists like a small white ship, mooring and departing.

When it begins to snow, it snows all the times I can remember when snowflakes were swirling down from heaven. I see myself standing on the deck of a boat, in the middle of the sea. Only the boat becomes white. The sea remains dark grey. I see all the times that I thought that a new world was beginning, in the silent, untrodden snow. It is snowing. And it is snowing images from the past.