Poetry and the ‘God Particle’. By Oumar Farouk Sesay. 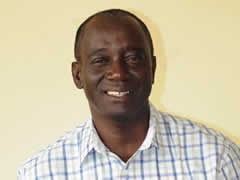 When the inherent insanity of war was unleashed in my country Sierra Leone in 1991, it took away so many things along its path; lives, limbs, properties, integrity, neighborhoods and neighborliness. It stripped the beacons of values and maimed the language rendering it inept in appropriating the enormity of war. It seemed the language was paralyzed by the grotesque; the syntax, semantics, morphology and metaphors develop centuries ago lack the capacity to accommodate the new ugliness. The numbing of the soul took its toll; the victims of our war were stunned, unable to speak the unspeakable. They hoisted a look of hollowness on their faces that told a tale of doom. The language was broken; words that were used to console sounded hollow and mean. The task to reconstruction the broken language was ceded to the poets. Poets gathered the broken pieces to tell the story of the deluge. The telling heals; it avenges the ingrained tragedy of the initial hurt hence the flourishing of poetry in Sierra Leone immediately after the deluge. Poetry recital became healing places a kind of hallowed ground of humanity, a path way to remembering and forging a return to our commonality.

In times of carnage of an epic proportion such as the one we witnessed in Sierra Leone in 1991 -2011 the very notion of survival and existence might have made it almost impossible for people to believe that poets have a place in restoring their dignity; in helping to heal wounds. Yet, central to people's idea of life, is that, the poet, in Sierra Leone, and elsewhere, could look at the eyes of those who had suffered, those who had ceased to believe in a compassionate God, and remind them that, yes, poetry can heal the wounds inflicted upon them.

Poetry, in much of West Africa, takes its wealth and beauty from the oral celebration, in our relations to each other; to our mystic world; of an African sense of aesthetics. Throughout our history, as we battled natural phenomena, as we celebrated our great inventions in art, technology like iron, we did so with poetry. Our poetry was, and is a statement about our resilience to problems and tragedies, domestically and externally inflicted on us.

Poet as conscience of nation played their part in collaboration with others in gathering and piecing together the broken pieces to make a nation whole again. As the poet Mohamed Gibril Sesay suggests in his forward to his anthology of Sierra Leonean poems; “we pillared the broken language with metaphor to tell the story of the deluge”.

Chinua Achebe tells us that heroes and heroines are great, but it is the story that is greater, for it is the story that lasts; it is the narrative that carries the seeds of the human will to immortality. Poets are shapers of those stories, investing them with humanity in the way they tell them, that they become sources of healing. The telling heals; it avenges the ingrained tragedy of the initial hurt.

Poetry has the resilience to want to live even after the deluge. That is it, then, the wanting to continue through the narrative, through the word, the word is mightier than the event it talks about, the word is more resilient, and poetry gives these words a sort of ‘Higgs’ phenomena, for like the Higgs particle, or the ‘God Particle’ that gives some sort of stability and form to material existence, making possible the existence of existence, poetry gives humanity to experiences, it is that which is stable in the retelling, it is that which gives form; beauty, insights, grace, compassion, unto the manifold happenings of the human journey.