“I Still Belong to My Country”

An Interview with Ali Al Jallawi 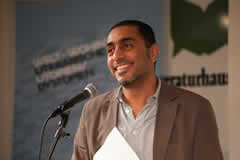 Poet Ali Al Jallawi fled Bahrain in April of this year, one of many political activists, journalists, and writers who left the country rather than risk arrest during a crackdown against pro-democracy protests. In the 1990s Al Jallawi had been imprisoned twice, and tortured, as described in his memoir God After Ten O'Clock. He was active in the recent movement for democratic reforms, and had recited a poem at the Pearl Roundabout, the center of the pro-democracy demonstrations. After his picture appeared on Web sites naming "traitors," and the security forces visited his parents' home, he decided to leave the country. He spent months moving from one country to another, but is now living in Germany. I asked Ali Al Jallawi about his experience of exile so far.

The loss involved with living in exile is obvious: one’s family, friends, food, culture, books, and language are all left behind. Ali Al Jallawi has previously described exile as "the slow murder of one’s memories." I wondered if he found himself thinking less, or more, about Bahrain since he was forced to leave.

"Bahrain is a part of my personality, not just a part of my memories; it is not something outside of me that I can decide to think about more or less." He went on, "It’s impossible to talk in this case about absolute loss, or absolute gain. A life change has two dimensions. There are the benefits of a new life and new possibilities. There is also the loss of everything you have built and accumulated over the years in your country. As far as I am concerned life is the sum of your experiences, so I choose to see this as a kind of opportunity to change what was established and settled in my life in Bahrain. Like any human being I yearn for my family, my friends, and my nation, but now I have to make new friends." He added, "Your nation is not a piece of land; your nation is your sense of belonging. I still belong to my country."

Al Jallawi’s early poetry was very political, and led to his imprisonment at the age of seventeen. In recent years, however, his work—poems as well as a novel—has tended to explore erotic and religious themes which cross boundaries, and has sometimes received negative reactions in Bahrain. Was he already an "intellectual exile" while living in Bahrain? "This is an important question. Let me say, first of all, it’s not that I necessarily want to write about the subjects that are taboo in my country, such as religion, sex and politics, but there is a need to do so. In countries where the regime oppresses the people, and society and religion oppress individuals, there are circles of oppression. I am a reflection of my reality and my environment. Therefore you find in my texts a rebellion against the power of the taboo in sexuality, and the power of myth in religion, and the power of the forbidden in politics."

Nevertheless, it is not a role he has chosen. "It is difficult for me to have all these enemies. I'm not a hero; I simply have opinions about religion, sex, and politics. But society is made up of people; and patience, time, and an accumulation of knowledge are necessary for society to progress." He continued, "It does seem as though I lived in a kind of alienated condition in my country. This is clear from the way the state arrested me [in the 1990s] and now has forced me to leave, and from the way my community has rejected my writing, considering it pornographic, and from the attitude of religious people toward my writing, seeing it as blasphemous and disrespectful of the sacred texts."

He acknowledged that not only writers clash with society. "Maybe this alienation is not due exclusively to my writings; I have a lot of [nonwriter] friends with the same problem. But I refuse to live my entire life being oppressed. The state, society, and clerics all oppress you. Why? Simply because you have a different opinion to the ones they promote."

The Chilean author Roberto Bolaño wrote, "The lawyer or politician, outside his country of origin, tends to flounder like a fish out of water, at least for a while. Whereas a writer outside his native country seems to grow wings." I asked Ali Al Jallawi if there were positive aspects to exile for him as a writer.

"I had wings in my country, but I was in a cage." He went on, "To some extent, exile is a space with greater freedom, though a greater sense of alienation, too. I am descended from a species of jellyfish, as I said in God After Ten O’Clock, which means that I love water—people, love, and relationships. But exile
means you are simply passing by; your friendships, your acquaintances, your home, all that is transient. It might be nice for a while, but eventually you feel that you are lost, that you do not belong. Your own self becomes your country or home where you take refuge, and you feel depressed, isolated, disconnected from reality, as though you are living in an imaginary world."

Al Jallawi switched to another metaphor. "I also hail from a species of bee; when I write I am making honey. For that I need to be surrounded by fields and flowers—freedom, stability, and the possibility to enjoy life."

Did he think he’d be able to return to Bahrain one day? "Justice, equality, and freedom are words in Arabic, too. And I am in no doubt that they will become reality soon, and that I will return to my country." He added, "Just days ago a policeman killed a fourteen-year-old Shi’ite boy. When that happened I put my hand on my heart; I was afraid for my son, who is only ten. I began to understand better that the next generation is a different generation: a generation that stands bare-chested in front of a gun barrel, a generation that rises like a phoenix every time the regime tries to kill, torture, or imprison it. Yes, I will return soon to my country. I will return to a Bahrain of democracy, freedom, and equality, a safer Bahrain, all due to the efforts of its brave people."