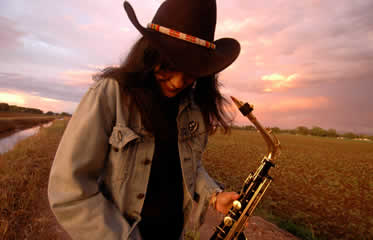 Joy Harjo is a craftswoman of poetry. Her poems are constructed with such precision and graceful narration that I don’t consider them to be mere poems, but sermons. She isn’t only a poet. Harjo’s a performer, professor, playwright, and musician with the band Poetic Justice, and recently a memoirist (her memoir Crazy Brave came out in July 2012 from Norton). She is the recipient of the National Endowment for the Arts fellowship, the PEN Open Book Award, and the American Indian Distinguished Achievement Award, among many other accolades. Through her art (and beyond), she’s an activist, pioneering for the recognition and respect of indigenous and writers of color within the realm of literature and academia. As a Native American of the Muskogee Creek Nation, she was born fighting for rights of indigenous peoples in her homeland of Oklahoma and throughout the country.

Harjo’s distinct and brilliant style of prosaic poetry is what inspired me to talk to her. Her poetry is rhythmic in a way that I have never known poetry to be. She consistently employs a subtle level of repetition in her poetry, which, depending, can make her poems sound political, forlorn, or exhilarating.

I was fortunate to briefly converse with Harjo over e-mail about her memoir, her journey as a writer, and her theories on poetry.

The Rumpus: In your memoir, Crazy Brave, you talk about the “knowing.” The “knowing” is a clairvoyant inkling that lets you know when life is going to change course. How does the “knowing” play a role in your life today?
Joy Harjo: The “knowing” is a vast field of intelligence beyond mental clatter and any kind of dividing line. It can be seen as a being, and it is, many beings, and it is, a geometric flow, and it is—it is part of all of us, or, we are part of it. The intelligence is metaphor to the thousandth-plus power. It is small and it is large. Creative artists immerse themselves in this flow. You cannot force it. I believe you can feed it or turn your back on it; no matter—it is still dynamically at work.

I listen to the “knowing” more directly and willingly than I did when I was younger. I tend to by hyper-analytic, which is useful, especially in revision, but not when in the creative and/or listening mode. I’m learning how to shift and how to trust.

Rumpus: How has the “knowing” influenced your writing? Do you feel like your style has changed as your awareness has grown?

Harjo: The “knowing” is part of the inherent person. A person is many streams of events: persons come together in a coherent structure (or maybe sometimes not so coherent!).

Rumpus: You attended high school at the Institute of American Indian Arts and studied a myriad of mediums, among them poetry. You say in Crazy Brave, “We began to understand that poetry did not have to be from England or of an English that was always lonesome for its homeland in Europe.” Do you think academia and the industry of poetry has becomes less Anglo-centric? Do you think we’re progressing in the respect that popular poetry is becoming more diversified? Or no?

Harjo: As a poet, I was present at the beginning of the multicultural literary movement in the mid-’70s. There was great resistance in the academy. There still is. I was told that a voice against my hire in a major university believed that multicultural literature was a sham. This was in 2000. A colleague in my first university hired in the mid-’80s sauntered into my office and called me a primitive poet. And anything of indigenous/aboriginal origin often falls away into the “disappeared” or “exotic other” category.

Some of us emerge despite the difficulties. Poetry is always diversifying. That is the nature of art. There will always be stalwarts of Euro or even other classical traditions, who dismiss any version or branch. This is true in Muscogean dance traditions, jazz, or any other form.

Rumpus: I think of your poetry as anything but primitive. Your poetry always has a very strong, fresh narrative voice. How did you struggle against the “disappeared” and “exotic other” labels in your writing?

Harjo: I still struggle, or rather I should say, I am aware that these forces of thinking are still very present—there’s an investment in this country and perhaps all of the Western hemisphere to disappear indigenous peoples. It’s not necessarily a calculated plan. The disappearance happened when physical, mental, and spiritual violence was used to take over lands, when indigenous peoples and cultures were pronounced inferior or even demonic. To accept that there are still indigenous peoples with major cultural and social accomplishments means that the story, or the wound, will have to be reopened and examined. I just have to keep moving and honor the indigenous presence within myself. That’s not necessarily an easy thing to do in this American social structure.

Rumpus: You mentioned that Crazy Brave took you fourteen years to write. For someone who ingeniously cranks out new art, music, and poetry at such a frequent speed, I gather that writing your memoir must have been a very deep, visceral undertaking. Can you expound upon the experience of writing it, and how has its publication affected you? Harjo: There were three starts to the memoir. The first was as a collection of memory riffs, based on songs. That title was A Love Supreme. The second was as a short story collection. That book, when I stopped that track, was at almost two hundred pages. The third was a collage of vignettes, stories, dreams, and poems. A year before publication, my editor at Norton, Jill Bialosky, wrote to say that the book was being called in—and I gave up and wrote the memoir that was waiting for me to be brave enough. I thought I was only seven years late, until I read the contract after turning in the final manuscript. I was horrified that I was fourteen years past my delivery date. The first days of publication, I felt stripped down and raw. That feeling is both terrifying and liberating.

Rumpus: You say “poetry came into the world with music” and that “most poetry isn’t on the page.” Do you think that with the advancement and popularity of technology we are reverting back to the indigenous style of poetry, and veering away from the academic format? Or do we continue to remain stagnant?

Harjo: I believe that we always return to the root, in some manner or other—there’s a kind of spiral looping back to keep integrity of form. Even written-down or printed forms are inculcated with elements of orality. Poetry, dance and music came into the world together. The academic can be rigid and dogmatic at worst, and at best, rigorous and demanding in preciseness of form. When I say “academic” here, I mean verse with Euro-Anglo derivations.

Rumpus: Your poetry and music are obviously void of such derivations. Do you think you would be a musician if you hadn’t been a poet first?

Harjo: I am a musician…I was going to say that if my music hadn’t been so stifled in my early teens, I would have been a musician first, but my writing was not safe in my home. It was most likely less threatening to take to a pen than to perform with my voice and a horn. You cannot hide when you are singing by voice or horn.

Rumpus: You say that poetry is “to get to that place without words.” To me, that means poetry is a journey of speaking and it ends with catharsis. Could you go into detail on that statement?

Harjo: The first time I stated this was probably in the mid-’80s, when I was in Denver and spent several nights a week in the jazz clubs, listening. I wasn’t playing saxophone yet. I heard where music could go that words could not—words can be more easily bound by culture, language, and other expectations. Music also has parameters of construction and expectation, but can saturate and move—beyond words.

…I don’t believe I particularly mean that a poem necessarily must end with catharsis. Words are representations and architectural materials for a structure through which meaning is derived, through which spirit can move. The “without words” is that which cannot be finally captured. It can be experienced. Catharsis can be the initiating impetus or occur many times within the body. Catharsis doesn’t have to necessarily be the end event.

Rumpus: With that theory in mind, what poets do you share the stage with (metaphorically)?

Harjo: Robert Sullivan, the Maori poet, comes to mind. Adrienne Rich, Audre Lorde, Jim Morrison, Jayne Cortez (a great inspiration in my journey to return music to poetry in the original traditions of poetry), Ray Young Bear, Patricia Smith… I’ve literally shared the stage with Cornelius Eady and my Arrow Dynamics band for the New Mexico Jazz Workshop’s Jazz Deconstructed series. We performed our original songs. Both Cornelius and I sang. I played saxophone and flute.

Rumpus: Are those the same poets who influence you?

Harjo: Yes, and no. Charles Bukowski was an influence. Pablo Neruda. One of my utter favorite poets is Mahmoud Darwish, the Palestinian poet. There’s Ruben Dario, the Nicaraguan poet. Then there’s the poet of saxophone, John Coltrane. I would also include Jim Pepper.

I always tell younger poets to feed the source of the poetry. To give honor and thanks to those who came before us, and to take care of those who are following. You can do this by honoring your mentors with your gift, and literally feeding their spirits. When I taught creative writing classes at the Institute of American Indian Arts in 1979 and 1980, I involved the students in teaching creative writing to Albuquerque Indian School high school students. We are in a dynamic continuum.

Rumpus: That’s a great teaching method. How has teaching shaped your poetry?

Harjo: I’m not sure that teaching has shaped my poetry. I have been inspired by teaching, by being in the classroom, which is an active creative space, or can be. The atmosphere of competitiveness and rigidity in academic institutions in this country has set up major tests for me. I have had to learn how to make it work on behalf of my students and myself. Sometimes we even fly a little. This whole earth is a teaching institution.