Why Go On with Poetry?

Why go on with Poetry? 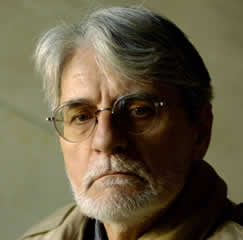 Two centuries ago Hölderlin wondered about the purpose of poets in those godforsaken times. The world was god-forsaken because the gods had deserted it, had fled away from man, who had pronounced himself the crown of creation, donned the cloak of the will to power, become arbitrary, self-sufficient, self-infatuated, a Narcissus who gazed at himself in the water surface as in a mirror, recognising himself, his imaginary beauty, as the supreme law. As the subject (sub-iectum) of everything, to everything. He was turning into a hypersubject, master of himself and the world, which appeared to him as a (more or less fair) semblance, luring and enticing him to enter, to pace it from east to west, from north to south, to explore and name it. And with a song on his lips, man marched into the world and beyond. Thus ripened Time, the product of the human creator’s hands, which seized man in his jaws of steel and began to maul him. Thus Adorno was compelled to write that poetry after Auschwitz was no longer possible. Because the incinerators had witnessed the dehumanisation of man, even though the tall brick chimneys had been built by man himself, the hypersubject run wild, who had renounced his self so as to fuse with the Idea of the Overman.

The Slovenian poet and Partisan fighter, Edvard Kocbek (1904–1981), wrote during World War II that poetry was the path of man’s self-realisation, man’s strongest authentication. Two centuries after the emergence of the famous essay A Defence of Poetry by Percy Bysshe Shelley, one of the major Romantic poets, poetry was to prove once more its indispensability, its persistence, its prominence in man’s spiritual life, similar to its original position among the ancient Greeks, in the work of Heraclitus, when thinking and poetry were still one. When the logos and mythos were still brothers, the future Cain and Abel: when thinking, out of curiosity, love of wisdom (philosophy), rose to the ruler’s place and the Idea was born. And, according to Hegel, when art was reduced to the sensual semblance of the idea.

The wheel is come full circle: the sensual semblance is nothing but appearance, a guise, a mask. Indeed, it is an illusion which had, through world-scientising technology, de-generated into virtual reality. Language is no longer the essential tool of human communication (of dialogue, which gave rise to thinking!) but merely one of its countless possibilities. Therefore the language of literature, and of poetry in particular, is but one of the many languages (dialects?) used by ever fewer people. The bird alone is still singing because, according to Jesuit Anthony de Mello, it has a song.

Taras Kermauner, a dedicated chronicler and researcher of Slovenian poetry in the later 20th century, particularly between 1950 and 1980, believed that poetry pronounced the truth of the (Slovenian) world. From Burnt Grass (Požgana trava, 1958) by Dane Zajc to Anti-America (1982) by Borut Hlupič. Kermauner named (and thus established) the currents of Slovenian poetry in the later 20th century (reism, ludism, carnism, linguism, mysticism). In the early 1980s, with the dawning of a new (?) era, he detected in the work of, for instance, Boris A. Novak the birth of a new humanism, no longer carrying nihilist germs like the humanism enjoined after the war, which had promised Paradise on earth.

And what is the truth of today’s (Slovenian, by now globalised) world? Contemporary man, gluttonous man, the man of our shallow era is experiencing a loss of the world because his guise, albeit crafted with cutting-edge (3D) technology, has conclusively proved to be an illusion. A mere nothing successfully marketed by corporations in the developed and ‘Third World’ countries alike. Once more (?), poetry is faced with the question of its own existence, of the sense which it should, as the truth of the world, bestow on this same world. Is this even possible? Is it possible for poetry, the most innocent of human tasks according to Hölderlin, to ‘compete’ against the other ‘media’ which are overwhelming contemporary man, deafening him with their barbarous tumult?

Poetry need not compete against anything or anyone. Poetry is no mere refuge for the man who is seized by a horror of nothingness, realising that he has lost the foundations on which he had been building ‘his’ world for millennia, transforming it from home into prison. Rather, it is man’s strength, the strength of man’s language, capable of naming the world’s ultimate secret, the world’s final miracle. Over the last two centuries, poetry has discovered a hundred, a thousand paths to the sense, to the truth of the world, testing countless ‘poetics’ and ‘aesthetics’; it has even reached the point of discovering that the only genuine poem is the one written for the pure joy of composition (Baudelaire) and that the supreme beauty is Nothingness (Mallarmé); having climbed the highest mountain and arrived at the end of the horizon, poetry, for all its intoxication with both pleasure and asceticism, realised that it would have to force its way through a wall of polished steel – the mirror of appearances – and to become (again?) the voice of man, of his ‘heart’ rather than of his fascination with the play of appearances/pearls.

The ‘nihilist deformation of the world’ (Kermauner) has left in its wake both desolation and thick tomes written on the aesthetics of world-deforming poets, such as ludists. The composition of poetry can and must be no longer an agreeable afternoon stroll through Nature’s temple but ‘a life-or-death race’. The essential question of this sobered-up poetry, as it may be called, is neither ‘How?’ (such poetry has been dubbed ‘philo-technical’ by Slovenian poet Niko Grafenauer) nor ‘What?’ (philo-sophical) but: ‘Why?’

Why a poem? The answer to this question is the poem itself. No longer a mere system of signs – signifiers and signified, no longer merely the result of an aesthetic effort to verbalise the ineffable and to complete with consummate skill the process named poiesis by the ancient Greeks, a process in which the non-existent crosses over into the existent, the poem has to deepen our ‘shallow era’, which is but the faintest shadow of the former ‘god-forsaken’ time, and bestow on man the faith which he has forfeited in his wilfulness. In a word: no longer aesthetic but ethic. Ethic without moral(ising)! This is the task awaiting poets, those poets who will grasp the meaning of Rimbaud’s ‘horrible workers’ who, in an effort to be seers, unceasingly ‘dissolve’ all their senses, by day and by night, asleep and awake. It is only with the annihilation of ossified conceptions, emotions and thoughts, ideas and practices, that poetry makes sense and is able to pronounce the truth of today’s and tomorrow’s worlds.

Therefore it is vital that poetry should persist, not allowing itself to be banished from man’s home, from the house of Being, and that, even at the cost of a superhuman effort, a new poetry should be born – a poetry to be both poem and thought once more, when thinking and poetry are reunited. And the farther, higher and deeper the reach of the thought, the stronger, more powerful the poem.