2nd World Poetry Summit for Peace and Reconciliation of Colombia 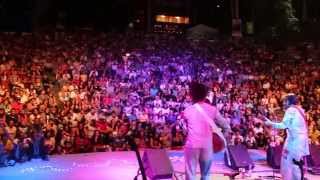 The Second World Summit of Poetry for Peace and Colombia´s Reconciliation welcomes poets, artists and delegates from 40 countries. The Summit will involve 40 activities, both internal and external, promoting teaching, poetry and artistry in regions which have an urgent need of an environment in which peace and reconciliation are possible.

One of the objectives of the Second World Summit of Poetry for Peace and Colombia´s Reconciliation is to start a movement and bring about social qualification, with processes in line with the strategies, principles and actions that are to be carried out, and with the guidance of poets, artists and cultural leaders.

The Summit proposes an essential aspect which has simply been overlooked in the Havana peace talks: poetry, art and culture as vital components in the reconstruction of a country ravaged by war.

The main themes at the Summit for Peace and Reconciliation will be: Works of poetry and art in the creation of peace, for a new language and new culture; Poetry and Art: defending the earth and living beings; Poetry and the impossible made possible:  Global actions for transforming life.

In the Summit (which will include 27 events) there will take part renowned poets from five continents (some of whom have gone through hard social and political conflict, and have been key players in the peace processes in their countries); the Summit will offer feasible proposals for peace and reconciliation, developing creation processes in the communities, so that the latter may recover their memory and leave hatred behind, contributing to the making of a more active and constructive, just and democratic peace (as opposed to war).

Organizations that promote Human Rights, the empowerment of women and the indigenous and black populations, as well as student organizations, will play a crucial role at the Summit.

Throughout its 25 years the Medellín International Poetry Festival has constituted itself as a civil resistance movement in the face of barbarism. Since its genesis the Festival has structured itself as an organic process in the search for peace and reconciliation.

In 2003 the First World Summit of Poetry for Peace and Colombia´s Reconciliation was held, at a time when any peace initiative was stigmatized and, paradoxically, deemed subversive. Not an insignificant amount of threats were handed out.

A National Meeting of Poetry and Art for Peace was also held in 2007, and became a starting point for the creation of a national movement of poets and artists for peace.

The 24th Medellín International Poetry Festival saw the inclusion of the Colombian Forum for Poetry, Art and Culture for Peace.


Language and culture are damaged. Now is the time for poets, artists, teachers, facilitators, community leaders, youth networks and networks of social organizations, children and young people to mobilize by channeling their poetry and art into processes which yield concrete results, such as transforming a language broken by violence into something more vital, which triggers new names for what needs to be founded. A long-awaited peace and reconciliation for Colombia.

Poets and artists are even more essential to breathe life into culture and daily community life with their visionary eye and spiritual joy.

It is imperative that we transform negative symbolic references, and reflect on the tantalizing possibilities of peaceful coexistence, peace and reconciliation.

Defending the earth and all living beings is of great urgency for all of us humans.

Poetry and art are essential parts of the transformation of an imagination that has been corrupted by the plundering of natural resources.

It is worth remembering what was said by a group of poets from native peoples in their document Defending the Earth (the result of the Celebration of the Earth with Native Peoples Forum held at the 24th Medellín International Poetry Festival in 2014):

"The earth is the Great and Fertile Mother of all humans, its being is the pairing of matter and energy, which becomes the body and spirit of us all. It is the earth because it is air. It is earth because it is water. It is earth because it is light. It is earth because it is a combination of vital elements: living vegetation, living animals, living minerals, living unicellular organisms... But our Great Mother is a fragile organic system, extremely vulnerable to the unknowing actions of her human children. Brutal acts that become mortal when we ignore or fail to appreciate that the Earth makes us breathe through her own respiratory system, her springs, her air currents, her photosynthesis...; that she nourishes us by her furrows, her roots and her humus...; that she shelters us by her light, her atmosphere... How then can we celebrate her without first protecting her?"

This chapter attempts to demonstrate our drive to create poetry that speaks to the utopian dream, helping us to renew our bonds with all things and beings that populate the earth.

This main theme will be illuminated by an invitation to a world poetry revolution, which was announced at the closing of the 24th Medellín International Poetry Festival in 2014.

"We call on all humans to rise from the dust of defeat and to build with great passion and energy, before it is irreversibly too late, a better world, filled with poetry, social justice, dignity and truth, beauty and plenty. A magnificent emancipated world, in the embrace, fraternity and confluence of mutual recognition.

We extend the invitation to all the artists and poets of the world and to their social organizations to take part in a continued spiritual and cultural action towards a planet without war or hunger, towards a free and fair Earth, in the embrace of a World Poetry Revolution”.

Observation: The first of the main themes allows us to cover themes such as:

The importance of poetry, art and culture in collective historical memory and cultural identity. The inclusion of the voice of victims in the artistic processes of cultural regeneration

The contributions of poets and artists in the search for new cultural policies will try to bring about an atmosphere of permanent peace, one in which dialog is at the center of political life, both now and in the aftermath of conflict.

The Summit: There will be three components to the Summit.

Educational Component: There will be 19 conferences led by poets from countries in conflict, who are or have been major players in the peace processes, and by others well-versed in these themes.

Plenary and Committee Meeting Component: Three commissions will be set up, one for each theme.

Inauguration: The Summit inauguration will take place in the Pablo Tobón Uribe Theater on the 13th of July 2015, i.e.one day before the opening of the plenaries.

On the 14th, 15th and 16th there will be interventions of 12 to 15 minutes each. In the evenings will be the committee meetings, as well as panel discussions, conferences and poetry readings.

Poetic and Artistic Interventions Component On top of the readings there will be musical concerts, theatrical monologues and a cycle of documentaries concerning great poets of the twentieth century.