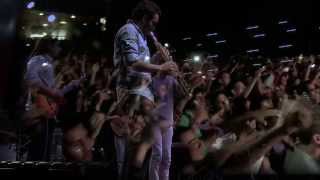 “He who cannot win with words, should not win in any other way”

This conflict that has torn apart our country for decades is a symptom of old illnesses: injustice and dispossession.

The same as war industry has undermined the jungle, the fields and the streets, it has made a stronghold out of language and a world logic out of militarist ignorance.

For decades, we have been told we were born out of violence and hatred, and that such overload constitutes our identity and destiny. Hatred’s ignorance has produced the impression that war is inevitable. The peace process is not a gift but a conquest reached after decades of activism by social, peasant, indigenous, afro, women and student movements, together with the majority of the Colombian population.

Land restitution should occur at the same time as peace restitution, which has also been elusive for such long time, to the point that we can barely remember it as part of our history. We would also like language to be demined, embraced by the mass media, who would thus become originators of a new imagery of reconciliation, and break up with the verbal belligerence that has become habitual.

Continuous war propaganda has not been able to extinguish our memory. Returning to the origins of a concealed ‘we’ is possible. A place where spiritualties resist as they bring us together fraternally and join us with Mother Earth, empowering community values.

In spite of the media generated pessimism, there is no man or woman in Colombia who don’t harbor the dream of national reconciliation, imagine a reign of justice, and long for battles different from those of ideas. Peace has a real chance in this event, which represents everyday hope amidst an order of death.

Poetry and art can transform the pain and tragedy experienced, in memory and strength, so that they can uphold life and defeat the death’s tricks. Preparing ourselves to transform the deep wounds produced by injustice and its military display in Colombia, commits us all to reflect upon this discontent, but also helps us recognize what we were before breeding it, and what we someday may become, once we have gotten over it. If we claim, without hesitation, that poetry is an attained utopia, peace should be an attainable utopia. That attainable utopia will bring back to our eyes the country they have kept harnessed.

The present is a future already accomplished, therefore we shouldn’t make tomorrow responsible for peace. The future is today.

We must promote and materialize a multilateral ceasefire, so that the weapons of all the actors in the Colombian conflict may be silenced, so that wide paths to full agreements may be opened in order to eliminate the causes and consequences of wars.

The country needs a new institutional framework, a new social agreement that guarantees justice, an actual rule of law. We offer, starting from that new institutionalism, the creation of a Ministry of Peace. As an example, we outline some possible points that give basis to the aforementioned Ministry:

1- To ensure and cherish the memory of this long process and the future of our existence as peoples identified with dialogue and coexistence.
2- To rethink public policies as procedures necessary for a common truth and identity.
3- To make social justice viable to remove the most evident causes of the conflict permanently.
4- To propose from the various cultures that constitute us, meetings where the difference and poetic dialogue are considered valuable.
5- To overcome the status of victims and perpetrators imposed by the logic of war, and create, together with communities, new ways to understand each other and to assert ourselves as a people.
6- To ensure free access to mass media by the communities.
7- To give visibility and enhance the historical role of poetry and the arts, to build a deep and true peace.

II World Summit of Poetry for Peace and Reconciliation of Colombia.
Medellin, July 17, 2015.