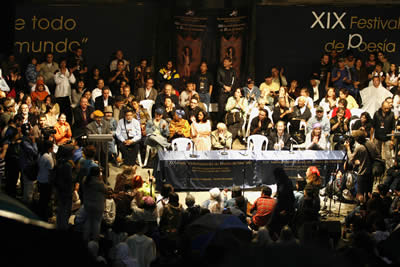 With the aim of strengthening the climate of peace and reconciliation of the Colombian people and of expanding the dialoging and visionary spirit of poetry, in a city sorely affected and segmented by complex social problems, there shall be celebrated, from July 11th to 18th, the first 25 years of existence of the Medellín International Poetry Festival, one of the great icons in the struggle to overcome the deep hatred that divides us due to a long conflict, and to materialize utopia in our country.

In parallel to the Festival, Alternative Nobel Prize in 2006 and national cultural heritage, main events shall be held, such as the 2nd World Poetry Summit for Peace in Colombia, the 19th Medellín International Poetry School, the International Meeting of Poetry School and Workshop Directors, the Meeting of the National Coordinators of the World Poetry Movement in different continents and countries, the World Young Poets Meeting, and an International Poetry Translators Meeting.

The 25th Medellín International Poetry Festival –organized by Prometeo Magazine, with the attendance of 100 poets from over 40 countries through over 150 poetry, musical, academic and artistic events, and which shall include rock and rap concerts and several photography and art exhibitions–  shall also be the framework for honoring the winner of the I René Char World Poetry Award, launched last December by the Festival, which will earn the winner US$ 6,000 and an air ticket from any country in the world to take place in a Festival which is a world pioneer in social and cultural impact on contemporary society.

The 2nd World Poetry Summit for Peace in Colombia will include panels, conferences and dialogues between world poets who have taken part in peace and conflict resolution processes, specialists in the field, artists and peace builders, human rights defenders and environmentalists, who will submit to the country documents with their recommendations for strengthening the will for a new country that is really just, harmonious, democratic, peaceful and poetic.

Additionally, the Festival shall edit and publish #102 of Prometeo magazine, which shall include poems and essays by the guest poets, a Report on this international event’s 25 years’ history, and a world poetry anthology by bards from 150 countries who have taken part in this event.

Although the Festival does not count on the support of private enterprises, it hopes that entrepreneurs shall take part in this celebration that has long been at the fore of Colombias cultural and spiritual movement for plural dialogue between the Earths poetry and cultural traditions, for the building of a creative and inclusive environment, and for a whole and just peace, within the context of a democratic culture.