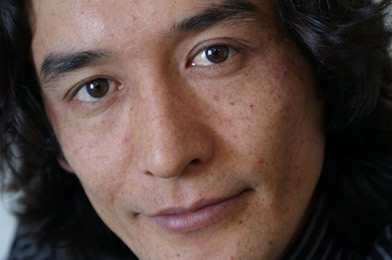 Basir Ahang was born in 1984 in Ghazni, Afghanistan. He is a Hazara poet, journalist and human rights activist from Afghanistan. Basir graduated with a degree in Persian Literature from Kabul University in 2007. After receiving threats by Taliban for his activities in Afghanistan, Basir Ahang moved to Italy In 2008 where he continued his university studies in International Relations in Padua University. He has published Sarzamine Badamhaye Talkh an anthology of his poems in Persian. In 2014 one of his poems won the Special Jury Award at the International Poetry Festival of Sassari (Italy). His poems have been translated in Italian and English. In 2015 his poems will be published in Italian by Gilgamesh Publishing Company. Basir Ahang is also a member of IFJ (International Federation of Journalists) since January 2009. He wrote many reports and made a documentary about the refugees and asylum seekers in Europe and particularly in Greece. A part of this documentary was broadcast on Rai 1 Italys public television. Ahang has so far, written hundreds of reports on refugees and their legal rights, women rights, freedom of speech and human rights violation in Afghanistan. His articles are written in Persian, Italian and English which are published in different online and printing media such as Kabul Press, BBC Persian, Radio Zamaneh, Deutsche Welle and Hazara People International Network.

Bogotá!
Live long your rainbow
And ‘Providencia’, the jewel in your crown
You, the golden, red and blue land
Will echo in the song
‘La Sonora Dinamita’ will play on
With the Cumbia dance
And its steely-chain sound
Bearing on the ankles of slaves
A message of freedom

Smile!
Now is the time to stand again
It’s more than half a century
That beyond these dark clouds
A reckless cobalt sky has breathed
For half a century
‘Providencia’ the paradise
Has waited for your spark
To break at last the broken cycle
And bring hope to its green coast
Gabo will write of no more love in the time of cholera
And your children of tomorrow
Will take each other’s hands
To dance the Cumbia and the Vallenato

Stand up!
Bolivar is waiting for ‘Totó la Momposina’
To begin murmuring a song
Heedless of the tobacco taste still bitter in his mouth

This Moment is Mine

This moment is mine
Because of the journey, the discomfort
And all that was but is no more

My footprints trace borders innumerable
From Kabul to Rome,
From Tamerlane to Julius Caesar
Passing through lands stained by Gobineau

Without meaning to
Picked up guns

This moment is mine
And I will give it to the tears and the screams
Until the reflections, the echos
Wake the deaf, restore sight to the blind
Of my city

Than the soles of my shoes