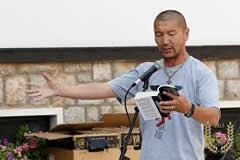 By Galsansukh Baatar
Special to Prometeo

In this era of overloaded information, it may be nonsense to write about 'pure' poetry separately from politics, economy, sciences, religion and other issues. In the other hand, it seems to be my duty (as I've been dedicating myself for poetry for all my life) to write inevitably about it. A Mongolian renowned scholar of 19th century wrote:
'For what to take a light brush pen

If one cannot move the soul and mind'. If to dig deep into the meaning of it, the two-legged human beings all have 'an organ called Soul' and the only 'weapon' to heal or 'kill' this organ is the 'Word'. This tool of word has only one measurement index of 'Poetry' that reached a higher level of quality.

The mankind has been creating, reading and studying this 'Poetry' in their native tongues, each with their own unique features of 'Mongolian poetry', ''Colombian poetry', 'English poetry', 'Russian poetry', 'Spanish poetry', 'French poetry', 'Japanese poetry' and 'Chinese poetry'. However, the final standpoint or cross-section is that the purest word art of vocabulary and meaning that exceeded these limited boundaries of national culture and language is the authentic poetry.

We all have the senses of love, hatred, fury and bliss. There's no 'Vietnamese tears', 'Australian kiss', 'Canadian fist', 'American hug' or 'Arabian hatred'. Therefore, humble me do believe that the real poetry has capability to be translated into any language and has to have such magical power to touch everyone's soul, making them cry and enjoy. Thus, I do consider that the poetry shall be 'distant' from politics, economy, sciences and religion. If the poetry is mingled with politics, it's not a poetry, but a propaganda. If it's mixed with advertisement, it's not a poetry, but a promotion. If it's tangled with sciences, it's a dissertation and if the poetry is fused with religion, it turns into teachings. In addition, the poetry relies on two main systems of sedentary civilization and nomadic civilization. It's not a continental division of Asia, Europe, America or Australia and it's not a definition of countries like Russia, China, America or Spain.

The nature has its own law. Everything exists with reason and in harmony in this universe. It's the Law of Tenggeri that if one contradicts this concord, it goes wrong. No human, smart or genius, cannot change this law. A doe delivering a fawn, carnivores catching that fawn as a prey, grass growing, poisonous herb growing inside it, earthquake and volcano eruption all occur under the Law of Tenggeri. We, Mongolians say, the sheep fall ill in absence of wolves. The world itself has the law of survival. Thus, a limp gazelle becomes the prey of wolves. The democracy announces to save everyone. The Law of Tenggeri declares only those who are healthy, honest and strong shall survive. That's the difference. The Law of Tenggeri requires to let those who shall die, depart this life, care those who needed, condemn those who shall be put to death and reward those who deserve.

Mongolians have had a tradition to depart this life at their old age by their grandson, with a firm belief of leaving this life on time after seeing their progeny are born to carry on the generation. To say frankly, the mankind is overpopulated, among which many keep (reserve) their aged parents with injections. They believe it's the love. They err that they love their parents so much. For us, in accordance with the Law of Tenggeri, it's like torturing them.

As in the clouds, a golden breasted and silver buttocks boy
Plays jaw’s harp sinking in bliss and joy,
Me, while standing and imbibing egg and watching myself
In mirror thinking “You won’t be fixed and improved”
The yellow green bee intertwine the stems of
Bright blue, deep marine and soft
Red flowers collecting honey like pure gold
Before the watery rain from the horizon of the sky
Unrecognizable marking, a sign, signal, gesture
The gate of Valhalla – land of souls of warriors seen and
Died like the silver forks between the cloud’s gap. The time
Becomes a turtle, turns into a fast horse
Then is beaten by the hurriedly falling rain drops
And shatters disappearing then turns into pond
And then runs into the nest of ants
And my standing at the totally drenched granite square
Where the monuments of birds, marmot and antelopes illuminate
It seems like I cross the ocean skipping the continents
Standing on the countless many black bugs
The raindrops dripping from my wings spatter crackling
On granite square like pearl necklace is torn off on forehead
A glossy black crow flaps its wings slicing through heavy moist air
Lands on my shoulder elegantly and croaks voicing like gur gur.

The sun and the moon cross their paths like toy soldiers
And chase each other like it says in the fable that
I chase the lama, the reverend and
The monk, the reverend chases me /or/
If looking clearly, they look like cheap motels
Along the road preparing khuushuur, buuz, tsuivan,
Dishes and offer hot blanket and soft bed
Standing next to the road, so as I CLOSE MY EYES
And part from the world, silver does fly
Slicing the golden autumn, disputeless event
Of which the meaning is revealed causes doubt.
The principle of uncertain obscure and vague things
Is disclosed, it seems to be easily like cartoons
That are animated, funny, amusing, innocent and
Sudden, I understand how it’s easier to listen
lightning
A cigarette rather than talking and learn
How beautiful it is to walk and go than sitting
In a forest attracting like magnet I watch wolf trails
Bear hibernacula and mushrooms like
Drunken parachutist, listen to brook’s laugh
I wish to go and see the Gobi fountain-like mirage’s gliding
The tears of the camel colt running to its mother whining
Then to watch and wonder about the tolerance of Saxaul;
From the animals, beasts and birds and things
That have thoughtless brain to not know their names
I find calmness, rest my brain and OPEN MY EYES.

Mist and fog prevail atop of trees like braided old men
The thunder strikes chatter like suddenly speak of wrong
The fight between the sky and the earth reaches its ultimate point
My body so worn out would be melting and
Flowing in between like steaming hot ice
Like crossing the river by paddling in boat in the darkness
As I star dropping in splash my body turns into goose flash
Like the magpies like blue flame of candle noise
My head gets dizzy and my mouth dries up just in standing up and sitting back
I lose consciousness while flying and get alarmed
To see the pure whites circles and further
Not the white but red shoes will save me
And make consciousness. The PRESENT lets understand
Each premonition with unknown meaning
Shall keep its meaning and wait for its time,
It’s meaningless to ask “What time is it now.”
And as a black dog barks making sound of khav khav
I get refreshed and repeat the drum sound with my fingertips
And get up aroused and wash my teeth, my toothbrush becomes
A toothpick, yesterday’s dried meat, leftover of today’s chicken
Are cleaned off in a hurry and after a MOMENT as I
Flush the water, my body gets relieved
And white combing my wings I realize the LAMP
Watches following my every movement
And my tongue stiffens not being able to find a word to say.

Like the air kiss like the wet dream
As I think it’s necessary when I have nothing to do
And cause useless things, harmless mistakes like an interjection
From my deeds I’ve done and are left in my mind
Like photography, and still are reminded in my soul
Even when I read aloud fairy tales for my son
Or when I watch a bay duck swimming in a pergola
Or a fine lake while shielding my eyes with my hand
It makes me sigh and suffer my mind and soul
Like the person who’s flown slipping on the rock
With covered with green wormwood or the one
Who offers one’s lower garment in front of snake gathering
To ask for blessing, my soul gets twisted and shaked
And my soul gets relaxed sleeping so deeply
After being defeated by my sleep like lullaby,
My soul is relaxed like Sunday and feels like a baby
As it gets clear like a noun or adjective,
It welcomes the events like midwife and form acts
It concentrates like governors and sees the end in advance
And counts/relaxes/whether to break into the tree
That we’ll see at first or to go around it
And like sitting on a red orange carpet and meditate
/I get calmed/ my environment gets enlivened and colored
The fine scent is spread/gets landed on my planet/my soul was separated
From my body and was being fried thrusted in a rotisserie.

My brain to listen pillow noises like chaos after flooding
As thinking of the world of earth/thinking of such nonsense/
My ears buzz like a golden bumblebee and as I lie facing upward
My eyes get dazzled like a quarrelling old woman; and
As on my tongue I put a drop of milk and a slice of bread
I get the feeling of nausea and at once I start to vomit
My toes get stiffened stretching out like dolls, my cheeks
Reddened in fever, in my palms the sweat drops emit profusely
My mouth dries up horribly and as my back pain in burning
As the words that none will hear evaporate from my bosom and
Dries up on my throat, my dried lips got stuck
To the tongue and the smell of ready-made noodle
Makes my body move and again my brain
Gets into chaos like the description after the flood
So noising, the spoons and scoops to walk and run
The broom, the bowl and funnel clean the home
My few books dig their plugged nostrils like unloved children
And sit frozen shivering and moving their dangling legs
Look like they are going to lose their dad. The cups and plates
Get dirty and filthy and weep, but this HORRIBLE
IMAGE is cut by an only silver fly that spends winter together,
Flies flapping its wings and sits on my pillow that brings the bright crack of dawn.