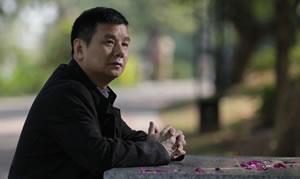 Yang Ke     is a prominent representative of the “folk writing” movement in China and witness to many vital moments of Chinese poetry in the past thirty years. Since 1985, Yang Ke has published eleven collections of poems (including Yang Ke’s Poems)as well as three collections of essaysand an anthology. His works have been included in more than 300 poetry anthologies, such as Chinese New Literature Series（1976—2000), Centennial Collection of Chinese New Poems, and University Language and Literature, and translated into English, Japanese, German, French, Korean and Indonesian. He has edited every Chinese New Poems Yearbook published between 1998 and 2014,their Ten Year Poetry Anthology, Hazy Poem Anthology (China Series fourth volume), along with many other selections of poetry.

He has delivered poetry lectures to teachers and students at a dozen colleges and universities as well as over a hundred middle and elementary schools. His poetry was presented at China Central TV’s 2008 New Year Eve’s New Poetry Reading. He was invited to participate in several International Poetry Conferences and Literary Exchanges in Germany, Japan, Australia, Finland, Norway, Philippines, Indonesia, etc. Yang Ke has won numerous literature awards in mainland China and Taiwan, including the eighth Lu Xun’s Literature Award for Guangdong Province, Top Ten in the First Chinese Poetry Bi-annual Awards (2006-2007), and the Chinese Contemporary Poetry (2000-2010) Dedication Award.

Yang Ke now lives in Guangzhou, where he serves as vice president of the Guangdong Writer’s Association and President of Literary Works, a literary magazine.

“your voice comes, separated by distant time and space”
the left hand pressing the paper, with a heart-piercing force
facing, in an instant, many a thing that can’t be recalled
such as the tone, the intonation, pauses organic and inorganic
even your heart murmurings, strong and weak
“the incurable smells, and the body odours”
the instant pain, the man writing characters hidden in the squares
whose wind may be leaked by the characters if not careful enough

putting the hand over the characters you had written
the heaven-and-earth sweeping feeling, nearly striking one down
the characters so energetic, with enough force to wound and kill
“the hand over them could gain energy”
so much so that i seemed to be hovering over a face or something else
the most enticing part of it was to smell it, and you could taste the sun
“the change in the skin of an easterner has a moving charm”

the damned mosquitoes bit the arch of my foot
“isn’t that as unbearable as licking someone’s soul?”
by accident i swallowed a chrysanthemum
so softly smooth and slippery that one “sinks” thought and “thought” sinks
thoughts that emerged on and off, like drinking muddy water
thirsty, then quenched, feeling so happy but the throat got stuck with mud
thirsty again and quenched again, life jammed between the head and the body
in the instant when hell was entered into, despair surging like first love
no one could really bear the “strike” with happiness
“it would be a luxury to die in happiness”

the south is an empty nest
and i am a lonely bird under the eaves, detached, cold
with a multiple personality, my wings used to embrace, not to fly
wind outside, occasional rain
pedlars and street-hawkers are coquetting with each other; women in full bloom in
their snail abode
on the small pretty woman’s husband’s return the owner of the household has
changed
nietzsche is dead; smell it; it smells horrific!
gauguin said what he wanted to establish was the right to do whatever he wanted to do

split a feather for me but no-one gives a damn when i am turning vulgar
reading? writing? spending days fragmentarily like chickens and dogs
like mud at the bottom of the lake, feeling myself dying inch by inch
“but on such a night can you remain on your own if not writing characters?”

many people are not as good as a bird
people, really not knowing what sort of birds

“don’t listen to me talking rubbish! i seem to be quite moody”
-moody about what? and for no reason at all

however, when i read your first letter
what you said taught my soul to fly

without evidence of your characters
the devil only knows who you are and the devil only knows what i’m doing
i do not know you but am familiar with you although i am in no position to prove your
existence
i suspect the characters you wrote may possibly have originated before the middle
ages
the assault of the memory carries with it a dizzy sensation
at one’s weakest it is easy to return to childhood
drawing up a small water curtain, in a small space
one, two, three, four, five, six, seven….
one stroke, another stroke, slobbering, being serious
time turning the other way round, like the silkworm chrysalis metamorphosing
you got two thick and long pigtails, looking at people in a strange way
and i was your neighbour, “i’ll call you big brother”
you always thought only you could call me so
the crickets around the waist sang out a summer
involving wisteria, curling and curling and curling

you made me feel pure, innocent
although i can’t return there again

sadness descends mixed with unnameable desires
smoking a cigarette and imagining, again, a woman with all colors, fragrance and
tastes
who in front of su xiaoxiao’s tomb was also a famous courtesan from some place
hundreds or thousands of years ago
and, encountering passion, accompanied her gentleman to conquer the world
shamming a fair lady, holding up one corner of her skirt, leaving behind a wind-flow
version
for me such people remain mysterious, and safe
but have an inexplicable force to wound and kill

ah, ah, maybe neither version of the fiction works
but it would be more unbearable for a man to stop imagining than to stop a woman
from looking into a mirror

maybe my body was bound by your handwriting right from the beginning
what is pliable and tough is not the language, but the binding itself

i do not know who listens to the saint’s words, who speaks unspeakably
in the dawn birds’ callings, i hear heart-throbbings

i’m no longer moved by the melody of music or the rhythm of poetry
i’m moved only by “the signifier”, my hand moistened by your lips

burning. ascending. colorful clouds falling, “kidnapped” by the angels
for a whole summer i have been flying brilliance in your bright beauty

separated by the objective world that spreads over heaven and earth
busy, from one city to another
no real foundation no real residence: status of the modern person. status of human
beings

an ant, always moving house but never seeing a home
a grain of rice on the forehead, picked up from no-one knows where

“i suspect i am only sleepwalking”
and now, you, woke me up, made me feel i am alive
i--at present--here and now

like an inky thief that has vomited ink all day
its dry belly scoured with clean water and spread, swollen up
the longest tentacle reaching your chest, adsorbing you

we have since looked down on happiness

Translated into English by Ouyang Yu

Translator’s Note:
Su Xiaoxiao: a famous Chinese courtesan in Southern Qi (479-502), whose tomb is
found in Hangzhou near West Lake.
Wind-flow: an adjective that literally means “wind-flow” but figuratively means,
according to A Chinese-English Dictionary, “distinguished and admirable,
talented in letters and unconventional in life style and dissolute and loose”.
Inky thief or wu zei: the Chinese version of the ink fish.

The workers who have to beg for wages. 148 pairs of injured hands
waving from the Daqing coal mine.
Li Aiye, who caught AIDS after giving blood.
The shepherd bachelors of the loess slopes.
Gossipy women, mouths slick with spit as they count their cash.
Hair salon girls: unlicensed sex-workers.
Peddlers engaged in a running battle warfare with city authorities.
Old bosses
in need of a sauna.
The 9 to 5 tribe off to work on their bicycles.
Good-for-nothings with no where to go and nothing to do.
The bar-room wasters. Old men
sipping tea as they pet songbirds.
Scholars who fill the heads of their listeners with fog.
Derros, punters, porters stinking to high heaven;
dandies, beggars, doctors, secretaries (and secret mistresses into the bargain);
workplace clowns
and other supporting actors.
From the Avenue of Heavenly Peace to the Guangzhou Dadao
I am yet to see 'the Chinese people' this winter;
I've seen ordinary, speaking bodies
which keep each other warm
on buses day after day.
They're like grimy coins:
those who use them hand them over frowning
to society.

This Is the Latest on Yang Ke


He eats a pepper steak in a pub
then 'grabs a cab' as they say in this town, then
wanders past stalls piled sky-high with colour.
Here in the South where night never falls
he watches money counterfeit love with strange girls—
His heart is half rotted away already.
Once in  awhile     from a jumble of ice-cold intelligent words known as poetry
he looks up
like a fly on its pile of rubbish.

Came across a Small Rice Field in Dongguan

Between the toes of factories
short-legged rice plants
clutch at the last bit of dirt
Their root-anchors
uncurl tiredly
Outraged hands     wanting to scratch
birdsong and cricket call from the mud
In a patch of gleaming sunlight
I saw rice-plant leaves
shrug like shrugged shoulders
The spikes of rice grew quickly
The grains were in milk     They smiled faintly in the summer breeze
talking to me
All of a sudden, emerging from the deafening, impulsive ocean
I wrung myself dry
like a white shirt
Yesterday, I would never have guessed
that in Dongguan
I could have come across a small field of rice
The yellow-green spikes
continued to sway
through moments both happy and sad

Translations into English by Simon Patton