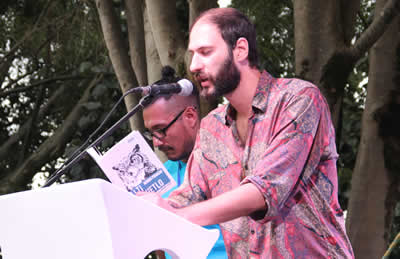 Marko Pogačar (Split, 1984) is a student of comparative literature and history at the University of Zagreb. He works as an editor for Zarez, a bi-weekly cultural magazine, and is a member of the editorial board of the literary magazine, Quorum. His poetry has been translated into several languages and he has taken part in several international poetry festivals (Slovenia, Italy and Venezuela). In his spare time he plays the drums for a post-punk band called Death Disco.

Pogačar has spontaneously discovered a poetry of everyday life in a colourful and sparkling mass of quotations and paraphrases that come welling up from the inexhaustible, permanently vibrant and stimulating cultural production whose longest branches reach all the way to the West Coast and Hollywood. In his poetry, fear, for example as “black death under the tongue”, is not a psychological definition of certain mental states and an existential categor. Far from it: it is something material, deeper and biological. In Pogačar’s case, fear is described and occasionally denoted as a dark, misty and unique sensation, as an elementary force impossible to control, which penetrates all artificial frameworks. Thus swearwords, “anti-government” songs, “commies”, and the desire to “sometimes break someone’s ass” in his poems represent a firm and, for the young generation, desirable, resistance to lyricism in an emotionally undesirable i.e. traditional sense.

The flipside of this tradition can be recognized in the use of free verse, as well as in the basic intonation of this intimate poetry, which in general takes place within a private relationship between I (he) and you (she). The need to tear the texture of poetry in order to find a new place in which to speak about experiences may be common to all of his generation, yet it is recognizable only when individualized, in Pogačar’s case — marked with a cultivated ear for what is politically and culturally tolerable or intolerable. The fact that the voice in his poetry needs to position and determine itself against the social and cultural framework as it was in Croatia in the 1990s, tells us something about the real contours of this reality, which now, in a new way, asks that anxious question of whether real change is actually possible for the new generation.

The Angel Of Artillery

I wondered how we were going to survive the night.
the ride was smooth and the anaesthetic
slowly took effect.
it was a Thursday,
somehow I felt
like Andrew. the angel of artillery
promised solitude.
never have I felt worse. trees swept by
and I thought I’d never see them again.
the conductor came in while we were still on the ground.
I looked for a restaurant, but there was none.
I made tea on the camping stove
and propped myself on my ribs. outside October quivered.
once I fell asleep on the train
and woke up in Vinkovci.
autumn was looming. hotel lobbies
and saxophone solos until midnight, and then
telephones that are slowly becoming extinct. after that silence.
the rails that set space apart and become
the passive principle of return.
I thought about bloated cows.
since by definition
I can’t stand closure.

Backyard Or The Axiom On Pain

Someone’s grilling fish.
the air sprinkled with roasted bay leaves is
sneaking into sails. no one has any intention of
sailing. in beds of parachute silk
the flesh waits for someone to flick his tongue. the one
grilling the fish must be
Toni. the deck is bursting with snails. sadness cannot stand
the shells breaking. so we cook only slugs.
sometimes we scratch
the surface with our fingernails and then until late in the night
we pick out splinters. the fortress of pain is a horse.
the purgatory of yearning is in rattlesnakes
and I don’t give a damn about
maniere. life is a dream.
ping-pong is art. if you really
want it.

A trip into the unknown is always something
that can make us happy.
Therefore it’s important to see happiness
as a phase, and the unknown as the first thing
you see around.

See something as the unknown
because what makes it
distant makes it close at the same time.

The shores from which you set sail are
a completely individual matter.
The point of departure stays unprotected by nature.
Everything we were turns into oil.
Unbutton your shirt and
take a look over the fence, jellyfish are taking
over the sea.

The unknown demands that you embrace it
as the desire to fall
or help when you need it
Your trip must become
Columbus’ revenge,
an expedition that will institute you as
a retired officer or a
chameleon between love and silence.

To The Lost Halves (A Violently Interrupted Poem)

which Ted Nugent’s high C capes into shiny emptiness. yes. that’s how it started:
a film in which a woman, a vulgarly fit young woman,

finds her lost half, yes, that’s how it started.
a street turned into Finland, the northern fleet made of paper

swallows the asphalt faster than the cracks the earth sends
from inside to make it smile, an executioner, cuts sharp replies

like fingers; the air so transparent I want to see it. absence,
the poem’s main feature, makes way for the bodies of children, who retreated

back into houses, carefully, after one call. the smell of just flushed water which,
a bellhop on cocaine, tirelessly goes up, hides, in nostrils

founds a disgustingly liberal syndicate, in the end stays calm, for a second, somewhere high,
and falls down again. absence. a triumphal vacation which you never take.

tea: crumbs dipped into teeth and the surface that stood still is on the move,
our halves find us or remain hidden. all that is real surpasses us.

voice, your own narrator, says that you are now complete
in a safe tone it moves across the canvas, like a psychoanalytic Buddha, and knows

knows that all is never lost. a rhetorical corkscrew that pierces your eyes. sucks your
brain out, that’s how it ends. all the psychoanalysts and zombies and Buddhists the moment they appear

destroy every attempt at an end. only Christians are worse. even after the Apocalypse
something happens.

Put your arms around me and I’ll let you imagine me naked.
from this day on I’m a
Judith Butler of male emancipation.
I stopped thinking because it leads nowhere. from now on I look
when looking is necessary.
if I really had to think now, it would be about God.
or, once again, about emptiness. the space between arms,
dark matter,
what’s left between the vegetables, it doesn’t matter,
the point is in no-man’s-land.
about how beautiful the hair is when it’s falling out. about the last days in May,
the space when emptiness goes black.
when you imagine me, that’s the filling up of emptiness, again.
at the key point
everything is brought down to exotic particles. minestrone. you have no clue
what’s inside, but everything works. the thing is, believe me,
in what’s in between.
well-filled emptiness is the limit of love.
the principle is webbed toes, imagine me
before I do that to you.
embrace me somehow not only with your arms. arms are rural weapons.
leave them to the Croats.
take out all the silicone and make a house from it. nail yourself to the wall
like a virtual shadow, a step forward,
into the volume of defense and time of unconditional freedom, point of clear danger.
be considerate as you’re mixing the minestrone.
let it be as thick as possible. reduce emptiness to the smallest possible measure.
even those who cower in those plants sometimes become depressed
from all that space around them.