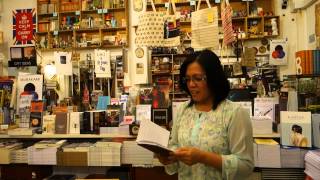 
Dinah Roma  is Professor of Literature and Creative Writing at De La Salle University, Manila where is she also Chair of its Department of Literature. She is the author of three books of poetry: A Feast of Origins (UST 2004), which won the 2004 Philippine National Book Award for Poetry in English, and two other major awards; Geographies of Light (UST 2011), whose core collection won the country’s Carlos Palanca Award for Poetry in English in 2007, was one of the finalists in the 2011 Philippine National Book Award for Poetry; and, her most recent collection Naming the Ruins  (2014) published by Vagabond Press, an Australian independent literary press, was launched in Sydney, Singapore, and Manila.

Roma’s works explore the liminal spaces between place and language, where possibilities of journeys are manifold. While her first book celebrates her beginnings in the craft of poetry, her second one pursues bolder wanderings that merge her favorite motifs of travel and its epiphanies. It draws inspiration from the rich traditions of Asia to chart the traveler’s passage across landscapes and terrains, peoples and cultures, through time and memory. Her third volume begins her on a new track as she ruminates on the guises of ruins—its internal and external landscapes—in our encounter with every day. In it she reflects on the destruction of climate change in her oft-devastated country.

Of Cyclones And Poetry

As I am writing this essay, I am also waiting for this year’s super typhoon Hagupit to make its landfall in the densely populated Manila. Thirteen months ago, I was likewise by my laptop writing my fears away as Haiyan—the deadliest typhoon ever recorded in history—destroyed areas in the Leyte-Samar islands, leveled off Tacloban City, and killed thousands of people in a few harrowing hours. In my birthplace alone—a small island called Basey (Samar)—more than 300 bodies were found dead the morning after.

The entire world looked on as the images of dead bodies and debris started surfacing on TV. Those of us in urban Manila felt helpless and angry. Our lives were never the same again.

Each year, the typhoons get more ferocious, and our archipelagic existence more at risk as we experience the deleterious effects of climate change. My relation with nature has shifted over the decades. Nature is no longer a passive entity, an idyllic tableau, to be cast into the lilt of lines in praise of its beauty. It is now an unleashed force seeking revenge for what it has been made to bear of human excesses.

As a poet of today, I sadly sing the demise of the great muses—the mountains, the oceans, the trees, the wind, the clouds, landscapes, and the people. Born on the unforgiving island of Samar—the country’s typhoon path—I know too well the ravages of water. I know too well of the bodies strewn all over the roads after the waves have washed ashore. Of families expelled from their houses.

This has been my memory, and the future that unfolds before us.

Our present journey on earth demands for a moral imperative. It is one that calls for the steadfast commitment of the sciences and the arts. Where and when the line between the two fields has been drawn, one can only argue. It may be in the hallways of the great learning institutions, where the efficacy of knowledge is adjudged numeric, verifiable.

But the crisis we are facing harks back to the time when myths and stories governed our lives, when movements in the firmament made sense through the presence of gods. It was when fear meant that we humans were culpable, accountable for our lapses and greediness. Poets recited and sang above the din of human cries. Or silence. Their words were offerings to the heavens. They brought the unspeakable to life so that it can be witnessed anew.

Martin Heidegger asserts, “To be a poet in a destitute time means: to attend, singing, to the trace of the fugitive gods. This is why the poet in the time of the world’s night utters the holy.” That the sciences—with its virtue of measurability—teeter before the massive state of the earth’s destruction indicates how the scales tip for another kind of thinking. The challenge has to be brought to an emotional frontier where we can tap again into the depths of our collective memory, mythic wisdom—and to sing earth back into plenitude. In that intuitive space from which poetry culls its power, we learn how to distil visions so we can argue in the nuanced texture of hope, empathy, and love as we convey concerns that need to be translated into action.

In the previous years, more poetry anthologies have been produced to document the ravages of the typhoons that have hit the Philippines. The poets saw themselves not as individual artists but as world citizens implicated in the catastrophes that dictate the kind of life we will be living. We found ourselves again bound by identity and community.

We need to help the earth heal and cope with its wounds. And poetry allows us to plunge into that realm where the world can be made familiar and habitable once more. With faith, it can again make our earth, our one and only inheritance, the gift that it truly is.