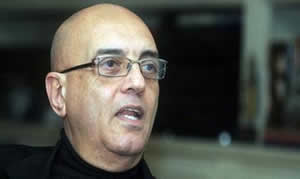 Mohamed Salmawy    was born in Egypt in 1945. He is one of the best known writers of his country. He is a novelist, playwright, editor, poet, journalist, columnist and political commentator. He is the President of the Egyptian Writers Union and Secretary General of the General Union of Arab Writers. He is the editor in chief of the newspaper Al-Ahram Hebdo. BA in English Literature from the University of Cairo.

Among his books of poems, there is Moon and Destinies, 2013. Written along 15 years, “At the end of the poems, Salmawy described his desire that the black clouds would dissipate, and Egypt would witness a new dawn. The poems in this collection express reality and the door of imagination to be opened wide”.

Among his novels, there is Butterfly Wings, published in English in 2014, but published in Arab few years before, and recognized as a prophetic novel of the Egyptian revolution in 2011. “Butterfly Wings is an extended allegory of Egypt’s modern experience of authoritarian rule and explores the fractures and challenges of a society at the moment of revolutionary transformation.

It is impossible to escape Mohamed Salmawy, president of the Egyptian Writers' Union, a fixture of Egypt's literary scene for as long as most people can remember. And while he may know just about all there is to know about book fairs -- he is as much at home on the international circuit as he is in Egypt -- he adamantly refuses to be drawn into a discussion of the 38th Cairo International Book Fair.

He deploys a friendly-but-frank approach and fixes me with an amiable gaze. For now, it seems, he would prefer to keep his thoughts on the subject to himself.

I do not press him further. He arches an eyebrow and waits in apparent anticipation for my next question. There is a certain piquancy to his large, bespectacled eyes. He is dressed in a dark pin-stripe suit and an eye-catching purple tie.

Egyptian intellectuals, writers and artists are confronted by enormous social and political challenges. How, I ask, does he think they will respond.

"The cards are all open," he shrugs, "and there is a chance now, as never before, to tinker with institutions."

For years the emergency powers assumed by the government severely restricted freedom of expression but they also, he says, provided writers with at least some protection from the ultra-conservative social setting within which they were working. The problem with Islamist extremists is that they almost never open up to new ways of thinking. They thrive on social and economic grievances and make political capital out of the escalation of those grievances. Presidential and parliamentary elections have now put the country at a crossroads, and as the events of the past few months have shown there is far more at stake for Egypt than just a political parlour game between the Muslim Brotherhood and the ruling National Democratic Party.

But does he think this new situation holds promise for the writer?

"We've been complaining for years about the state of utter stagnation. Then suddenly there are genuine changes. The changing of Article 76 was followed by the liveliest parliamentary elections we have had in years."

But Salmawy is acutely aware of popular disaffection, of the violence that marred Egypt's latest parliamentary elections. He subscribes to liberal prescriptions for change and knows from personal experience the restrictions imposed by illiberal societies on writers and free-thinking intellectuals.

The artists, intellectuals and writers of Egypt operate within the confines of a restricting triangle, he says, the three sides of which are comprised by "the state, political Islam and an illiberal conservative society".

Salmawy is a firm believer in collective and systematic liberal reform and re-education. He is also conscious of the critical role the writer can play in such a process. It is the responsibility of the writer, he says, to campaign to promote democracy, and at least try to right wrongs.

"We cannot ignore the rise of political Islam," he says. "But at the same time we cannot pretend that political Islam is necessarily conducive to democracy. Yet even the Islamists are now preaching democracy, human rights and freedom of speech. They have stuck a finger in the pie," he says nonplused.

"Writers cannot imprison themselves in an ivory tower. They shouldn't focus only on their craftsmanship," he extrapolates. "Our medium is the word. We cannot divorce literature from politics."

But he is a realistic man.

"I draw a very clear line between taking a political stand and being partisan," he says. "I cannot be a rubber-stamp for the ruling party, nor can I stand by the opposition."

The rise of the Muslim Brotherhood as a political force has serious repercussions on cultural developments in the country. The Brothers are the only organised opposition force in the country. They are the only group capable of mounting a serious challenge to the hegemony of the state and the political establishment as represented by the ruling National Democratic Party. So what does this hold for the future of Egypt?

Salmawy concedes that he is somewhat bewildered by the turn of events. "I am not sure where we are heading. As things stand they are foggy and unclear. But what is certain is that there is restlessness and a yearning for change."

It is a restlessness being felt across society, not least in the legal profession. It was, after all, the Judges' Club that made a stand against vote-rigging, and the paramount importance of an independent judiciary is increasingly understood by the public.

But everyone, argues Salmawy, has a part to play -- chief executives, judges, civil servants and national politicians. And just as, in 2005, judges were outspoken as never before, so artists and intellectuals should speak out against injustice. It is the writers' prerogative to expose corruption in high places, to advance human rights and to fight for a more fluid society.

"The parliamentary elections were impressive in so far as they represented a broadening of the representation of non-governmental political forces in parliament. The rise of the Muslim Brotherhood in the cultural arena is also impressive. I, personally, have a great deal of respect for the Brothers, but I can see a bleak few years ahead of us in the cultural arena if the Brothers' influence continues to rise. Their ascendance will inevitably lead to the curtailment of important elements of the Egyptian cultural scene, and this after a particularly disheartening year for Egyptian culture. The frightful inferno [in Beni Sweif] that claimed the lives of half of the new generation of budding theatre workers was the worst incident and it tragically demonstrated the sorry state of the cultural scene. It showed how corrupt and incompetent the cultural establishment has become. It was tragic."

Salmawy, though, is a practical man and he does not like to dwell too long on the tragedies of the past. He is at heart a professional, intelligent and energetic. "I shouldn't always be looking for the party line," he argues.

He doesn't suffer fools gladly. The interview was interrupted as one of his staff got a humiliating dressing down in my presence. The acerbity in his tone of voice and manner shed light on an entirely different aspect of his personality. But then he quickly settles down to answer more questions.

"I am rather optimistic about the future," he smiles half-heartedly, "though we have often found ourselves in a political culture that would rather prosecute than debate."

"To commemorate the 30th anniversary of the Writers' Union we organised a huge conference. We brought out a literary magazine, Daad. The opening session was held at the Arab League," he remembers. "We had to take a stand."

"Most writers in the union are against normalisation with Israel. Indeed, one member was fired for opposing this stand."

Yet despite the "long years of suppression" and of "upheavals" many people appear to suffer from amnesia. Their memories, he contends, are remarkably short. It is a positive sign, though, that "for the first time the street is very vocal."

"There is Kifaya and there is Shayfeen.com. For the first time the street has a say. Democracy doesn't come about through multi-party politics alone, and certainly not when the opposition parties lack popular appeal."

"We have had 30 years of opposition and nothing happened. One very important component was missing. Egypt had a very weak civil society," he insists.

His eloquence may belie a hard-nosed approach that has many, especially artists and intellectuals, nodding in agreement. No one, though, would deny that religion has much more clout -- a stranglehold -- over society. It rivals the power of the political establishment and very often is used for malicious political ends with the unsuspecting populace among the victims. Writers, intellectuals and artists are often in the front line when it comes to religious bigotry and intolerance.

"We are up against evil forces, forces that wielded the knife that attempted to take away Naguib Mafouz's life to silence him and still try to ban his works. Political Islam killed Farag Foda. It is the same force that attempts to silence all those who think and act differently out of their own beliefs," Salmawy angrily notes.

He has little patience for backward and archaic forms of religion. He decries the lack of enlightenment. And he is courageous enough to speak out even in these religion- bound times.

"Look at Nasr Hamed Abu-Zeid. He didn't choose to go and teach and live in exile in the Netherlands. He was forced out of the country. That is the danger of political Islam -- that it seeks to banish all those who differ with its staid doctrines."

And it is the task of the writer, he believes, to pressure the government, and everybody else, to act against restrictions.

"Everything that was tolerated in the 1960s -- films, writing, works of art -- are now subject to censorship. And, the worst form of censorship is self-censorship. We must empower new voices," he says.

Those who dare to think and act differently must be encouraged to stand up to the "religious reactionary trend".

At this point Salmawy does not mince his words. "They must stand up against unenlightened society. All our hopes are pinned on the construction and nurturing of a vibrant democracy."

He hopes that he is well placed to advance the cause of democracy. "The foundations are there. Now it is our duty to build the infrastructure of a strong civil society upon which democracy will stand. This is not a new position that I have adopted."

He believes that it was his outspokenness that prompted his fellow writers to select him as head of the Writers' Union.

"They see me through my works. And they approve. They found in me someone who was prepared to speak out against falsehoods."

Salmawy's novel Al-Kharaz Al-Molawwan (Coloured Beads), dwells in detail on the Arab-Israeli conflict, though from a personal perspective. "I've written on all sorts of political and social problems pertaining to the war years and the rise of Islamist militancy," he tells me.

"The duty of the writer," Salmawy believes, "is to stand up and stay on to continue the good fight. Writers and intellectuals must not leave the country and go into exile in Europe or America."

A certain impetuous streak may have cost Salmawy much but he is a survivor. His apparent recklessness has surfaced often, landed him in trouble occasionally, but then in the end he triumphs. He makes the most of opportunities, both good and bad.

"I've stayed. I try to change the course of events. I could easily have sought a career abroad and have turned down many chances to work outside Egypt. I have paid dearly for my stands, have been fired from jobs many times, and put in prison, but I am staying the course."