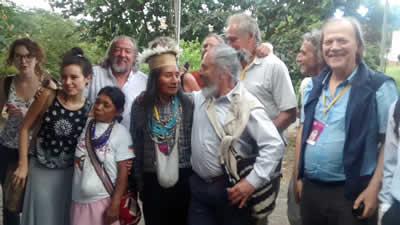 Dear translators and actors who read our poems,

It was one month ago that the 26th World Poetry Festival had started for all of us with that amazing crowd at the opening.

There followed an intense week with all of us going to different places, thereby getting to know Medellin and other location. Poetry on the move, or rather it reflected what the city has done in terms of culture to bring about a peaceful co-existence.

Today I read the following news item of an art organisation called INTERARTS with main office in Barcelona. They reported that

It says something about Medellin having put itself on the map of being a sustainable city. An architectural friend of mine mentioned as well the cable car which takes you outside the city and right into nature. And it gives access to those urban areas where the under privileged live.

There are so many other impressions like those of the parrots which gathered near the hotel where we stayed in the same tree at six o'clock to chat away, drowning out so to speak the noise of the passing traffic.

We had wonderful conversations when eating breakfast, lunch or dinner even though I heard some did not approve of the cook's way of preparing food while others loved him for that. Well, some of us did have difficulties with digestion but the week went by so lovely because we all felt taken care of by an amazing organisation which Fernando and Gloria have set up. The most amazing thing for me was that I never heard a harsh word, or an angry shout. There was always a peaceful calmness in how matters were dealt with.

For me the greatest experience was the Wednesday reading when we had to compete with the football match Colombia against Chile. Thanks to rain that game was interrupted but we were already amazed by the crowd which had gathered. Krystyna Dabrowska thanked them for having chosen poetry over football. After she had said that, the crowd broke out in both laughter and enthusiastic applause. And then we went on with the readings of our poems. Afterwards I thought it had not gone down so well, but to my surprise many came up to us and made us feel like movie stars since they asked to sign the page where was our photo and some samples of our poems. Suddenly I felt to be no longer with my consciousness in Europe, but in Colombia, in midst another field of human streams. Afterwards I saw my poems becoming birds who lifted off into the evening sky hovering over Medellin.

I am indebted for having given my poems a voice. It was a discovery of them by having them read in another language. For those who might be interested you find them either attached or else in the documentation I am slowly preparing. I call it memory work since there are so many valuable bits and pieces which can become a powerful mosaic of a new poetic expression.

The documentation (not complete) you find here.

My thanks goes out to Fernando and Gloria, to the entire people and to those whom we met as a result of the festival. These are lasting memories. We were there when the partical peace treaty was signed on June 23. As Fernando put it in his closing statement, it is time that sixty years of war end.

We all face difficult times, here Nice, there Turkey and last the axe and knife attack of a seventeen year old Afghanistan in a regional train in Southern Germany. The killing of innocent people means many no longer think life is sacred enough nor that the hardest but then most fulfilling way is the non violent one. I wish that in Libya, for example, the smell of the sea returns and therefore drives out the smell of blood.

In that spirit we know more than poetry is needed to rectify our peace efforts, but it is a tremendous start with Medellin given such a huge example.

With warmest regards to all, and again my deepest thanks as well,

1. On 22 June, Interarts and BOZAR launched the first expert seminar of Culture and arts supporting social cohesion in Latin American cities - LAIC, a project funded by the European Commission and running until July 2017. Followed by a public debate, the seminar brought together more than 20 researchers, cultural managers, cultural directors and architects from Latin America and Europe, offering an opportunity to make comparisons between contexts whilst also highlighting contemporary challenges related to cities, cultural cooperation and the identification of best practices in both continents. For the latter, Medellin in Colombia is often quoted as a new model for urban development and culture, in spite of a complicated past, proving that the relation between cities and culture remains a key challenge for numerous decision-makers, artists and cultural operators across the globe. The LAIC project aims at facilitating exchange and joint action and supporting peer learning on the linkages between culture and development for Latin American artists and cultural operators, as well as triggering joint dialogue with their European counterparts. The project should create opportunities for Latin American creators, especially those from Lima (Peru), San Salvador (El Salvador), Curitiba (Brazil), Medellin (Colombia) and Puebla (Mexico), to work and implement projects in the field of culture and urban social cohesion. The next activity will be a workshop organised in Medellin later this year. In 2017, an exhibition at BOZAR will showcase several arts-driven initiatives in Latin America focusing on social cohesion and urban development.