Back to Eleusis: An Interview With Carl Ruck 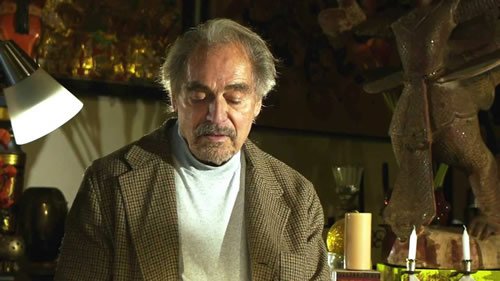 Psychoactive sacraments have helped us experience the divine since the first stirrings of religion at the dawn of human consciousness.

They were involved at the “very origin of humankind’s religious cognition, the awareness that there was a spiritual dimension to our existence,” Professor Carl A.P. Ruck said in a recent telephone interview from Boston University, where he teaches Classical Greek and Latin language and culture.

This is not something contemporary religions gracefully accept; they tend to see it the way a politician might view relinquishing power. Also, psychoactive plants, magic mushrooms and other archaic ethno-botanical potions are not only mostly unlawful in our time, they are still tarnished by memories of the ‘60s and the chaos of that tumultuous period. Merely uttering the word psychedelic can create a wave of panic among stakeholders in the social and political status quo.
This unfortunate attitude may be changing. Ruck, a Harvard Ph.D. in classical philology and author of many books concerning mystery cults of the ancient world, has even coined a new word—entheogen—to “free the topic from the pejorative connotations for words like drug or hallucinogen,” according to his website. The new word is rooted in Greek and means something like “God-manifesting substance.”

Through research in linguistics, history and written sources of classical languages, Ruck also came to a conclusion that the primary spiritual ritual of ancient Greece, the Mysteries of Eleusis that were celebrated for more than a thousand years in that small town outside Athens, were initiated through the consumption of an entheogen, perhaps derived from barley fungus. Along with Albert Hofmann, the chemist who discovered LSD, and R. Gordon Wasson, a former J.P. Morgan investment banker whose study of ethnomycology led to a pioneering 1957 Life magazine article on the religious use of psychoactive mushrooms by the Mazatec people of Mexico, Ruck co-authored The Road to Eleusis: Unveiling the Secret of the Mysteries.

That book contains a 2nd-century quote from Aristides the Rhetor which, although the Mysteries were kept secret, offers a glimpse behind the veil:

Eleusis is a shrine common to the whole earth, and of all the divine things which exist among men, it is both the most awesome and the most luminous. (Wasson, Hofmann & Ruck, 27)

Ruck is honoring these words in helping promote the Gaia Project an initiative to enhance the neglected archaeological site of Eleusis by adding it to the World Heritage List of UNESCO and building a new museum. The project’s website notes Cicero credited “the ancient Mystery enacted at Eleusis as the essential impetus for the evolution of humankind’s rise from savagery to civilized modes of life.”

Ruck concurs. “The evidence is quite clear,” he said. “It makes you live with more hope and die a better death. The motif is that you die and are then reborn.” This, in keeping with the myth of Persephone’s return from Hades and the resurrection of life in spring. “As a psychological event it was an ego death.” What happens, he said, is that “you see a deity face-to-face.”

The source of the mysteries is what Ruck refers to as the empyrean, “a deity beyond deity, it is the reservoir of every life that has ever been lived, the home of all souls that ever were incarnated, and if you believe in incarnation, the fire descends from the empyrean into the individual entrapment of matter and then when you die it goes back to that reservoir.” It is similar to the unio mystica referred to by Hofmann in their book, (ibid, 147) in which the individual finds a “healing experience of totality.”

Hofmann also noted that while Christian liturgy worships a god enthroned in heaven, at Eleusis the emphasis was on a transformation of the individual, “a visionary experience of the ground of being” that converted the subjects into mystical initiates. (ibid, 148)

In the 4th century, after Christianity had been adopted by Constantine as the religion of the Roman Empire, the sanctuaries at Eleusis were decreed closed by Emperor Theodosius I. “There could be only one deity,” Ruck said, “If you’re going to have an empire, it is very beneficial to have one deity, and that one deity empowers the one emperor, so it was largely political.”

During this period, Christians often desecrated the older sanctuaries, implanting churches atop the sacred places and “incorporating bits of the old buildings into the new structures,” Ruck said. He added that the Eleusinian Mysteries were also antithetical to Christianity in that it was a patriarchal religion, while the shrine at Eleusis was “devoted to the female,” the mother of the earth.

Lost in this shuffle of state religions was the direct connection with the divine, the empyrean, the unio mystica or the collective unconscious--call it what you will--that for millennia had been enabled by shaman, priests and initiates of mystery rites throughout the ancient world, Eleusis being the most famous and notable.

Today, that connection may have begun reestablishing itself as major universities carry out sanctioned research on entheogens in treating end-of-life anxieties and post-traumatic stress. Some religious organizations, including the Native American Church and Santo Daime--transplanted to Oregon from Brazilian rainforests--have won legal decisions allowing them to use entheogens to bring their ceremonies to life. This organization, ERIE has been granted official non-profit status in its mission of Entheogenic Research, Integration and Education. “It’s great,” Ruck said. “From the very beginning, Hofmann thought LSD would be useful in psychotherapy and to ease the trauma of the final transition into death.”

The entheogenic experience is still rare. “We’re very busy in our world and we live without it,” Ruck said, “but in psychotherapy it offers a quicker way into the structure of the psyche.” He’s also worked with the people “who’ve established churches that are aware entheogens are a pathway to spiritual development.”

Still, it is strong medicine, deserving of the utmost respect because “some people can’t handle the experience, and it’s also dangerous because people want to know what the experience means, and if we provide them with a scenario we’re apt to be setting up a religion,” Ruck said. Pitfalls remain, as the chaos of the ‘60s illustrated.

“The psychedelic revolution coincided with a disastrous period politically. We were involved in the Vietnam War, which was a great mistake, and it allowed people to realize that maybe their government was doing something wrong, so it was seen as counter-cultural” and even harmful to the structures of society, Ruck said, adding that it doesn’t have to be that way. As we see in antiquity, “In a society where the entheogen has its proper role, it doesn’t destroy the establishment, it reinforces confidence in it.” As they were used in the ancient world, at Eleusis, entheogens “reaffirmed what the society thought about the spiritual dimension.”

It may be helpful to consider the possibilities evoked by Hofmann’s final words from The Road to Eleusis:

“Eleusis can be a model for today. Eleusis-like centers could unite and
strengthen the many spiritual currents of our time, all of which have
the same goal—the goal of creating, by transforming consciousness in
individual people, the conditions for a better world, a world without
war and without environmental damage, a world of happy people.”
(ibid, 148-49).