Poetry: Carrier of Light and Insight 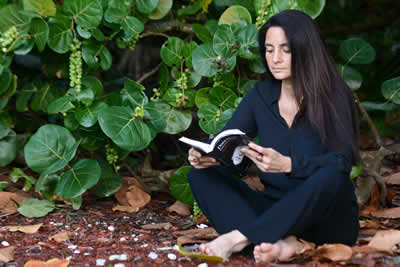 Poetry is a weapon of the soul, the sharpest one. It aims from the center of Inner Truth to destroy its lethal enemies: injustice and delusion, both derivatives of Hate as well as cause of pain and suffering for mankind, for other living beings, and for the planet as a whole. Poetry is a defense weapon, to hold in place the symmetry of Creation.

War is born in the crib of injustice and misperception, and grows when fed by Hate. War is both offspring and parent of injustice. It’s a ruthless and violent enemy of Justice and Peace, yet it often arises from a deep yearning for them.

Since the origins of mankind, War and Poetry have coexisted: the latter narrating or denouncing the former; the former providing inspiration for the latter.

The world’s most ancient epic, the “Mahabharata”, describes in detail the spiritual battlefield of Mankind, in which war is necessary to attain peace. And it is God himself, in the form of Krishna, who leads the chosen warrior to victory. Homer’s “Iliad” is another example. Whether the Trojan War really took place or not, Homer’s verses shed light on Man’s desire for power; on blind revenge and ensuing bloodshed.

These myths look to the heart of the issue: the presence of both good and evil in every individual, where shrewdness is neither more nor less harmful than gullibility, and Man’s corruptible nature shovels Man’s own grave.
History, being the written testimony of continuous struggles between groups of individuals, is the epitome of such myths. It records, more or less objectively, the rise and fall of civilizations, the shifts of power from one bearer to another, thus building collective memory.

On the other hand, poets –those useless individuals that found no standing in Plato’s Republic– have kept passionate intimate accounts of the atrocities that Man has inflicted upon Man. Many have raised their Word against Evil, as singular expression of a higher conscience. Numerous are the examples of poets who have paid for this inner call with incarceration or even their lives: neither torture nor death can override truth.

Naturally, those who illegitimately hold power feel threatened by truth and persistently try to silence poets when they reveal truths that can become a tool useful to the oppressed. But despite such attacks, Poetry survives and carries light and insight through time. Fresh in me are the echoes of many poets of the past, such as Anna Akhmatova and Ossip Mandelstam, Federico García Lorca and Miguel Hernández, the voices of young guerrilla poets who died in combat, as well as the testimony of War Poets like Giuseppe Ungaretti, Robert Graves and Wilfred Owen, men wounded yet illuminated by pain, all the more aware of the precariousness of the human condition.

Poetry pinpoints the fundamentals of the human condition as it reaches farther, into the Unknown. Poetry is, in fact, the Unknown’s mysterious incarnation; that of the ultimate truth: Love. Love, which moves the sun and the other stars, said Dante. Love, the antipode of Hate, breeder of War and of human blindness. Poetry urges man to look for that broader truth, to unveil the true perception of the universe. As it unveils perception, man can recognize evil and appropriately deal with it.
It may be daring to affirm that Poetry can stop War, especially because it never has. But it is not far-fetched to say that Poetry can open new horizons within us, making us more mindful, and that the sum of mindful individuals, can create collective consciousness.

Let us borrow the words of Jesuit phliosopher and paleontologyst Pierre Teilhard de Chardin who, himself, experienced the battlefields of World War I:

… At present most men still merely understand Strength… in its most primitive and savage form of War… But let the time come, as come it will, when the masses will realize that the true human successes are those which triumph over the mysteries of Matter and of Life… (from “Building the Earth”)

… One could say that the whole of life lies in Seeing — if not ultimately, at least essentially. To be more is to be more united… But unity grows only if it is supported by an increase of consciousness, of vision. That is probably why the history of the living world can be reduced to the elaboration of ever more perfect eyes at the heart of a cosmos where it is always possible to discern more. Are not the perfection of an animal and the supremacy of the thinking being measured by the penetration and power of synthesis of their glance? To try to see more and to see better is not, therefore, just a fantasy, curiosity, or a luxury. See or perish. This is the situation imposed on every element of the universe by the mysterious gift of existence. And thus, to a higher degree, this is the human condition… (from “The Human Phenomenon”).

We live in an era of contradiction, ruled by the ruthlessness of nonsense and individualism (the destruction of natural resources being the most blatant example), yet people are all the more desperately seeking Love. War is everywhere because hate is everywhere: in the streets, in the Stock Markets, in the Internet, in the unspoken. Love, instead, dwells in compassion and truth.

Many say that Poetry is dead, that it has no role in contemporary society. Others see it as a literary genre for personal enjoyment. Others yet, claim that it can be a peace building instrument, a voice to reach out and reconcile conflicting parties. The latter is possible only if Poetry is free of political rhetoric and dogma. Elements, these, that deepen ruts and sharpen discords.

Mystical Poets of all times have pointed out that the way to Peace is “going towards the other”. Buddhist monk and peace activist Thich Nhat Hanh says in his book “Being Peace”: for things to reveal themselves to us, we need to be ready to abandon our views about them. Khalil Gibran’s Prophet, when speaking of freedom, asserts: if it is a despot you would dethrone, see first that his throne erected within you is destroyed… And if it is a fear you would dispel, the seat of that fear is in your heart and not in the hand of the feared. And in Jalaluddin Rumi’s view: Why struggle to open a door between us when the whole wall is an illusion?... Love is the bridge between you and everything.

Doctor in Economics, Zingonia Zingone (1971) is an Italian poet, novelist and translator writing in Spanish, Italian and French. She lives between Italy and Costa Rica. Her books are published in Spain, México, Costa Rica, Italy, India and France. Her most recent poetry titles are Los Naufragios del Desierto (Vaso Roto, 2013, Edizioni della Meridiana 2015), Petit Cahier du Grand Mirage (Éditions de la Margeride, 2016) and Light, the Temptation (Paperwall Media and Publishing, 2016). She keeps a monthly review of International Poetry for the Italian magazine MINERVA. Among her translation works is the Italian version of Claribel Alegría’s most recent book, Voci (Samuele Ediotore, 2015), winner of the XXIII Edition of the Camaiore International Poetry Award (Italy, September 2016). Founder of the FreeFromChains Poetry Movement in a Roman prison reserved for men.