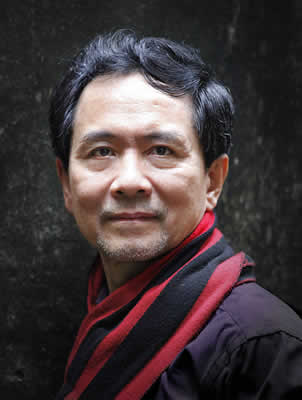 Poetry is space, is the extremely beautiful world envisioned only by the poet who transmits it by means of language. That world has the power to radiate, take hold of the hearts and minds of readers. To awaken their common sense, their conscience, and their innate faculty. Even to transform the public from being cold, bluntly insensitive into people capable of loving and desiring Beauty. Then, they know how to act, and dare sacrificing themselves on behalf of noble things for an equal and charitable society, a world of peace and liberty.

So how does the poet envision, and what does the poet see in that world? Poets are used to note down the mutations occurring in repression, the mental states to be confided, the aspiration for transcendence… sometimes that mutation takes place in inner space, or may be through some concrete phenomenon of life. It is that mutation which opens the poet’s soul into the world of the community.

The world of poetry often starts from simple, sometimes very tiny things. Like a tree sprout, a breath, a drop of water, a hair, an insect…. The poet embraces those tiny things with a benevolent, charitable, tolerant heart for the sake of humanity. Those breeds and seeds are sowed on the poet’s field of language. They multiply by themselves into a private world in the hearts of readers, by accident and unconsciously. That poetic world always illuminates, haunts the readers through out the stages of life, enables them to know how to think and act on behalf of noble, good things. It is at the same time the barriers preventing people to cross the boundary between good and evil, conscience and sin…

Each poem is a particular definition of poetry, a one-way road to beauty. After being accepted by readers, that poem imprints itself deeply in the mental luggage and property. That poetic beauty carries a special power and light. Poetry connects soul to soul, is the sympathy and harmony that lead people of the same aspiration towards light, help them overcome obstacles, and survive the vicissitudes of history. Poetry is usually profound and tender as the breath of a mother, a lover. Sometimes, only as transient as a thin perfume, a sunset ray of light, a distant bird… But those very fragility and tenderness have the great power of awaking humaneness, accomplishing human personality and dignity. For example, a cloud lifting through the following poem by Russian-born poet Joseph Brodsky (1940 – 1996) has brought many readers from all nations, belonging to different geo-politics, to raise their eyes with the author to listen to a rhythm of aspiration for life, for liberty, and for peace on earth:

In the existing world, the struggle between good and evil, democracy and dictatorship, liberty and loss of liberty… still takes place everywhere, on the hot points on earth. Humankind’s problems such as racial segregation, religions and racial discrimination, competition for land and natural resources, conquest of maritime territories and islands, occupation of space… then, atrocious wars and terrorism with all barbarous maneuvers are heart-rending everyday occurrences on all continents. Irresponsible acts of people, such as the destruction of nature, the demolition of living environment, the breakdown of ecological balance are the concerns of all humankind. More than any other time, now is the moment poets have to act to attain the new goals of creation. Poets have to rebuild the world with the beauty and power of poetry. To select the most beautiful and essential features to create a world of perfect beauty without crime, without sorrow. That world is fragile, splendid, and hopeful, but no less powerful, characteristic, and resolute.

Our experience in the nation-building and nation-defending struggle of Vietnam through ages has shown that literature in general, and poetry in particular, are the great sources of motivation, the sharp weapons to resist foreign invasion. It is the strength of national unification of all people to build up a life of plenty and happiness. The anonymous poem “The Mountains and Rivers of the Southern Nation” is presumed to belong to Divinity and to be proclaimed by Divinity on behalf of Lê Hoàn (*) in the resistance against the Sung Dynasty troops of China in 981 and on behalf of Lí Thường Kiệt (**) also against them in 1077. Our people consider that poem as the first Declaration of Independence of Vietnam. The poem is as follows

The Southern country's mountain and river the Southern Emperor inhabits.
The separation is natural and allotted in Heaven's Book.
If the bandits come to trespass it,
You shall, in doing that, see yourselves to be handed with failure and shame!
(Source: Wikipedia)

The poem “The Mountains and Rivers of the Southern Nation” has forged the will of steel, and built a firm fortress in the heart of every Vietnamese person. Our people has fought and won over many foreign enemies with the will and patriotism toughened through this poem. That is a proof of the power and strength of poetry which has helped us protect the independence and sovereignty and the integrity of the territory until the present day.

The story about the world has changed nowadays. Many hot and urgent problems are happening every day before the eyes of humankind. Like some national boundaries are redrawn by blood. The “Arab Spring Movement” has pushed the Middle East and Northern Afria deeper into conflict, causing violence to spread to Europe. The appearance of the self-proclaimed Islamic State (IS), an international organism of terrorism, is the calamity of the entire world. The waves of migrants and refugees are overwhelming Europe from the regions of war and conflict. Climate and environment change has influenced many nations, including our Vietnam. The Earth’s resources are gradually in exhaustion. the issues of epidemics and health are rampant in developing countries. The explosive development of China’s and India’s economies of extreme growth, for example, has multiplied super-metropolises. According to The Far-Eastern Economic Review, until 2025 Asia alone has at least 10 super-metropolises with Mumbai (33 million inhabitants), Shanghai (27 millions), Karachi of Pakistan (26.6 millions), Dhaka of Bangladesh (26 millions), and Jakarta of Indonesia (24.9 millions)… In many developing countries, densely-populated slums has the highest proportions of diseases due to low hygienic conditions, malnutrition, and the shortage of health services. It is estimated that by 2030 there will be over two billion people living in those slums. Globalization has changed all societies and economies of the world, but the reverse side of it bears “an ugly, horrible face” as observed by the economist Joseph E. Stiglitz. The action program of the United Nations Agenda for 2030 is called The Global Goals for the purpose of increasing sustainable development, equality between nations, decrease of arms race and the use of nuclear weapons, the eradication of hunger and poverty, health and nice living conditions, quality education, gender equality, clean water and hygienic conditions, the response to climate change, peace and justice…

Ladies and gentlemen and fellow poets! I am enthusiastic with the subjects proposed by the 26th Medellin International Poetry Festival, among which “Poetry – Peace – Reconciliation” is an urgent issue certainly concerned by everybody. Poets and poetry-lovers are gathering here to take recognition of the problems of humankind and express their points of view on creation with arguments, orientations, and with each poet’s very work. Poetry, in my opinion, besides the beauty born since early times of humanity and ever afterwards, also bears a message of power and strength of the soul. In this moment, each poet’s work should wage a direct struggle with the evil, ugliness, and cruelty generated by humans. Poetry like a scalpel has to penetrate into all necrotic tissues, detach dead cells to heal the wounds on each organism. The “necrotic” tissues in human soul are truly the dark schemes causing crimes against humanity, causing racial and religious discrimination to kindle atrocious and destructive wars. The “necrotic” tissues in the soul is the evil, the ugliness, the vices that alienate and dehumanize people, transforming a section of persons into beasts among the community of humans…

The world will be redrawn after the way envisioned by the poets. We needs the works directly struggling with evil, ugliness, sin to reconcile discords and bring peace to all nations. Poets, in my opinion, are simultaneously the architects to build up society and regime. We have the right to set forth social models designed after the views of life of poets. The organization and operation of these “models” may be still not rational, even irrational, but from that the beauty and power of poetry will radiate by itself the lights, opening the way for policy planners in politics, economics, and foreign relations to help them see the future more clearly and understand the dangers for humankind. Literature, especially poetry, always carries the ability of prediction, of foresight.

Each poet is a private world of particular poetry. That is the characteristic and style of creation. But we have the same goal to Truth – Goodness – Beauty. The solidarity and creative assembly of poets on behalf of peace and reconciliation of the world is a work of gathering many drops into a shower, of lights among lights, of many rivers running into the vast ocean… it has been the dream of humankind since olden times until now and ever afterwards. By talents and inner energy of creativity each poet ought to redraw the world after their own view. That is the way we let the light of our soul radiate, so that the aspiration for peace and reconciliation becomes reality everywhere on earth.