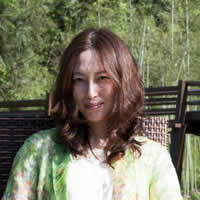 Mei Er, pseudonym of Gao Shangmei, was born in Huai'an City of Jiansu Province (China). She currently lives in Beijing and is Director of the Poetry Magazine Autumn Water, in Taiwan Province. From the year 1986, Mei Er began to publish poems. Her works were collected in several magazines such as Revista de Poesia or in other collections of poems. Mei Er's poems demonstrate a particular point of view and are full of passion and strength, which is why readers often forget their feminine identity. Her effort and search have brought her unexpected successes in the circle of poetry.

Up to this moment, she has published the poetry books The Sponge’s Weight, 2013; and, You and Me, 2014... The Sponge’s Weight achieved very positive reviews once it was presented to the public. In 2012, Mei Er was named by Young Contemporary Magazine as "ten young poets most favorite for readers"; In 2014 was enlisted by the Magazine of poets among "Ten female poets" of that year and the World Academy of Arts and Culture also granted her the title of Doctor of Letters; In 2015 Mei Er won the Poetic Creation Prize at the World Poets Congress held in Taiwan Province where she received the Medal of Art and Culture in the 57th edition in 2016.