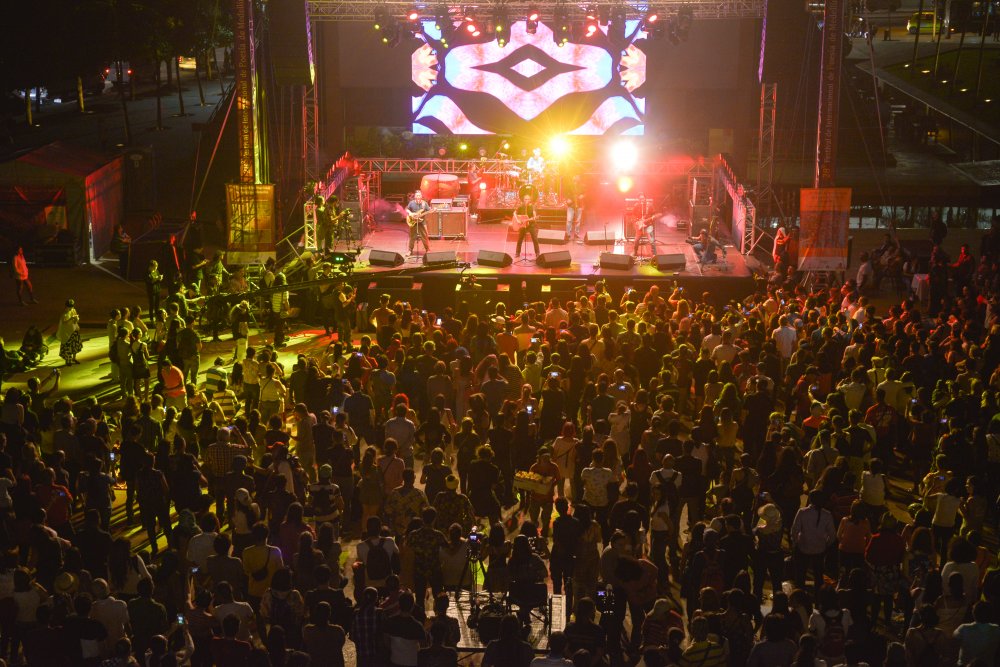 The 28th International Poetry Festival of Medellín continues its process of vital construction in support of the profound peace and reconciliation of the Colombian people, after the long war in our homeland, inviting the people of Medellin to raise awareness in the spirit of dialogue, the loving care of the earth and life, a legacy that we must deliver in splendor to future generations.

This new edition will be held between July 14th and 21st, 2018, through 152 activities displayed by poets, artists and shamans from almost 40 countries, including representatives of 19 original nations from all continents through poetry readings and stories, rituals and ancestral shamanic songs, ancient Asian and Australian songs, concerts, dialogues about sacred and medicinal plants of indigenous peoples, courses, conferences and workshops for children and young people.

The Festival proposes the poetic exercise on a large scale in Medellín and the detained reflection on poetry, shamanism and the original songs of the Earth. The shamans embody with great energy the living traditions of their peoples, intertwined with struggles for the defense of their unity, their territories, their ancient cultures and the material and spiritual autonomy of their nations.

The Festival encourages the Colombian people to delve into their pre-Hispanic roots and to nourish themselves in the crucial present of their tortuous history, in opposition to the devastation of nature, of existence and spirituality, to return to community life along the way of poetry guided by the thirst for infinite solidarity, dignity and beauty.

The work of the shaman, an authentic poet in his origin, is to dissolve what has died in each one of them and in the community, to transmit the path of rebirth and renew without end. The ritual energy approximates the individual wills, in the search for a shared sense of material, cultural and spiritual construction. Thus, the myth and the utopia meet and act together, concentrating spiritual and poetic energies in Medellín. It is necessary to rethink the sense of "innovation", to put aside the consumer drive that promotes the extermination of living species and peoples.

The original shamans and poets invited will contribute from three areas: first, from their traditions, they will perform ceremonies in tutelary hills and other spaces of Medellín, ritual acts as a community pedagogy against the inoculated poison of hatred in our society, stoking the fire of the brotherhood and the embrace of the population.

Dialogues of the Earth

The Dialogues of the Earth are another vertex of their participation in which they will recall their struggles to preserve unity, their languages ​​and territories, and for restoring their autonomy. In these events will participate Aiba Eiragi (Guaraní Nation, Paraguay), the Alternative Nobel Prize winner Nnimmo Bassey, Nigerian poet and activist, defender of human rights and the environment, co-founder of the Health of Mother Earth Foundation (HOMEF); and also, Nobel Prize laureates Jumanda Gakelebone, spokesman and defender of the Bushman indigenous people (Botswana), and Fiore Longo, director of the French office of Survival International.

Healing and poetizing is the third aspect of shamanic participation, with the celebration of the dialogue on ancestral medicine and alternative medicine, in which ancestral knowledge will be exchanged with representatives of non-orthodox medicine, highlighting the importance of songs, the sacred language and the healing plants.

An important element within this poetic celebration will be the musical interventions. Among the guest musicians we will count on the presence of the rock group Su Yang from the People's Republic of China that fuses traditional sounds of folk art from northwest China with the traditional folk opera -Hua'er and Qin. His Yang, director and composer of this group, is also a poet and artist. The Chinese representation is also composed of the great poet Zhao Lihong, with them will come to our country a delegation of Chinese state television -CCTV-, which will make a full coverage of the participation of Su Yang, which is supported by the Regional Center of Institutes Confucius in Latin America -Crical- and the Confucius Institute of Medellín.

It is also confirmed the presence of the greatest traditional singer of Mongolia, Dorjdagva, versed in musical technique and throat singing and long song. The virtuoso of the song of throat Sainkho Namtchylak, of Tuva, will intervene in the Festival mixing the Siberian vocal tradition with the sounds and the western experimentation. Also present will be the Vietnamese traditional music singer Huỳnh Thị Quỳnh Hoa. From Africa will be Stella Chiweshe, the greatest exponent of Zimbabwe's mbira music. For Colombia, the singer Íkaro Valderrama, Jaime Nevado and Julián Conrado will speak, with Ismael & Manceñ. The poet and performer Khadijatou Doyneh (Guyana). The poet and performer Khadijatou Doyneh (Guyana) will also be present in Medellín.

The entities that support the Festival this year are the Mayor's Office of Medellin, the Right Livelihood Foundation, the Regional Center of the Confucius Institute in Latin America -CRICAL-, the Ministry of Culture of Colombia, Lantern Film (People's Republic of China), Comfama, Confiar Cooperativa Financiera and Heinrich Boll Colombia Foundation.

Folder for journalists in Dropbox: http://bit.ly/2suiehj