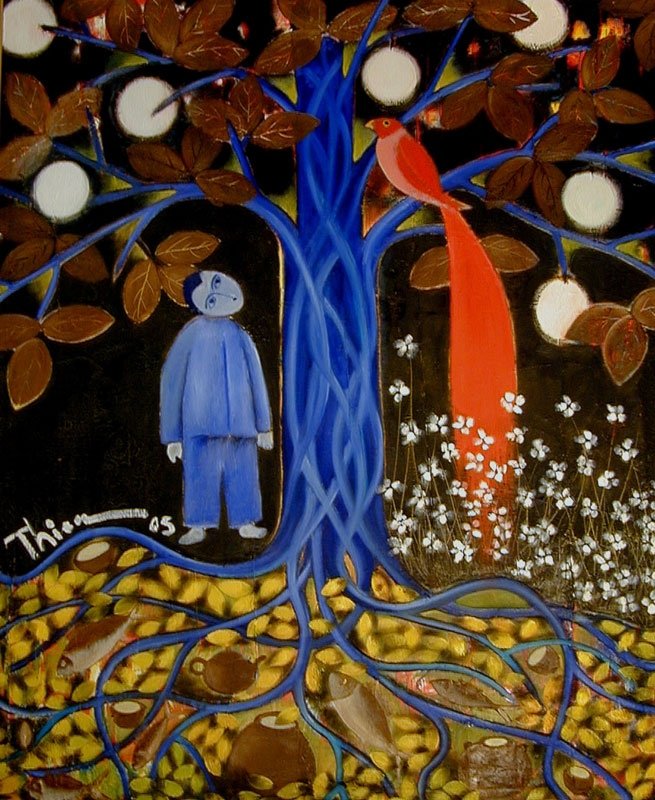 A boy of Chua village. Paint by the Vietnamese poet and artist Nguyễn Quang Thiều

From June 29 to July 6 of this year, the poets’ voice of the peoples all around the world joined back. Through the poetic word, arts and thought that reflect on the issues of our times, we continued with the purpose of performing poetic and artistic actions to encourage the free expression of communities with which the Festival intervened through 120 acts with the presence and participation of poets from 35 countries of the five continents which flowed as the flourishing power of the new spirit offered by the universal language of poetry.

It consisted of a massive deployment of poetry readings, courses, workshops, panels, conferences and colloquiums which summoned the population.

It was about erecting our voices and our will as a way of bringing complete emancipation as the charming emblem of love for the living in the harsh times that demand urgent changes at all levels in our behavior as a species.

The 29th International Poetry Festival of Medellín brought about -from the heart of communities-  the poetic essence that makes possible the great leap to a reconciled society of dialogue.

Peace and sovereignty of peoples have a powerful and significant impact, especially that year, 2019, when the bicentenary of "independence" was historically commemorated, although, for its meaning, we should rename it as the bicentenary of resistance due to the struggle of Latin American peoples, particularly the struggle of Colombians, for the emancipation (not yet attained).

The first independence of Colombia shed much light on the way forward during the anticolonial and emancipatory struggles, but its libertarian course was distorted and diverted into the dark pit of a history of fratricide that weakened us and subjected us to new oppressive, alienating and unjust yokes.

The nature of the Festival was its symbiosis with the collective soul which becomed more substantial in that historical moment, a propitious time in which as a group, all inhabitants of the communities, community leaders, youth networks, social network organizers,  indigenous communities, Afro-descendants, children, and young people should were able to unite their strength,  mobilize themselves  and  feed the fire of renewal that fosters a spiritual atmosphere linked to the transformation of a  culture, fractured by violence, but in a prosperous community framework, plenty of human qualities allied to the flowering of life, just there where it has been denied.

From this perspective, in addition to the emblem: "From the heart of the communities, For Peace and Sovereignty of the Peoples” -which guided the actions of the twenty-ninth Festival-, the activities that were programmed mobilized contents based on fundamental and significant aspects.

Poets from all continents and some poets from indigenous peoples who have struggled for the rights of their communities and their sovereignty were with us in all scenarios where the Festival took place.

Within the 120 scheduled events, there were 32 training activities among courses, workshops, symposia, panels and conferences which enriched, with their contents, the thematic aspects of the Festival in the context of the 23rd International School of Poetry of Medellín, its formative component.

It was very stimulating being witnesses of an effervescence such as those poetic actions performed by groups of poets, poetic projects and poetry festivals that grow organically and in a committed manner, based on a common cause all over the planet by radiating its influences grounded in an awareness of urgent changes in order to stop this delirious race of destruction and social injustice all over the world.

The International Poetry Festival of Medellín, as the center of convergence for poets all around the world, is a vital part of the World Poetry Movement -WPM-, founded in Medellín in 2011 during the twenty-first International Poetry Festival of Medellín.  During the month of February of 2019, it mobilized poets from 151 countries thereby making presence in 420 cities of the world with more than a thousand poetry readings in the context of the global campaign: "For a world without walls".

This overflowing response through public interventions for a world free of chains, against the walls, and border walls of discord amongst the people, and against the invisible walls that deepen social distrust, was a very remarkable indicator of how poetic actions are increasingly necessary in terms of a world poetry revolution that is under way and that makes possible an awakening, a new consciousness that allows the representatives of power controlling the world to understand the urgency to stop the vector of destruction and war to which seems we are doomed.

This global plan of action in favor of life and peace consolidates a hopeful path about which the great French poet René Char, the victorious fighter in defense of the sovereignty of his people during the Second World War, in resistance to Nazism, he said: "Hope is truly the only active language and the only illusion that can be transformed into a good movement. We, men, poets, we have to ensure that this hope is not candor, there could be no poetry or life without hope- poetry: extreme hope, existence: relative hope."

In this perspective, this call was an invitation to take an active part in the 29th International Poetry Festival of Medellín, which increased its poetic actions to protect life and peace in Colombia and all around the world, inviting the subjugated peoples of the planet to rescue its sovereignty from the heart of the communities.