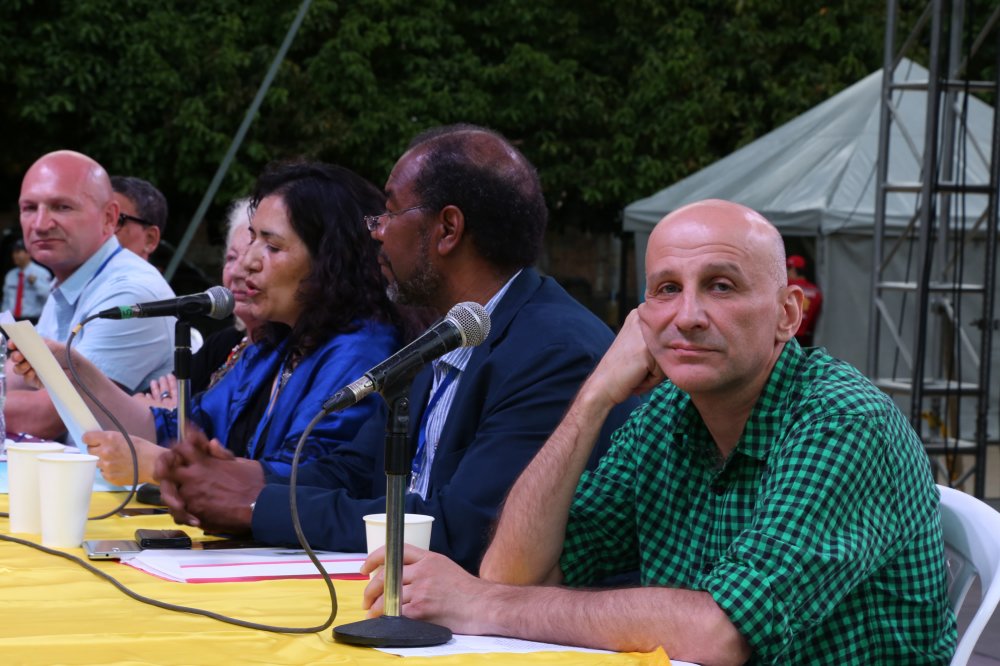 And the wind was blowing

The slim spring dress
around your body
amazes me
as if your soul was wrapped
in a winter coat.

You know, I suppose
metabolism doesn’t
just take place in the organism.

You know I suppose
elements of your dress
are mixing with your blood
and carbohydrates are
your feather-coat cloud.

This is chemistry, not eroticism.

This is chemistry, maybe even aesthetics,
but in no way
an imaginative confession of love.
This diffusion of dress and soul
is explained by my chemistry book.

I know already
that my yellow shirt is
an uncensored yellow
and has not even a trace
of diffusion with the fury of Van Gogh’s Sunflowers.

On How A City Gets Published Each Day

They start working at dawn, the proofreaders and city stylists.
They mow the lawns,
paint the facades of buildings,
reconnect broken cables,
read the streets line by line
like professionals:
this dog should not be here, let’s take it off;
let’s add a newsstand between these two trees,
and down there, at the end of the street
a trash can should be placed but
let’s change the street name.
Right there we need to correlate a supermarket with its original text—
citations from American life,
those the city just recently approved.
Frankly, many tasks wait to be done,
but not out of weakness.
Every morning there’s a steady diligence;
they stick their noses in the dusty volumes and
do their never-ending jobs:
replace the street tiles,
re-paint billboards in accordance with each holiday,
hang the street signs
and, finally, bring this stylistically corrected
city to the Night Editor for publishing.

Drawing a Line between Meteorology and Poetry

I
Finally one should refuse to use
Words denoting elemental phenomena,
Especially when depicting
Human spiritual experiences and frames of mind.
Poetry of the present and the future must be able to do without.

II
I watch through the window.
The rain rains in poems sung for the thousandth time,
The snow snows in poems sung for the thousandth time.
I go outside.
There’s nothing poetic about the wind.
It just makes my trousers flap,
Strikes my face and confuses my thoughts,
Which pretty well confirms
My theoretical deliberations:
Poetry and meteorology
Have over time come to quarrel with each other,
And now’s the time for them
Each to mind their own business.

My grandmother (on my father’s side), Mariam Iatashvili,
Was a meteorologist.
My grandfather (on my mother’s side), Parmen Rurua,
Was a poet.
Since childhood the things that sounded most poetic to me
Were the names of various types of cloud.
My grandmother would point to the sky and teach me,
“Cumulus, stratocumulus.”
But a lot of time passed after that.
And today I,
However regrettable and odd it may be,
Am coming out with an exposé
Of the unpoetic nature of meteorology
And the unmeteorological nature of poetry.

IV
I expect you realise,
This is no easy subject.
All the more so if you’ve written lines, like:
“The wind is in the soul, o watery-eyed Maria,
The wind is in the soul, whether it’s dark or day-long light…”
And quite a few similar other things.
Yes this is no easy subject.
But I am nevertheless doing this
So that in future life and poetry
There should be no rain falling from my eyes,
No snow falling on my hair,
No wind lurking in my soul.

V
I wrote this poem
As a weather forecast for poetry
And I walked out into the street,
Where an unpoetic wind
Flapped my trousers and
Hit my face.

My money is beautiful.
Like having a flower, a tree, the sky,
“Gioconda”,
These are beautiful things,
But my money is beautiful, too.
It lies in my pocket and I can touch it —
It’s little and much loved.
It’s so enchanting without being coy,
I can show it to you again and again,
And I can fix it to my buttonhole like a tulip.

My money,
My money…

This is a colourful performance,
This is a poor decoration,
This is the shiny skin of non-existence.

I will strip it away and enter into existence,
where there is a flower, a tree, the sky,
“Gioconda”.

You know, life is beautiful,
If you attain it with beautiful money.

When I become an old man,
I think I shall give my beautiful money
To the museum of life
As a permanent exhibit.

People will come and enjoy
Looking at my beautiful money.

They will think about it,
What’s good about it,
When your money is as beautiful
As your pregnant wife.

Shota Iatashvili was born in 1966 in Tbilisi, Georgia. He is poet, fiction writer, translator and art critic. He has published a significant number of poetry collections, four works of prose and a book of literary criticism. In 2007 and 2011 he won the SABA Prize, Georgia’s most prestigious award, in 2009 International Poetry Award “Kievskie Lavri” (Ukraina), in 2018 polish literature award of Klemens Janicki for poetry book “Golden Ratio” and in 2018 Vilenica Crystal Award in Vilenica International Literary Festival (Slovenia).

He has been invited to Portugal, to the seminar of translators, where his poems were translated to Portuguese (Casa de Mateus, 2007). Currently, he is editor-in-chief of the literary journal Akhali Saunje (newsaunje.ge) and consultant of Tbilisi International Festival of Literature (http://tbilisilitfest.ge).