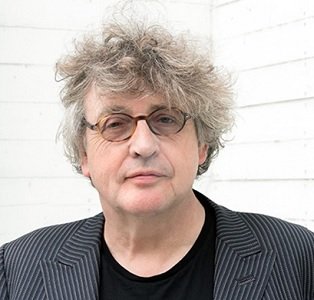 It might have been a gristmill, a dilapidated granary or grange
I first drove by some sixty years ago
and, with my little eye, espied
through a door-frame the tousled ferns
and red-haired dockens
of kids my own age sent out to play in the snow,
their snowballs
so specific in the sprawl.
Windowless now, roofless, tucked

under the first, sheltering hill of a range
that ran all the way to Mexico –
a country into which we still hoped to ride
hell-for-leather, still hoped to adjourn
after the stick-up – this ruin betokens
not only the slo-mo-
mowing of a meadow for a shopping mall
but the fate that would befall
the many tagged and retagged

over those sixty years. The landscape is so marked by change,
the bungled peace process, the shoddy bungalows,
the wind farms taking us in their stride,
so marked by all the turns
things have taken
for kids now summoned back from playing in the snow,
the nettles almost as tall as its dividing wall,
a ruin seems the only thing intact.

my resolve to raise the bar
back at the milking parlor. Taking their name from the Viking
term for a “burr,”

clegs have a way of spiking
a story whilst splashing it all over the front page.
I’ll be damned if I’ll let them come within striking

distance of my home patch.
The green of the cesspool is the green of ceremonial grade matcha.
Having made a botch

of my exposed forearms, the clegs now mooch
about the hindquarters of a heifer.
The bullock that had long since seemed to have lost his mojo

takes off across the water meadow like a zephyr.
Since I am no longer wont
to be targeted as Chilon the Ephor

was targeted by his fellow Spartans, when it comes to sustaining wounds
the clegs and I are pretty much even-steven.
The midges, in the meantime, have thrown caution to the winds.

the best of us. The purple of Jesus’s robe is so ingrained
I may find it difficult to commit, in my new version, to Matthew’s “scarlet.”
I should be able to organize a workaround

in the matter of paying off the “harlot.”
There’ll be no stopping the presses. That’s one of the translator’s perks.
I’ll be damned if I’ll allow those varlets

to confine me to barracks
like the monk who offered me matcha in the Ryoan-ji temple in Kyoto.
The description of Saint Paul “kicking against the pricks”

I’ve chosen to render as “kicking against the goads”
so as not to offend any shrinking violets
among the money-lenders. I’m not going to dress up “a den of iniquity,”

though, when it comes to the playing of skin flutes.
I’m happy to go with the flow
particularly if the story stays below the fold,

given how a warble-fly
in the ointment is sometimes perceived by the hoi polloi as a major hurdle,
as if it represents some kind of character flaw.

The fact that a rabble tends to rouse the rabble
is no less true of our raised bogs
than the Boulevard Saint-Germain. It’s only another ripple that sends the ripple

across a stagnant ring over which the midges box
so clever. My horse tugs at her halter
as if they’ve set their beaks

at her rather than me. Even the monk illuminating my version of the Psalter
views this world in terms of the column inch.
I’ll be damned, too, if I’ll falter

before the invisible. If the idea of a garden where everything seems to hinge
on one of its fifteen boulders
always being hidden from view sends a shiver through my palfrey’s haunch,

it also makes my own unease look paltry.
It’s true, of course, that Saint Patrick’s claim to have herded swine on Slemish
connects him to Saint Anthony, another consensus-builder,

even slightly mar
my ambition. Incorporate, I always say, as a monk incorporates the hole of a warble
on a sheet of vellum into the phrase “less is m(   )re.”

on water lilies in a sunken discothèque.
Though you may have her pegged
as a wuss, she has scant
regard for the predations of bear or coydog,
ranging out across the muskeg

to strip a dozen willow trees
of their painkilling bark and shoots.
Some nights she’s got up in hot pants,
others a kind of knitted mohair mini-dress
set off by platform boots.

The desert would be an ocean were it able to withhold
its judgment on wavelet after sand-wavelet
and suspend itself over its own floor.

It’s not only death’s a Great Leveller.

My email somehow ended up in your spam.
I hope you know it was only a rough draft.

Though it may be twelve thousand years old, the creosote,
it’s not the pitch Noah used, in the Flood,
to keep his tanker afloat.

Then there’s that other desert plant for which to flower
is to signal distress – to send up a distress flare.

by unambiguously drawing a line in the sand.
The gates and railings are finally taking a firm stand

and even more emphatically bringing things to a close.
The exit wound is their approximation of a rose

or a geranium under gauze on the window sill.
Gangrene. The green and gold of the first full-blown daffodil.

Also rendered, so it would even more tellingly rend,
was lead stripped from the gutters and flashing. For lead will bend

along a spine as it did along a walnut ridge post.
What was once an outer sanctum is now the innermost.

Shouldered as rifle stocks, after a mere three weeks of drill,
the bannisters are gradually taking another hill.

Surrounded as he is by the blood spatter
from the cut and thrust over an idea to which he was but briefly wed,
the fly is washing his hands of the matter

till the smoke clears. A wildcatter
on a rig still lumbering across the North Sea’s bed,
surrounded as he is by the blood spatter

and spout of crude, he remembers only a scatter
of crudités, heavy hors d’oeuvres, glasses, remembers seeing red.
The fly is washing his hands of the matter

now a meal in an upper room has once again served to shatter
his illusions. Overcome by the high hum of the dead,
surrounded as he is by the blood spatter

from the cruets of oil and vinegar, the fly is tempted to spray attar
of roses on the aforesaid
“fly washing his hands of the matter,”

if only because the internet chatter
points to a city about to cede to the forces of Ethelred,
surrounded as it is. By the blood spatter

the fly might embrace an earth that is irredeemably in tatters
(a banquet of slivers and shreds
surrounded, as it is, by the interplanetary blood spatter),

might heed the pitter-patter
of unborn fly-feet on the stair tread.
But the fly is washing his hands of the matter

even as he contemplates a platter
complete with its severed head, now the centerpiece of the spread.
Surrounded as he is by the blood spatter
the fly is washing his hands of the matter.

Paul Muldoon was born in County Armagh in 1951. He now lives in New York. A former radio and television producer for the BBC in Belfast, he has taught at Princeton University for more than thirty years. He is the author of thirteen collections of poetry including Moy Sand and Gravel (2002), for which he won the 2003 Pulitzer Prize, and Frolic and Detour (2019), as well as Selected Poems 1968-2014 (2016). Roger Rosenblatt, writing recently in The New York Times Book Review, described Paul Muldoon as “one of the great poets of the past hundred years, who can be everything in his poems - word- playful, lyrical, hilarious, melancholy. And angry. Only Yeats before him could write with such measured fury.”