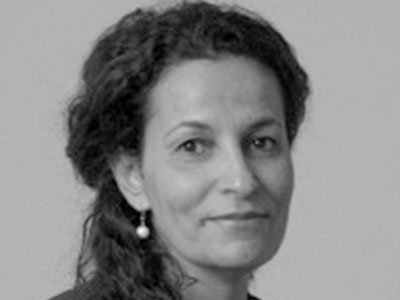 We had a cow named Obeida,
With wide eyes
Except that the whole herd’s eyes were wide.

She had mucus in her nose most of the time
That made it a little disgusting,
This was the case with the rest of the herd that we owned,
Their noses are filled with disgusting mucus.

And when Obeida was grieving she had tears in her eyes as if it was human
When we take away her calves
As we did with the rest of the herd,
They would grieve
As if they were humans.

Obeida would get nostalgic so she would moo loudly in that case
It would moo loudly which broke our hearts
We the children were hiding under the sheets
As if we were hiding from a monster
Before the day light so we could announce ourselves later,
By urinating in the wild one by one behind the house
As if we are writing down our entrance to life by this spontaneous way.

And the sun recites its spell over our heads
Then we run to the plains.

As if we knew our way from another life
And now we repeat it without any mistake.
Even we knew the place of the small stones.

Even the yellow snakes
We didn’t miss the time it would passes by.

In every mouth there was bread
And in every hand a thin stick snipped from a poppy tree
Which we called for the entire childhood:
The bitter Orange Tree.

We run and lead the herd with our sticks
In front of us the whole herd of cows
Obeida in the forefront,
And the dog that was called
Camel.

When I reached puberty,
The sign was that blood was bleeding
From between my thighs

Instead the tears
From my eyes.

My father took me to the scrap market.
My father said:
You grow up
The time has come.

I was afraid
That we were going to the

Animal market,
It was Thursday
And I was afraid that my father will buy
Instead of me

An ox
To plow the ground. They have told him:
She is thin and ferocious
And the "she"
Was me.

My father said:
From here.
I didn’t know why "here" exactly.

After grabbing it his hands trembled
Then he said:

Extend your hand.
I was staring at my father’s hands
Then I woke up

extended my hands
And dragged

From an old box
A used name.

My father said
Here everything is cheap
Affordable for the poor
And laughed.

While closing my eyes
Opening my mouth
A bird pooped in it.

When I got home
I throw my name

And poured water and salt over it,
Left it overnight
Next day,

I woke up before everyone
Grabbed my name

Washed it with the steel wool
Until it shines.

There was a fabric
Divided
For our blood.

We hung it out on clotheslines
Only hot air
Console it
Pushed by the sun’s mouth
Passed into it cheeks.

We did not throw what tighten and faded
From our cloths
For more than one reason.

One of those reasons
That we would cut it
And put it between our thighs.

For what and how many
Were these clothes enough?
To cover our skins
Or For summer covers
Or to prevent our blood from leaking
To the ground.

No one knew about
Those fights
That we were living,
We the little girls

And they the big women
Against the insects that invaded the fields,
Against the flies that hovered over the food,
Against the mosquitoes that fell in our tears,
And against blood,
Which was dropping between our thighs?

In those respects fallow.

Even after the climate was moderate
Plants grew
And greenery covered the soil.

It was blushing alongside the
Green, brown, yellow black
And Red colour.

The red rose was blooming
In tomatoes,
And in the bodies of peasant women
Only one or two
Would lick it off  the tip of  her finger
Out of curiosity

Then the taste of mold and saltiness

That out flowed of everything
Was discovered.

We had an empty lemonade bucket
Shorten it and hang it in the well
Filling it with water.

And we had a crock  jar
We sew the burlap sack which was the sugar bag
And dress the jar.

We had our nickel cup of water
Everyone found a place to their mouth
Leaving their marks with a dent or a scratch
So that the other does not drink where they drank.

This cup was ten mouths wide
For my mother, who refused to leave an imprint, we made one for her
And my father, who got angry at our playfulness, hitting the cup on the ground

And each one of us wore the other's clothes,
Even the scarecrow wore my mother's dress,
The water bottle wore my father’s undershirt,
The water pump wore my father's pants,
And my huge uncle wore a tiny sheep fur,

And I wore my late sister’s uniform
To the school.

Ahlam Bsharat is a Palestinian writer who born in Tammun village, Jenin province, northern Palestine, in 1975. She is a poet, storyteller, novelist, children's author, and creative writing teacher. Her books have been very successful locally and internationally. They have been included in the lists of the International Board on Books for Young People (IBBY), shortlisted for the Palestinian Book Award (UK) and the Etisalat Prize for Children's Literature (United Arab Emirates). She has conducted creative writing workshops at the Emirates Literature Festival in Dubai and has participated in numerous creative writing forums in Europe.

Two of her novels, My nom de guerre is Butterfly and Trees for the Absent, have been translated into English and her most celebrated Arabic juvenile novels are: Mary, the Lady of the Astrolabe; Ginger and Factory of Memories. Her latest publication, The Name of the Bird, is a book of poems rooted in her peasant origins. She speaks of village life with rawness and frankness in these poems, and without the usual romanticization of this subject. Her forthcoming book to be published, Oral Taste, recounts her evocative memories of food while growing up in the Palestinian valleys. She is currently working on a book that recounts her personal experience living in the region.