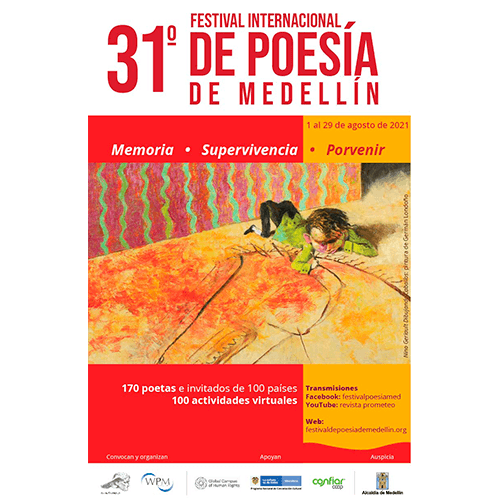 With the confirmed presence of 185 poets and guests from 100 countries from five continents, the 31st International Poetry Festival of Medellin will be held virtually from August 1 to 29, 2021. It will be a space for meeting and reflection, rooted in the spiritual and cultural tradition that is contained in poetry, about the present time, the future we wish and want to move forward. A journey through the poetic and philosophical thought of the contemporary world, guided by the urgency of founding a luminous horizon for humanity, at a time when humanity and life are threatened and restricted in their freedoms and possibilities, because of the pandemic and governments with different interests to the welfare of its citizens.

Humanity today faces great challenges, poetry is the essential language that, expanding endlessly, allows us to live more deeply and to visualize what it is essential that we must do, personally and as a society, to stop desertification, the disappearance of species and dehumanization.

Poetry enables dialogue between different cultures, making this encounter a universal dialogue of great quality and depth. Poetry gathers the cultural legacy of each people, reflects with broad vision, responsibility and creativity, showing what makes us truly human, how beautiful and simple is the love for life, solidarity and the embrace of peoples. The rich conjunction of voices and thoughts that will be found in the Medellín Poetry Festival make it a privileged space of knowledge, emotions and sensitivity, bringing together 170 emblematic personalities from 100 countries of five continents.

In a time of isolation and bewilderment, the Festival will once again be accompanying for a month, with top quality programming and guests, the Colombian people and followers from all over the world who, in 2020, celebrating its first 30 years, deployed a virtual manifestation without precedent in the world: for 70 days, 200 guests performed 132 poetry readings and dialogues from 103 countries, saluting our journey. 385,000 attendees, from a hundred countries, celebrated this conjunction of diverse voices, discovering in them the profound uniqueness of the human being: its past, its becoming and its future.

From the Asian continent, we highlight the presence of Adonis (Syria), pioneer of modern Arab poetry, winner of the 1994 Nâzım Hikmet Prize, the 2000 Alain Bosquet Prize, the 2008 Max Jacob Prize (France) and the 2011 Goethe Prize, nominated several times for the Nobel Prize for Literature; Ko Un (South Korea), activist for peace and reunification of the Koreas, several times nominated for the Nobel Prize for Literature; the poet Michel Cassir (Lebanon), Grand Prix de la Francophonie 2008; and Ibrahim Nasrallah (Jordan-Palestine), winner of the Arar Literary Prize. From China there will be Hu Xian, Lu Xun Prize, 2018; Li Shaojun, editor-in-chief of the monthly magazine Poetry; An Qi, initiator of the Generation in-between.

In order to democratize participation in this meeting, the Festival has opened a CALL for entries for poets from all over the world, which is open until 15 May.

Every year a visual artist accompanies the Festival with his work, and this year it will be the visual artist Germán Londoño, who was born in Medellín and has had multiple solo exhibitions in Colombia and abroad, with the series "Caballos, Guerreros y Desastres" (Horses, Warriors and Disasters).

The festival is convened and organized by Prometeo Magazine, Prometeo Art and Poetry Corporation and World Poetry Movement. It is supported by the Mayor's Office of Medellín, the Global Campus for Human Rights, which is part of the educational initiatives of the Right Livelihood Award Foundation, and Cooperativa Financiera Confiar.

For this year that the pandemic has hit hard the economy of cultural initiatives, despite the event being recognized as Cultural Heritage of Colombia and that the Colombian Ministry of Culture announced to have the largest budget in history for culture, also it announced a reduction of 50% of the budget for the Festival.