The Nomadic Agreement With Nature 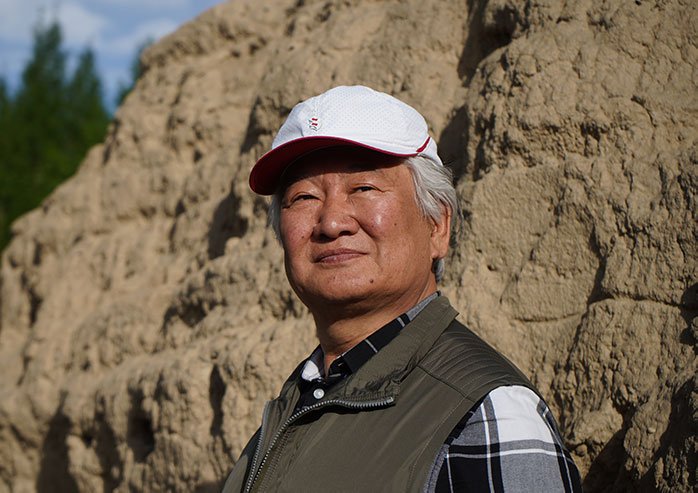 It is the land that shifts between the nomadic and the sedentary. When I was a child, I would move among the livestock herds on our nomadic journeys. My family herded a thousand sheep for a collective farm. We had some of our own sheep, too, a few riding horses, and three camels for carrying loads. We had several cows for milk, and we lived on the nutrition granted us by our animals. The nutrients from the grasses followed according to the weather, we loaded our ger onto a cart pulled by our three camels, and moved off with our few livestock. Nature remained, gentle and unchanged. My father drove the livestock forward, and my mother dealt with the fuel from dried dung, so I was the one who led the nomadic caravan. My father pointed in the direction of where we were headed: “Move us towards those blueish hills,” he would say. Later, the shapes of those blueish hills would remain clearly painted in my mind.

We arrived at our new site and, after a few moments, we erected the round walls of the ger, raised the roof-ring, set up the struts and rafters, pulled the cover over the frame, and tied it securely with ropes. Our possessions and furniture were stored in four boxes. These were all set out on a quilted floor covering. The nomadic lifestyle is both simple and practical.

Three items were set on the altar at the back of the ger. A black rock called “Altan Ovoo” in a wooden box. A wooden horsehead fiddle. And an ancient text wrapped in a yellow cloth.

When the fire had been lit, my mother boiled the tea and offered it first before the black rock. Then she went outside and sprinkled it into the sky of our new home.

“Tenger, who watches over us, protect us! Ground, upon which we stand, protect us…!” she would whisper, her palms joined in prayer, to the four cardinal directions and the eight directions in between. Mongolians regard Tenger, the sky above us, as our father, and the ground beneath our feet as the mother of all. The hills and mountains, the waters and springs and vegetation, and the rocks and cliffs are honored as intelligent entities, living and with souls. The stone had been welcomed as an object of worship from the sacred hill of our region called Altan Ovoo. In this stone, the blessing of Altan Ovo was preserved. In other words, it was Altan Ovoo in miniature. We thought of Altan Ovoo as the world in miniature.

My first significant collection of work was called Altan Ovoo (1993). This volume reveals the fundamental wisdom of nomads, the honoring of nature.

My father took the horsehead fiddle from the altar and produced music, letting the peaceful melodies of the wild steppe resound. The sky outside glistened, the steppe grew calm, beyond the door, the livestock were peaceful, the horses at the tethering post whinnied, and the birds sang above the roof-ring. My father played and played.
“Zee, Tenger above our new home, the local spirits and protectors, will protect us.” And with that, he placed the fiddle on the altar.

It was said that this fiddle had been crafted and carved by my grandfather, that he had carved on it the head of a famous horse of our region of Dariganga called the Jaahan sharga, and that the strings were made from the tail hairs of a racehorse. Nomads say that the original horsehead fiddle coaxed the landscape, that it pacified wild animals and calmed livestock, and this was because the melodies of the fiddle had their source in nature.

I subsequently published The Book of the Horsehead Fiddle (2002), in which I wrote, “The horsehead fiddle creates the calm of Mongolia. Accordingly, it pacifies the world.”

Every evening, my mother would take the book in yellow covers and go outside and walk clockwise around the livestock, then three times around the ger, and bless our foreheads before returning it to the altar. The words “May good fortune flourish!” remain still in my mind. I once asked my father,
“Father, what is it that’s inside?” He answered me kindly,
“It’s the words spoken by our teacher, the Buddha. I don’t know how to read it, though.” And then, “The writing with which these words are inscribed holds a living wisdom.” That’s what he said.

I later explored deeply the subject matter of the text. This “Sutra of Good Fortune” was spoken by the Buddha, and whenever it is welcomed, written, or read, it clears away all bad luck, and spreads all that is good. In it, we read, “The sun and the moon and the stars of good fortune reside in the sky. The five elements of good fortune reside on the earth. The wisdom of the holy Buddhas of good fortune of the ten directions and the three times reside between. May the good fortune of all of these reside in this time and in this place.” I wrote a novel, The Holy One (2012), about the holy man Danzanravjaa, an educator and poet who had an extraordinary intuition for nature, and in my research, I came across Danzanravjaa’s explanations of this text, and realized that I had a spiritual relationship with the book’s propitious meaning.

The nomadic life is in decline throughout the world. Lines of tourists and travellers come to Mongolia’s wild steppe and desert to observe the culture of nomadic people. And adjacent to them, vehicles hurtle across the steppe to bore mines for copper and gold. Over the years, the waves of globalization have been moving across the steppe.

Humanity is today facing a test. Our mother the Earth is losing more and more species, her rivers and lakes are drying up, and the speed and frequency of natural disasters such as desertification, tsunamis, and earthquakes is increasing. Future developments in science will end up replacing the gifts to human beings from nature, while the good heart and loving-kindness that is a human being’s natural character will be drowned in technology. The riches in the womb of the earth will quickly be exhausted. The political struggle and warfare over nature will take over the earth. On the other hand, epidemics and famine will bring suffering. Our mother the earth is growing ever more susceptible.

At this time, with the voices of poets all around, where exactly are our words most needed? As this question plays on my mind, I can see the stone from Altan Ovoo, the ancient horsehead fiddle, and the text in yellow covers on the altar of the ger which was bequeathed to us nomads by our ancestors, and I am thinking clearly about the transcendent meaning held within them.

The stone, the fiddle, and the text all say that humans and the natural world care for one another, that they share an understanding, they talk through the natural melodic rhythm of the heart, and use words to express wisdom.

I am constantly thinking about how the stone from my homeland is united with nature. My father’s horsehead fiddle plays the music of my poetry through the rhythm of nature. And the “Sutra of Good Fortune” extends a blessing through the magic power of words.

These three precious wish-fulfilling jewels, in which the ideas of nomadic wisdom have been preserved until the present day, constitute an agreement with our descendents from the depths of our ancient culture.

As the pto this agreement, these three precious jewels which I have inherited from my father and mother, I have taken them into my simple understanding and through my intuition I have taken on the work of revealing them through my poetry and bringing them into the future.

The heart of poetry beats with a rhythm which courses through the veins of the natural world, and by opening the natural qualities of the human mind through this poetry, our planet can become a peaceful world. This is an idea which firmly defines the work of that poetry which has its roots in nomadic culture.

With this in mind, I want to say that poetry is a language between humans and nature, and an agreement to reveal the spiritual relationship which exists between them.

I embrace the stone from Altan Ovoo as my world in miniature, I hear the melody of the horsehead fiddle as the rhythm of the heart of Mother Earth, and I realize the “Sutra of Good Fortune” as the wisdom of the ancient ancestors; and now they are continually expressing the voices of our own time:

Mend-Ooyo is quoted saying: "My life is the mirror of Mongolia. I grew up in the classic nomadic way of life, then moved to the city. But even after all these years I am not a city person. All my dreams are about the countryside, and I feel like I am living in a birdcage. Now I am planning to move back to the countryside. I just hope Mongolia will too". Mend-Ooyo started writing poems at the age of thirteen. In the late 1970s, he was one of the founder members of the underground literary group GAL (Fire). GAL transformed during the 1980s into an "independent flow of literary writing called GUNU", whose writers "nowadays exercise(s) the greatest influence on Mongolian literature."

In the 1980s, Mend-Ooyo was allowed to publish some of his poetry after it was vetted by officials. Later, in 1988, Mend-Ooyo became a member of the Mongolian Writers' Union. Altan Ovoo (Golden Hill) is an ongoing work of poetic fiction that has become one of the most influential pieces of contemporary Mongolian literature. First published in 1993, its fifth edition was published in 2010. Gegeenten (The Holy One), published in 2012,[13] is a modern example of the traditional Mongolian genre of namtar, non-canonical biographies of Buddhist saints intended to be read by common people.

Mend-Ooyo has been awarded many prizes from literary organizations around the world. Most notably, he has been named Distinguished cultural figure of Mongolia, by decree of the President of Mongolia in 1996; received the Award of the Mongolian Writers' Union in 1999; and was named Best Man of the Year 2001, and honoured as one of the nine most renowned people in Mongolia. In 2001, Mend-Ooyo was awarded the Altan Ud (Golden Feather) award, Mongolia's Writer of the Year.[18] In 2006, the year of the 800th Anniversary of Great Mongolian Empire, Mend-Ooyo was awarded the Anniversary medal by the President of Mongolia. In 2012, Mend-Ooyo once again received the Altan Ud award, for his book Gegeenten. (Wikipedia)