Speech of acceptance of the Alternative Nobel Prize 2006 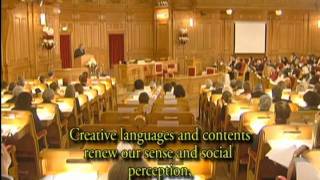 This video contains an passage from the acceptance speech of the Alternative Nobel Prize, Right Livelihood Award 2006, received in the Swedish Parliament to the International Poetry Festival of Medellin, headed by the poet Fernando Rendón, "…for showing how creativity, beauty, free expression and community can flourish amongst and overcome even deeply entrenched fear and violence." It has Madosini musical background with Pedro Espi-Sanchis acopgçmagnion, whom participated in 21 International Poetry Festival of Medellin.

As director of the International Poetry Festival of Medellín, I must express that I gladly accept the honor of the Alternative Nobel Prize 2006 granted to our organization, also represented here by Gloria Chvatal and Gabriel Jaime Franco. I am grateful for this generous award to our postulator, mister Bengt Berg, and to the juries of this Prize, most necessary for the history of the latest humanist and visionary thought. We are also grateful to the tireless philanthropist, Jakob von Uexkull and to mister Ole von Uexkull, executive director of Right Livelihood Award.

I come from a country bled by a war of forty years that has left half a million dead, devastated towns and barren fields. Our country does not know peace. After the victory of Simon Bolivar over Spain in the War of Independence, in 1819, there were nine main civil wars during the nineteenth century. As if it was not enough, a war against Ecuador in 1867. The War of the Thousand Days between 1899 and 1902 led to the separation, incited by the United States, of Panama from Colombia, and caused the death of 120,000 fellow countrymen, out of a small population of 3 million. A war with Peru in 1928. And other nine great civil wars during the twentieth century. A popular insurrection in 1948. The creation of armed liberal groups. The formation of paramilitary groups by a law of the Senate. A coup détat in 1953. The bombing of Marquetalia and numerous places in our land that were the origin of the creation of the Revolutionary Armed Forces of Colombia (FARC) in 1964. The foundation of an archipelago of rebel groups. The genocide of 4000 leaders and members of the Unión Patriótica, which continues. The Colombian state accepted responsibility for this genocide before the Inter American Human Rights Court. The Supreme Court was bombed by the army. Four presidential candidates are assassinated in less than three years. Four million farmers and indigenous people are displaced and deprived of five million hectares. 150 journalists are assassinated since 1980; freedom of the press disappears. There are 12000 missing Colombians. Thousands of citizens are kidnapped. The Plan Colombia. The Patriot Plan. The fumigation of illegal crops, imposed by the United States, destroys our ecosystem and our biodiversity. A river of blood continues flowing under the bridges. Our people resist. It is the oldest war in our time, and one of the longest in human history. There is no definitive victor in this war but it worsens the material, cultural and ethical deterioration of Colombian society.

The Attorney General, Mario Iguarán, in an interview published the newspaper El Tiempo of October 19 of this year, declared in relation to the actual situation suffered by Colombia: There is an unfortunate collusion of the paramilitary not only with the political class, but with the civil authorities, the armed forces and the judicial administrators, including the public prosecutors. It is as matter of financing political campaigns threatening voters and ransacking and sharing out the state as if it were booty. It is an offensive and unjustified handling of public resources and public employment. It is a criminal scene of such magnitude that even prosecutors and judges are tainted.

What are the causes of the present Colombian conflict? Since more than a century ago Colombia because of its strategic geographical situation, its unlimited natural resources and its privileged biodiversity is an objective of the United States that for decades has divided Colombians in a fratricidal war, combining the use of state and paramilitary violence with meager social programs. This process has only been possible due to a gigantic cover-up operation of national and international journalism. Then news is distorted to impose oblivion, since Colombia is the beachhead for the expansive military, political and economic dominance of Latin America by a power that completely and in many ways despises international law. 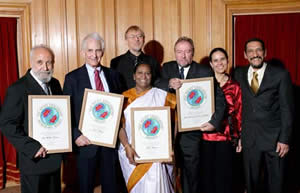 Ceremony in the Swedish Parliament,
recipients 2006 and Jacob von Uexküll

Colombia is a key in the process of breakdown of authoritarian power that feeds on war in this and other parts of the world. To reach a just peace to weaken that power, we require more than ever the solidarity of the community of nations of the world and especially of the European Union. Colombians cannot be condemned forever to suffer the tough wearing away of an arms buildup, while at the same time there is an increase of unemployment, hunger and displacement in the country. We, on the contrary, back the opening of talks on humanitarian interchange of prisoners between the Colombian state and the FARC, opening the way for a creative political dialogue, toward a negotiated political solution between the parts in the conflict, so that Colombia can have its first and definitive peace.

According to Amnesty International, more than 70% of political massacres and assassinations have been perpetrated by paramilitaries. Hundreds of peasants were murdered with power saws. But only a handful of paramilitaries will pay light penalties in a vacation center. In a wholly militarized and paramilitarized country, in which the human, social, economic and cultural rights of the people are violated on a daily basis and where a total impunity prevails, the war budget under the present government of Uribe Vélez has had an increase of 334%, from 2.5 billion pesos to 8.6 billion pesos for 2007.

Meanwhile, the Colombian government is arranging new taxes against culture and for war, embodied in the text of a new tax reform that will severely affect the art and cultural programs with the greatest national impact. As an example, there will be taxes of between 10% and 16% on poetry books and reviews, on writers royalties and prizes granted to writers and poets, translations of poems and proofreading.

Authoritarianism attempts to strike culture because it is a power in itself, since it is formed by the values and symbols with which peoples identify in a given moment of human history. When the transforming values and emancipating cultural symbols are highlighted the unity of the peoples occurs, and their intellectual activity, their perceptions, their creations, their identity itself and their historical vocation are affirmed.

We must strengthen the collective historical memory of our peoples, developing a general cultural resistance, to bring the vision of a humanist horizon to fruition, in a united world of justice, beauty and solidarity. To arrive there it is necessary to strengthen the dialogue between poets, artists, intellectuals and scientists of the world and vigorously contribute to the intertwining of their projects, with the purpose of unchaining a powerful global movement of culture and human spirit, to face the future with a creative imagination. 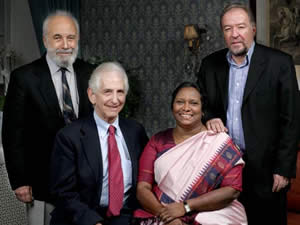 However, not the political declarations but the transforming action of the peoples will transform this thorny human history. We must poeticize and accompany these actions and changes, which will be complex and painful. Creative languages and contents renew our sense and social perception, our thought and our creative dream of human history. Great historical transformations, as well as art and poetry, are destined to make the world younger.

The storm looks for the supreme hour. Let a powerful movement break all limits. Let each instant be a great wave of dreams that wells up to increase thirst, to oppose adverse reality and bring down death.

In the last decade of the twentieth century, only in the city of Medellín there were 45,000 violent deaths, more victims that in all Western Europe during the same period. The International Poetry Festival of Medellín was founded in 1991 amid a situation of terror that strangled all citizens. Bombs and car bombs exploded all over the city in the course of a war of the Medellín cartel against the Colombian state, when Medellín was marked as the world capital of drug trafficking. We then opposed poetry to extreme violence; we designed a dream machine to confront the perverse machinery of nightmare. For one can ask as the maquis poet René Char: What is reality without the displacing energy of poetry? Since then 747 poets from 132 countries of all continents have read their poems to hundreds of thousands of persons in Medellín and 34 other Colombian cities.

The International Poetry Festival of Medellín, through an energetic and massive poetic action, firmly exercises the rights of freedom of conscience, assembly and free speech, the right and the duty to contradict the reality of an authoritarian state, as a demand for the deepening of political and cultural democracy in Colombia, for a negotiated solution of the war and for the building of a country for life.

The New Zealander poet Michel Harlow said in Medellín in 2006: When you have difficult governments, they try to eliminate your identity. And I believe that it is a good sign in Colombia that so many young people are interested in finding out who they really are. And he added: People have an insatiable desire to belong to themselves again. And because they hunger so, they understand that art and poetry are the way to be oneself, to belong to oneself.

The German poet and philosopher Hans Magnus Enzensberger wrote: This is all an enigma: all ask themselves how it is possible: a metropolis of violence burns with desire to listen to poetry Maybe one must travel to the other end of the Earth to be free of that atmosphere of insensibility that prevails in our cultural scene, to be convinced that a few verses who would have thought of it! can still inspire a whole city, just as in Homeric times.

The mission of the International Poetry Festival is to contribute to the development of a language and a poetic conscience of nature, society and history, in millions of persons in the world.

The French poet Yves Bonnefoy said in interview for our review Prometeo: If new festivals are created, it would be much better that it be in the circumstances of Medellín, that is to say, in the frontiers of evil, for it is in the line of battle against frauds and injustice that you have the greatest need for poetry.

The Alternative Nobel Prize 2006 granted to the International Poetry Festival of Medellín is a recognition of the historic role of poetry, in opposition to the culture of death that has its origin in the authoritarian spheres of transnational power. The poem is an exaltation of a vision of the future made for all. It sings loudly the transformation of the human spirit and the struggle of peoples, for the certainty of an age without oppression.

We shall come back on the grass to intone the hymn of dawn. The unchained stone will again be light. In the great new times, ours will be the pulse of spring and of the farthest star. This and all the worlds will belong to all. The hour of a new life will shine: the triumph of life over death.