I Worldwide Summit of Poetry for the Peace of Colombia 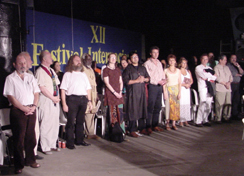 Far from decreasing, the situation of civil war in Colombia has shown a tendency towards progressive escalation in recent years. Four years of peace talks laid the foundations for an eventual negotiation, but both sides continue to grow in military power and aggressive action. These talks, like all the preceding ones with the FARC insurgent groups, have had a fundamental flaw: they have never been more than talks, and never real negotiations regarding the essential problems affecting Colombia.

The conflict has incremented the migration people displaced by force. This is an immeasurable human drama that adds to the already highly complex situation of the country: almost three million displaced persons have lost everything, including their surroundings, their traditions and their cultural roots. This situation exists alongside an unemployed army that reaches up to seven million inhabitants.

Under these circumstances, the creation and strengthening of spaces that would pressure and favor the pursuit of a negotiated political solution becomes indispensable. The cultural sector, marginal, neglected and largely dissociated from the present situation, ought to have an increasingly constructive role within this process, because of its humanitarian character, and as the bearer of our fragile identity.

Within this context, the XIII International Poetry Festival united 60 poets of the world today, in the quest to strengthen the option of a negotiated political solution. The for the Peace of Colombia was held between the 16th and the 19th of June, 2003. With invited poets, national government, political representatives of Colombia, cultural entities, official entities, national and international Human Rights organizations, displaced associations, NGOs, artists, writers, journalists, academics, and personalities to participate, so that their presence and opinion may be heard and taken into account for their specific weight on public opinion and among the direct actors of the conflict.

The Summit was centered on five main themes, each of which had three or four orators. Each one had a space of twenty minutes to present his proposal. Once the proposals was completed, the deliberations and debates was proceed.

The Summit had two recorders at all times who will work independently. 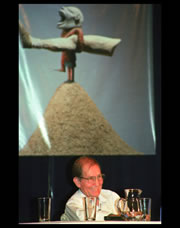 From a cultural point of view, its evident that the medium-term consequences of globalization on so-called national cultures are as massive as they are unpredictable. Colombia is a country of clearly visible regions from a cultural point of view, but with identities that are still being formed; nationally, it doesnt either seem as though we possess a defined identity. The conflict in Colombia cannot be attributed exclusively to economic causes, something proven by the fact that countries with the same or similar problems with poverty havent tried to solve their differences with weapons. The incidence of our culture on the conflict hasnt been evaluated sufficiently, far less that of globalization upon that culture, and we feel that its important to tackle the problem from this perspective.

The following have confirmed their presence as orators on this subject: the poet Thiago de Mello from Brazil, the Colombian Minister of Culture María Consuelo Araújo; the Viceminister of Cultura from Venezuela, Francisco Sesto, Mateo Morrison Sub secretary of the State of Culture from Dominican Republic, and the Ambassador form France in Colombia.

2. The Writer and Politics.

In good measure, writers are the expression of the nationality and a critical thermometer of any culture. In Colombia, most writers are marginal or have become divorced from the drama. This may be just an external appearance, but certainly, as Jorge Enrique Adoum says, many of them are returning to hope. As we tackle this subject, we want to analyze the current state of the writers thinking, and their eventual incidence upon public opinion and the creation of an atmosphere for dialogue and a possible reconciliation between Colombians.

The following poets have confirmed their presence as orators: Saadi Yousef from Irak, Amiri Baraka from the United States and Enrique Buenaventura from Colombia.

Among the many undesirable effects of war, one is particularly dramatic: The forced displacement of the civilian population. In Colombia, close to three million persons, most of them under age, have had to abandon their lands to protect their lives, and to assume them under conditions of extreme hardship and inequality compared to their fellow-citizens, whom frequently marginalize and are aggressive towards them. We hope to tackle this subject from a cultural point of view, taking into account the loss of contact with their environment and their roots that these victims of forced displacement have undergone.

The poets that have confirmed their presence as orators on this subject are Juan Gelman from Argentina and Gonzalo Rojas from Chile. There will also be a presentation by the Colombian writer and historian Arturo Alape, and from a representative of the Colombian National Coordination for Displaced Persons.

One of the sad records that Colombia boasts is that of murdered Labor Union and Human Rights directors. The effects of the expansion of the agrarian frontiers (largely as a consequence of the worldwide issue of drug trafficking) on the devastation of our countrys forests is incalculable. And, although protected by the Constitution, Colombias ethnic minorities are in conditions of prostration and poverty that prove a serious threat to their existence, something humanly unforgivable and culturally irreparable. Another area where human rights violations are evident is in the secular violation of the populations human rights, which is expressed in many different ways.

The poets that have confirmed their participation as orators for this subject are Abadio Green of the Tule-Kuna ethnicity in Panama, Jack Mapanje from Malawi, and Alfredo Vanín from Colombia, as wells as Jairo Ramírez in representation of the Permanent Committee for the Defense of Human Rights in Colombia.

5. The Colombian conflict as seen by the poets.

It wouldnt make much sense to hold a Worldwide Summit of Poetry for the Peace of Colombia without allowing those poets who live and suffer within this country and its conflict to express their views upon these issues. It would also be a way for Colombians to know what their writers think and propose, what they can do, what they want to do, and how willing they are to assume the consequences of that way of thinking.

The orators that have confirmed their presence for dealing with this subject are the Colombian poets Juan Manuel Roca, William Ospina, Samuel Jaramillo and Fernando Rendón as representative of the Prometeo Poetry Magazine.

We, the poets gathered at the first world summit of poetry for the peace of Colombia declare our shock and cry in defense of the millions of persons that suffer today as displaced and civil victims of the present outrageous Colombian war.

The conflict has a total military logic, which assumes more and more an unjustified unacceptable and inhumane character. The majority of its victims are common people specially women and children.

We note with disappointment that the government has chosen the politics of total war. Even though it is supported by an important sector of the population, the government is not only investing huge amount of money in war for a country that is morally and materially bankrupt, but we fear that its politics of" Democratic Security" is being used to hide the social crisis, this policy is affecting adversely the peaceful labor sectors and silencing constructive criticism, making the human rights situation deteriorate.

The war itself is presented as the cause of the crisis, but it really has, as we all know, its origin and its oldest nourishment in the social injustice and exclusion which people suffer.

Unfortunately, the guerrilla has turned to inhumane practices such as kidnapping and the assaults to entire towns, in which the main victims are the people. In its predominant method of fighting and illogical reasoning, this has encouraged the military logic to overcome any other peaceful political considerations.

The paramilitary groups, supported by privileged sectors have killed peasants, laborers, teachers, reporters, even presidential candidates and have contributed in a very decisive way to the massacres and degradation of human life. Conflict and terror have, sadly, resettle.

The causes of the war are many. The violence promoted by the globalization, the boom of drugs and its mafias, the weapons traffic, the opening of markets that min local economies and the greed of imperialism over our biodiversity — these and other forms worsen the Colombian situation, making the last land war and the first globalization war for the future, even calling for a foreign intervention.

We declare that war is not the solution to war. That a politically negotiated peace is imperative. This will silence the arms and bring civil peace, social justice, respect for the ethnical and cultural diversity and for the communities that war desegregates. This will bring serious efforts for education and dignity to millions of persons.

This is the time to realize how big the abyss is between the future that promises us the hardships of an ever ending war, and the path that a political negotiation with social justice will open for us.

The war may be a pride on the lips of the empowered people, but it is blood and misery to the humble towns and hopeless neighborhoods of Colombia. This summit believes in Und appeals for a peaceful solution. This is the only way for the Colombian people to decide the future of their nation.