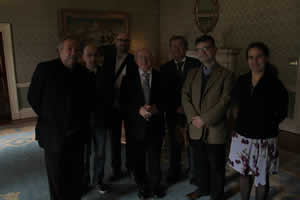 The opening of relations with the Irish Government through the poet and president Michael Higgins, who will preside the Council of the European Union during the first half of 2013, the World Poetry Movement visibility to renowned international bodies such as UNESCO and the European Union, the realization of financial possibilities by applying for funds from these and other cooperation agencies, the development of collective work with groups of poets in different European countries and the entry of new festivals, poetry projects and poets, situations that make up new perspectives and dimensions for the poetry, were the main achievements of the recent tour through Ireland, France and Belgium of some members of the Coordinating Committee of the World Poetry Movement, accompanied by poets who are part of this organization.

On 15 March, a delegation of WPM has interviewed for about 40 minutes with the Irish President Michael Higgins, at the Palace of Áras an Uachtaráin in Dublin. President Higgins welcomed the establishment of the World Poetry Movement and shared the goals and objectives contained in the WPM Strategic Plan, taking careful note of it. He suggested that he would accept our invitation to be patron of WPM, waiting for our official request. He expressed his wish to meet again with members of WPM during his tour over Brazil and Chile in the month of September. He invited a delegation of WPM to attend the opening ceremony of the President of Ireland in the European Union Council in January 2013 and offered to help in bringing closer the World Poetry Movement and the forums and various participatory models in Europe.

On March 22 there was an interview with Katérina Stenou, director of the Intersectoral Platform for a Culture of Peace and Nonviolence, attached to UNESCO in Paris on which we presented the nature and proposals of WPM. Mrs. Stenou explained that it is possible to establish mechanisms for mutual cooperation between UNESCO and WPM in areas where violence is prevalent as a wrong system for the resolution of interest conflicts. She expressed interest in our activities and objectives and expressed interest in a possible financial support WPM once the conditions for developing the application are achieved. To the WPM purposal for the creation of a World Poetry School over the Internet, Mrs. Stenou said that it could be part of a bilateral agreement to include a link to this vital project in the UNESCO Web. 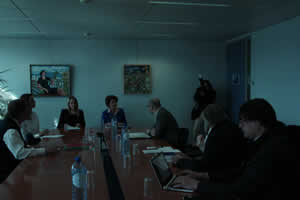 On March 27 it took place in Brussels the meeting with Androulla Vassiliou, Commissioner for Education, Culture, Multilingualism and Youth of the European Commission, and Cecilia Cave, Director of the Translation Department of the European Commission. The result of this meeting can be summarized in the clear possibility for making applications starting in 2014 in the creative program in Europe, the realization of programs of financial support for translations and teaching about poetry, WPM participation in a symposium on the role of art in contemporary society, within the framework of the European Union's Court in October.

Bilateral meetings were also held in Antwerp with Jan Vermassen, Head of Cultural Policy, Office of the Minister of Culture of Flanders; Michael Vandebril, chairman of the House of Literature in Antwerp and Brussels; and also with Geert van Istendael, Piet Joosten and Sigrid Bousset of the poetic collective Passa Porta, meetings in which we widely discussed vision and tasks of the World Poetry Movement and prospects of two-way cooperation with them. 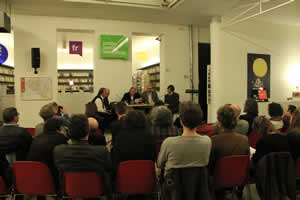 In the gallery Motif of Paris, during the celebration of World Poetry Day, March 21, WPM made a poetry reading with the participation of poets Francis Combes and Stéphane Chaumet (France), Hatto Fischer (Germany), Greek Dino Siotis (Greece), Fernando Rendón, Myriam Torres and Jorge Montoya (Colombia) and Amina Said (Tunisia). On March 26 in Antwerp and 27 March in the library of the poetic collective Passa Porta in Brussels, it wsa held a similar exercise with the participation of WPM poet members. Bas Kwakman made an introduction in all the three places about the active presence and the community of interests and objectives of WPM in today's world.

During this trip WPM was joined by the International Biennial of Poets of Val-de-Marne (France), Poetry Ireland (Ireland), and the group of poets Passaporta (Belgium), among others.