"Towards a thousand years of peace for Colombia" 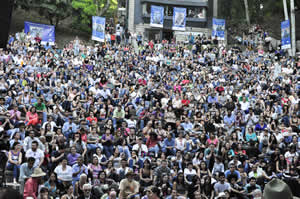 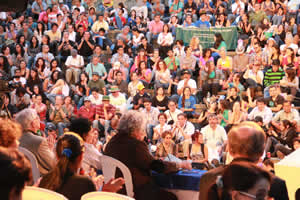 "If there is peace, spring will come"

On July 6, 2013, the solar splendor of the afternoon and the groups of people travelling from different parts of Medellín towards the Nutibara hill, summoned to be a part of the mythical audience of the Medellín International Poetry Festival, radiant in their collective conscience, reminded us of those solar rituals which celebrated the gifts and mysteries of Earth.

A contemporary experience, with the mythical essence of gathering around poetic vision, which becomes collective when a crowd, having honed its listening attitude, becomes a radiant unit, thanks to the unfolding of a great spiritual energy turned into a protective shield, through the powers of the poem resolved into the voice.

“Towards a thousand years of peace for Colombia” has been the motto, the message presented to all the local, national and world community during the 23rd Medellín International Poetry Festival, with the aim of promoting collective sensitivity through poetry, and thus contributing to the construction of a cultural and spiritual atmosphere, favorable to the advent of peace and thus to the end of fratricide, poverty, exclusion and social injustice".   READ MORE

For Re-signification of Myth and Utopia

The 23rd annual International Poetry Festival of Medellin will be held from 6 to 13 July 2013, a symbol of resistance possible through the virtues of the poetic word that represents and unites us, to help transform places of fratricidal violence into spaces for coexistence and the celebration of life.

With the participation of 60 poets from 45 countries, from the far corners of the Earth, this new version of the festival will be dedicated to the poetic experience for the re-signification of Myth as memory that is foundational knowledge and of Utopia as acting reality that leads to a new humanism, freed from all the mistakes that sunk us into inequality and exclusion.

Myth as the supplier of a great legacy that must be preserved because it reminds us of the original flame that lights the path to the human experience reconciled with the world and its gifts, included in the processes of cultural growth and social justice.

In this perspective, the 23rd International Poetry Festival will appear in 150 cultural venues in the city of Medellín, municipalities in the metropolitan area, some municipalities of Antioquia, some cities of Colombia and locations at low-income neighborhoods, victims of violence and exclusion, with performances that are poetry readings by Colombian poets and poets from all around the world.   READ MORE