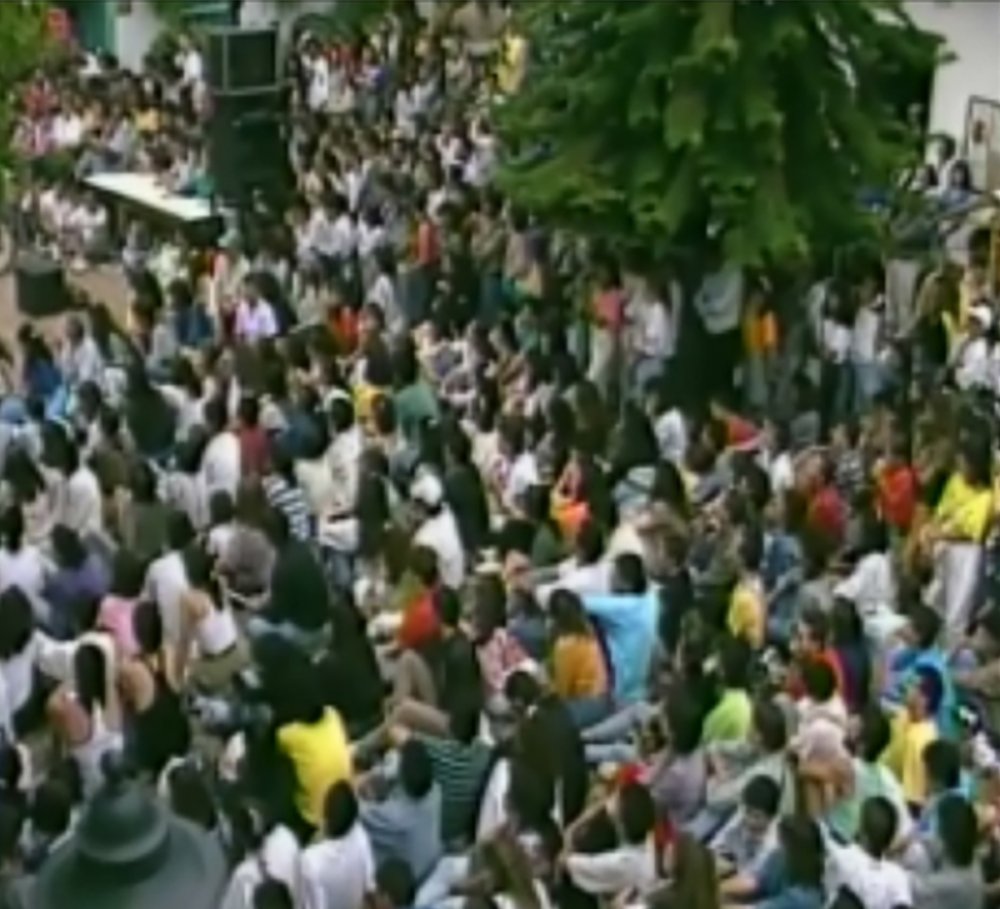 1991: they were fateful days It was inevitable to talk about the war, a war that continues in a new phase. Many were those that were murdered because they were adolescents, others because they made cracks in society through their social struggle, and yet others, because of obscure reasons. Selective political crimes. Crossfire. Bombs planted by drug-traffickers. Hired assassins. Indiscriminate massacres in public places. Death squads terrorized the city. There was high tension in the state of mind of its population and even daily language fell into a stage of deplorable decline, spreading violence and unease.

We know that it is in difficult times, in times when life and sensibility are more affected, when the spiritual expressions springs up with greater strength. It is in fateful times when poetry raises its gaze toward the summits where light is captured.

Already since the eighties signs that announced this moment of our history were evident, showing the precarious state of the human condition, and it was under these circumstances that were published poetry reviews (Prometeo, Punto Seguido, Interregno) that, with scarce resources, brought before the public the work of local poets. Many of them had a brief life and very few managed to survive. Anthologies of Colombian poets were published "Poetas en Abril", and the first poetry meetings were called by the Casa de Poesía Silva, under the slogan La poesía tiene la palabra (Poetry has its say). This is more or less the atmosphere that prevailed in 1991, when the International Poetry Festival of Medellín was founded.

Since 1982, the review Prometeo had constantly worked to spread the reading of poetry. It published world famous, established poets, and also local and foreign poets. Many were the authors and poetry movements that contributed to the formation of a new spirit. Their visions, poems and struggle to change life have had an influence on the nurturing of the spiritual transformation called for by our situation.

All this spiritual legacy of living poetry, in constant movement, influenced by historical facts and with a critical attitude in defense of human dignity, exerts a fundamental influence that leads the review Prometeo, with the support of the city Cerro Nutibara management, to call a city-wide "Poetry Day", on April 28, 1991.

They have an audience of some 1,500 persons. It is the way for poets to counter the constant spiritual deterioration of the city and the reigning darkness. Poetry readings, dance and theatrical adaptations of poems, theatrical monologues, and videos on the life and work of some Colombian poets, and creative writing workshops, are the events that make possible the establishment of new symbols, a more habitable dimension, and a collective imaginary peopled by visions awakened by the poetic sensitivity.

It is a vital collective action, intervening in the social sphere with the poetic word as a revitalizing spirit, just when many are losing their lives absurdly, in the horror of the slaughter. A fragment of the organizing committee expressed on that occasion:

"It so happens that in this city there is a vigorous growth of the poetic expression, from anonymity to that which is identified by the heart, a collective event which makes real Saint-John Perse´s call: "Let the poet say clearly to all the pleasure of living in this strong time. Our call is formulated in the signal that binds us together and becomes a ritual and a celebration."

One can see that the audience identifies itself deeply with poetry. One can perceive its cathartic action and hints about the possibility of reviving the liturgical being that survives in our innermost being. The whole city, in its different social levels, realizes the transcendence of this event, which since then has been part of its spiritual and cultural life.